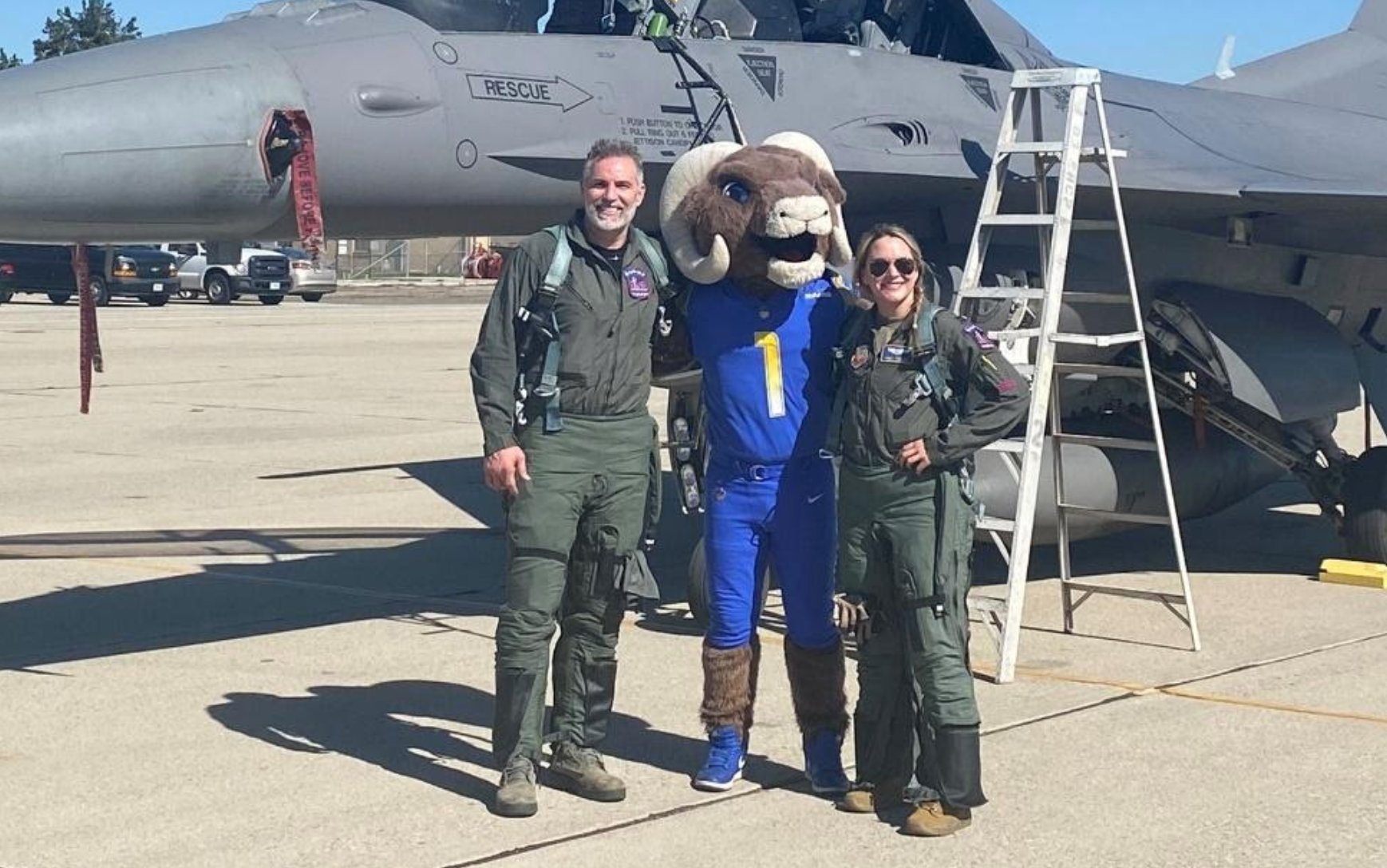 Kurt Warner has a remarkable American Dream story. The man who went from bagging groceries while fighting for a chance to play football ended up taking the then St. Louis Rams to an improbable Super Bowl win and two Most Valuable Player awards.

Known for being the field general for the Rams, “Greatest Show on Turf”, Warner joined the Greatest Show in the Air and was able to be a passenger in an US Air Force F-16 as a guest of the F-16 Viper Demonstration Team.

With the Super Bowl in Los Angeles this weekend, the pilots doing the flyover have been training and practicing out of Joint Forces Training Base – Los Alamitos. On Thursday before the Big Game, the NFL sent several legends, cheerleaders and the Rams mascot Rampage, to check out the planes taking part in the special flyover.

While the others got to see the planes up close, Warner got to get the ride of a lifetime. Air Force Captain Aimee “Rebel” Fielder took the NFL legend up into the wild blue yonder and pulled maneuvers that probably made being hit by a linebacker seem tame.

Before going up, Warner was given a short run through of the ins and outs of the plane. Going up in a fighter jet is never routine and the Viper Demo Crew took Warner through all the safety measures that need to be completed for even the simplest flights.

Warner also got insight into how arduous and complicated pilot training can be. While getting situated into the plane, he got a run through on communications, strapping in, and general controls. Learning how to strap into the cockpit is a 10-hour class by itself, Fielder told him.

Warner was airborne for about an hour and taken on various climbs, rolls and dives as Capt. Fielder showed her piloting prowess and the capabilities of the long-revered F-16 Falcon. Upon landing Warner disembarked and showed his appreciation for both his pilots’ skills and being back on the ground.

When asked how he handled the flight, Warner said, “Well I didn’t have to use the bag, but if we had stayed up there any longer, I probably would have!” When asked what callsign she would give Warner, “Rebel” Fielder joked that maybe it should be “Mercy” and Warner laughed and agreed.

Warner also met with the pilots who will be participating in the special 75th Air Force Heritage flyover on Super Bowl Sunday. For the first time in history, the Air Force will have a 5-plane formation consisting of legendary planes throughout the Air Force’s tenure.

Super Bowl LVI will be on Sunday, February 13 and will feature the Cincinnati Bengals against the Los Angeles Rams.