Why handling battlefield casualties was so gruesome during the Civil War 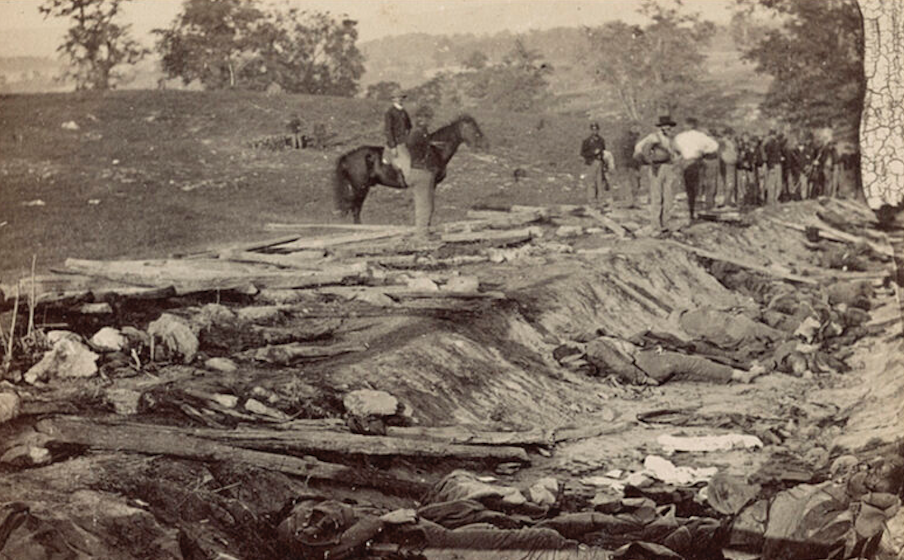 The Civil War produced casualties and war dead on a level previously unencountered by Americans and it was all happening in their farms, fields and in some cases, literally their own backyards.

Maj. William Childs said after the Battle of Antietam that the days following a battle are always worse than the battle itself. The war killed some 600,000 Americans and turned entire geographic areas into cemeteries.

When the battle was over and the smoke cleared, these battlefields were littered with thousands of dead and dying bodies, as can be seen in the photographs by Mathew Brady. Someone had to bury the war dead. Often this fell to Black soldiers and servants, in some cases the Union used hired labor but it could also be handled by anyone, including the local townspeople.

At the beginning of the Civil War, there was no set of rules in place governing the handling of dead and wounded for either side of the war. For a wounded soldier, the enemy wasn’t the only concern. They lay among the dead and the pestilence and disease breeding around them. They also had to worry about wild animals. Wounded troops lying on the battlefield might sometimes be moved, but they might not.

A post-battle truce could take place after a battle, but that was entirely at the discretion of the leaders of the opposing forces. Sometimes a truce was called to collect and bury the dead, sometimes it was refused.

In 1862, the Army of the Potomac finally enacted a policy of handling the dead and dying, establishing the first ambulance corps. It wasn’t until 1864 when the same policy was adopted throughout the Union Army, which established who, when and where they could operate on the field after the battle.

For anyone doing the burial, this could be gruesome work. They often did not have the tools they needed for the job, sometimes even foregoing carts or shovels. Burying thousands of men killed in combat took an extraordinarily long time, especially without the right tools for the job.

The dead of the Civil War were also not afforded coffins. There just weren’t enough available nor was there a distribution system in place to get them to the battlefields. The armies had other, more pressing concerns. Soldiers were buried at the discretion of whoever had come to bury them. They could sometimes be buried with reverence, sometimes with haste, other times buried after being stripped of their possessions and clothing.

With the bodies lying where they fell as people worked to dig their graves, the decaying bodies often sat in the sun and other elements awaiting their final resting place. The smell of the decay was so terrible and risk of disease so great that sometimes individual graves had to be discarded in favor of a large trench to place all the bodies.

Even once the bodies were buried, they might still need to be reburied. After the Battle of Gettysburg, a fight that killed around 50,000, they attempted to bury the dead where they fell in individual graves. They eventually had to forgo that in favor of a trench due to the number of bodies. Those that were buried individually were not buried deep enough and body parts soon began to breach the surface and had to be reburied.

As a result, mass graves became used more and more, often dug by the winning side, in haste to press their advantage. These holes could be very shallow, with not much cover on them. The dead would be revealed years later, as dogs and pigs dug them up, the topsoil eroded or were otherwise revealed by the elements.

Those with the means were able to have their loved ones’ remains returned for a proper funeral service and burial in a cemetery. Eventually Congress passed legislation in 1867 that allowed for the dead to be reburied in national cemeteries following the war, complete with fences, markers and a registry of those buried.