Why some foreign armies ‘goose-step’ while marching 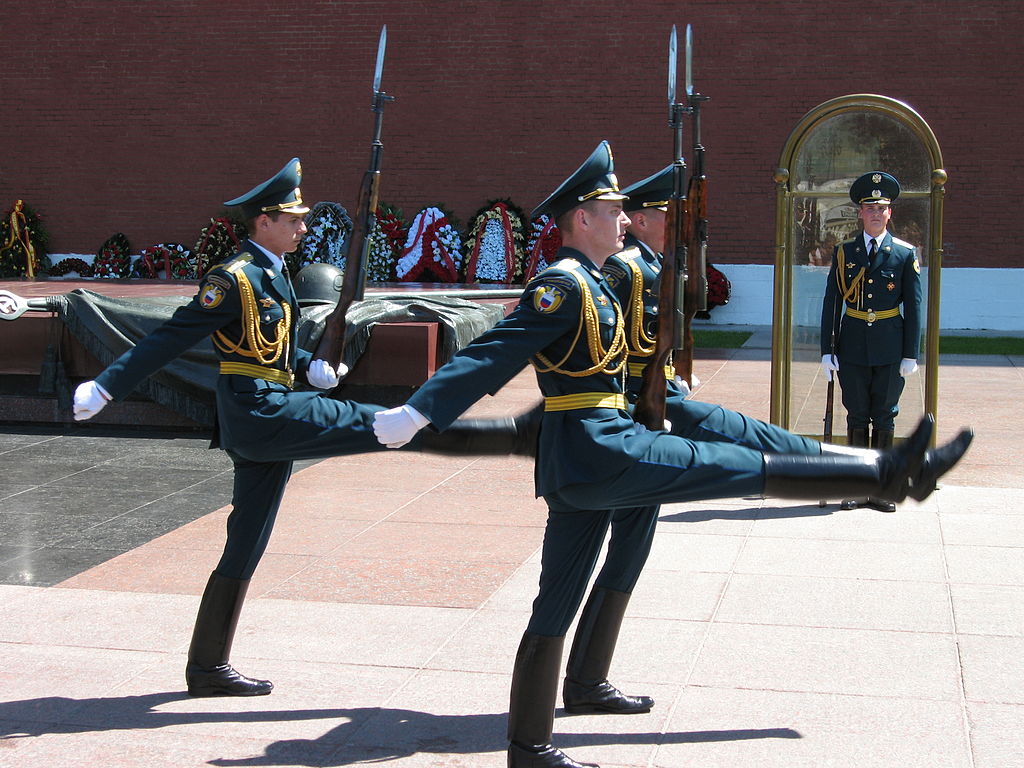 Russian Kremlin Guards goose-stepping at slow march near the Tomb of the Unknown Soldier, Moscow.

Although there are slight differences between the ways the branches of the United States Armed Forces march (a slight bend of the elbow, in case you’re wondering), in general its formal parade step is an elegant gait, markedly different from the way other militaries march.

The most glaring difference between the United States and foreign armies is that some of them “goose-step,” swinging one leg wildly in front of them while the other remains rigid and straight on the ground.

While today, the image of “goose-stepping” armies is usually associated with Nazi Germany, due to the many propaganda film reels of the German wehrmacht maching in unison across Germany (and many other countries). It actually dates back far further, to a time when the way armies marched actually made a difference on the battlefield.

Originally called the “Stechschritt,” or stabbing-step, the goose-step was used by the Prussian Army to keep its soldiers in a tight line formation. The step kept the soldiers close together and in step, forming a tight “moving wall,” which allowed for disciplined firing lines. In turn, tight firing lines allowed Prussian forces to increase its rate of fire, which keeping returning fire low.

It also had a psychological effect on the enemy army. Let’s face it, the sight of thousands of goose-stepping Prussians forming a massive wall of moving death is a little scary, a lot unorthodox, and a sight no one is interested in staring down for very long – and few did. The high rate of fire meant a hailstorm of bullets coming their way every three beats.

Like many battlefield developments, a good idea is a good idea, and it was adapted very fast by other armies of the day. It also instilled a higher level of discipline among troops of the era, which was necessary in an age where keeping tight formations could mean the difference between life and death for entire units, or a complete rout for an army.

In Britain, however, the Army used coordinated arm swings to keep time and distance while drilling its troops, which was better for operating in difficult terrain. When the British Empire extended to the America’s and then had to fight Americans, things got a little different. Marching, though, not discipline, became less important. The result was a marching drill that looked more like a walk than a field march or parade march.

Americans also focused more on accurate marksmanship than formation fighting, an important factor in fighting in the rugged, untamed wilds of some of the North American colonies. As time went on, formations and marching became less important, and more of an instrument to teach discipline and troop movements. The United States’ means of marching became more efficient, while European styles became more traditional.

After a while, even the goose-stepping countries gave way to a more efficient means of field parade marches. As other countries began to parade their armed forces, however, many began to adopt the goose-step style as more of a visual experience. Countries like North Korea and China have adopted it for these reasons.

In the west, goose-stepping armies became more and more associated with Nazi Germany and began to fall away from popular usage, even being ridiculed as a means of keeping discipline. During World War II, British generals believed the style was absurd and the troops would be laughed out of the streets.