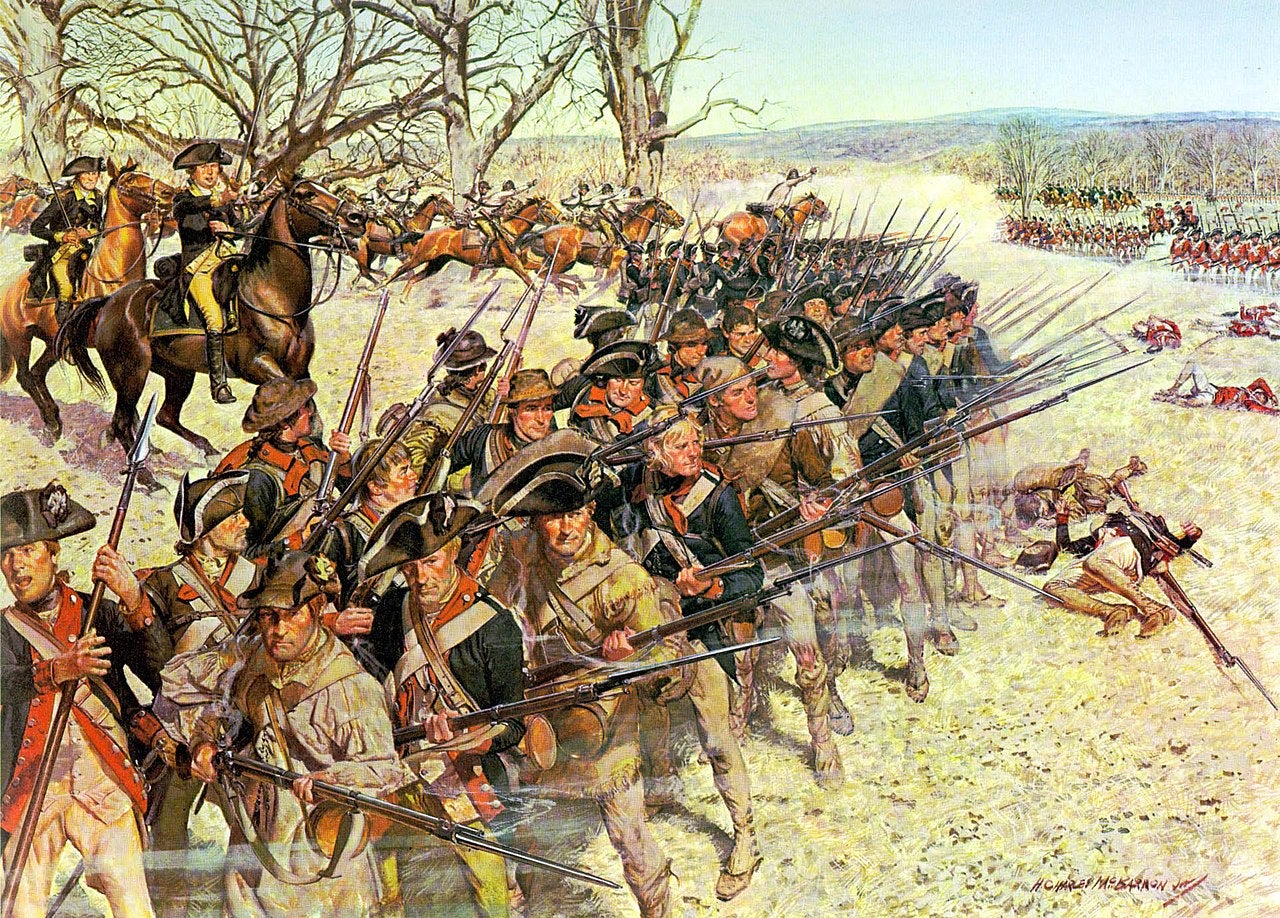 Painting of the Battle of Guilford Court House (March 15, 1781) from Soldiers of the American Revolution by H. Charles McBarron. "[General Nathaniel] Greene observed as the veteran First Maryland Continentals threw back a British attack and countered with a bayonet charge. As they reformed their line, William Washington's Light Dragoons raced by to rescue raw troops of the Fifth Maryland who had buckled under a furious assault of British Grenadiers and Guards." (Source: Center of Military History.).

To the modern eye, accustomed to seeing armies wearing concealing uniforms and even face paint, to avoid becoming a target, an army wearing bright colors and marching in formations on a wide-open ground seems insane.

After all, the point of warfare to the untrained eye is to kill as many of the enemy as possible while not being killed yourself, right? The whole point is to make the other bastard die for his country, right?

That basic premise is as correct today as it was back then. Today, however, armies place the emphasis of that doctrine on the “while not being killed” part, whereas the armies of old placed the emphasis on the “killing as many of the enemy as possible” part.

The difference is in the kind of weapons infantry could use and the power organized forces had over individuals. A long line of men, three ranks deep and firing at the same time can put out a lot of destructive firepower at one time. The idea was to maximize the number of guns shooting into an enemy formation.

There was power in those formations. Formations provided protection and cover from charges and cavalry while making it easier for commanders to control their men and communicate with lower officers. It also was a morale booster for the men in the formation. Against a loosely dispersed formation, the rate of fire could be devastating.

If a rabble of hunters and frontiersmen were taking on an enemy army marching in formation, as is so often (falsely) depicted to be the case in places like the American frontier, the difference in rate of fire would mean that for every shot fired from the loosely-configured forces, each man could expect an estimated 16 rounds coming back at them – at once.

Besides, having a small, loosely formed rabble hiding in a treeline to try and pick off hundreds or thousands of well-trained and well-armed soldiers at a distance is suicidal. The weapons of the time aren’t accurate enough to maintain enough distance to keep the rabble from  getting slaughtered, the smoke from the charge will give away their positions, and there probably isn’t enough treeline to hide enough men to actually take down a formation.

After firing their first round, the soldiers didn’t just take a knee to stop and reload, they countermarched to the rear so fresh troops with loaded rifles ready to go would come to the front. By the time the first three ranks were at the front again, they were loaded and ready for a new volley.

For anyone who thinks that firing a volley into a packed formation of soldiers is enough to scare off the rest of the formation, think again. The soldiers of yesteryear knew their lives depended on maintaining that formation. Forces who broke and ran became a loose formation, subject to the massed weight of fire any formation could shoot. It was far better for your own survival to march over your buddy’s dead body than turn and run.

Finally, men at arms in the armies of old did take cover whenever cover was possible, but on an open field, it’s not possible at times. Where armies of today would get into a prone position and make themselves as small a target as possible, soldiers of yesteryear would have a hard time reloading in a prone position.

After taking one shot, consider either rolling around on the ground trying to reload the muzzle-loading weapon you have or marching to the rear of a formation while you stand and reload standing up, behind a human wall, next to hundreds of battle buddies. Strength in numbers.