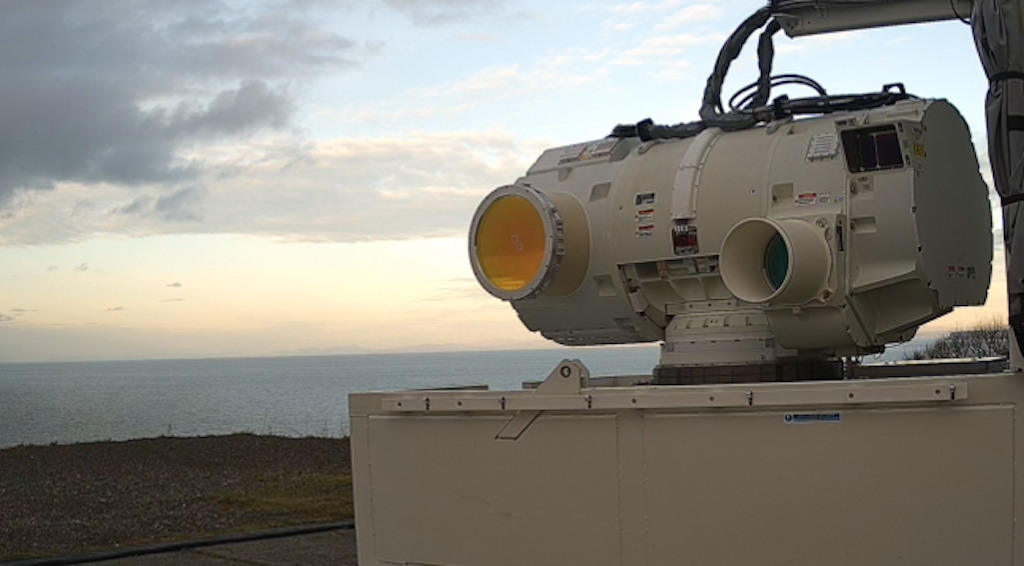 The United Kingdom’s first-ever high-powered laser directed energy weapon (LDEW) was test fired this year. Called DragonFire, it was tested at the Ministry of Defence’s Porton Down science park test range in Wiltshire.

The first test fire took place in July 2022, tracking and destroying targets in the air and at sea. Its second test in October 2022 demonstrated that the laser weapon could hit multiple targets with a 50kW laser at various ranges with pinpoint accuracy.

For comparison, Lockheed’s most powerful laser is 30 kW and can blast a car from a mile away. The DragonFire the United Kingdom’s own home-built super weapon.

The $114 million project was developed by the UK’s MBDA Missile Systems, which also created its advanced command and control (C2) system and image processing capabilities. Another UK company, Leonardo, built the beam director which focuses the laser while compensating for atmospheric conditions. Finally, the UK’s QinetiQ built its power source, a 50-kW solid-state, phase-combined laser generator.

Its combination of technology creates a laser beam with more power density and an increased effective range. The image processing system is also used for tracking using a second, lower power laser. How it focuses the energy is classified.

Recognizing the nature of modern warfare has changed, the United Kingdom’s Defence Ministry wants to develop its directed energy arsenal to hit various targets of different sizes at different speeds. The ability to eliminate weapons like drones and missiles at the speed of light without having to haul around things like costly ammunition would be a high-valuable weapon for any armed force.

Look no further than today’s most recent testing ground for weapons systems of all shapes, sizes and abilities, the war in Ukraine. Weapons new and old, from many countries and developers, are pouring into the battlefield of Eastern Europe. The two sides have brought new lightweight drones, homemade bombs, tank defenses, shoulder-fired missiles and more to the battlefield.

Some of these have undergone extensive testing before being provided to one side or another. Others were being tested for the first time. Many were successful. Others, like the Russian cages made to protect its tanks from projectiles, were infamous failures.

The next test for Britain’s DragonFire is a combination of the previous two successful tests. The third trial will be a mix of requirements from the previous two, testing the weapon on realistic targets and creating a practical application for its use in conventional military forces.

“Laser weapons are something that is brand new,” the Defence Science and Technology Laboratory’s Technical Partner, Ben Maddison, said. “We don’t know what the benefits are going to be… this has the potential to be something that could be absolutely game changing. Our current weapons are large, expensive and heavy. The logistics chain required to move them is extraordinary.”

The DragonFire was first released to the public at the 2017 DSEI Conference in London. Trials of the energy weapon were set to begin in 2018 with a full demonstration the following year. The global COVID-19 pandemic put the full demonstration off until 2022.