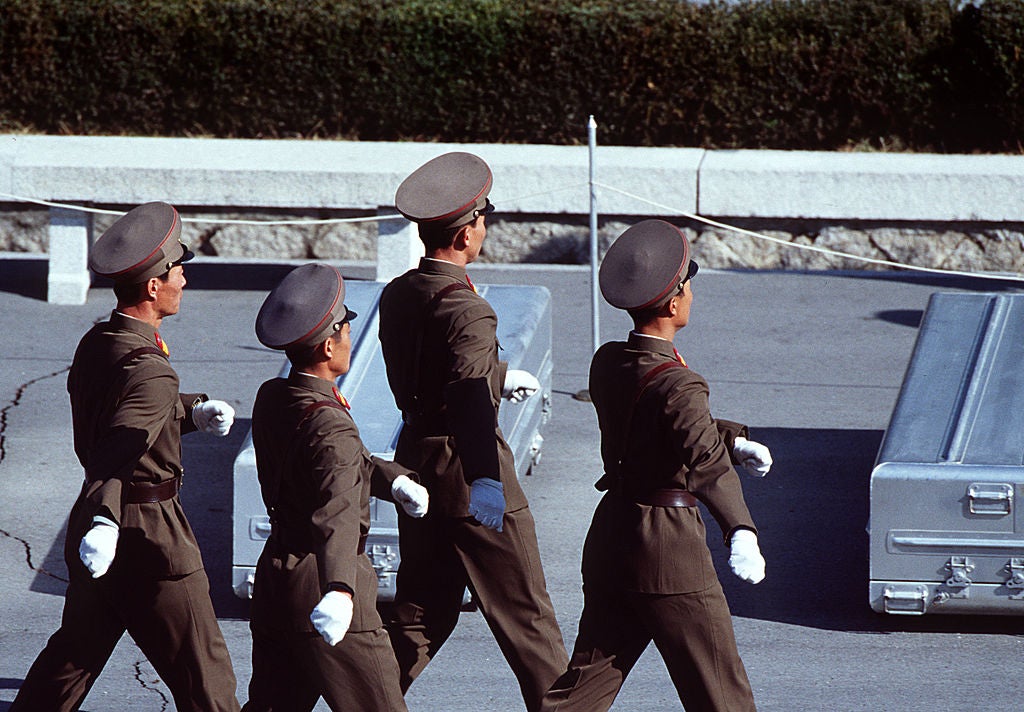 In North Korea, or at least, what North Korea shows to the country and the world in its propaganda and agitation, a hat is more than just a hat. Nearly everything we see is an indicator of status and position and hats are no exception.

When Kim Jong Un, North Korea’s current leader, appeared at a parade during his father’s reign wearing a fine fur hat while his father still ruled the country, it meant that he was a figure of rising importance in the Korean Workers Party. The KWP, who truly runs the country, would never have allowed anyone to wear something that had previously only been worn by his father.

That’s the way these things go in the North. Although members of the North Korean military are very, very far from the status of the Kims, their headgear is just as much an indicator of status as anything else.

North Korean service members have a number of uniforms, based on their job functions, where they operate, and how combat ready they are. It’s heavily-trained combat troops wear modern ballistic helmets, for example, while other units in combat uniform still wear old-style helmets that look like they came straight from the Korean War.

If combat ever comes, they’re still going to wear them into combat, they just aren’t expected to survive. Most of the North Korean military is used as an organized labor force, and many of them lack shoes, let alone proper combat headgear.

In military dress, the most common service hat worn by North Korean soldiers is a kind of kepi, a tall hat with a circular top and small visor, adapted from the European style kepis worn by a number of European nations. Kepis are still worn by members of the French Foreign Legion.

Then, there’s the ridiculously-sized, highly exaggerated hats of the North Korean People’s Army Ground Forces. They look like any standard military service cap found the world over, with the exception that North Korea’s look like they’ve been inflated with a bicycle hose.

This style of dress hat was adapted from the Soviet Red Army’s service cap, and like all service caps, the Russians’ were derived from the Nazi SS service caps. It’s easy to see why militaries would do this, the Nazis’ uniforms were designed by Hugo Boss.

It’s no secret, military brass love uniforms and they absolutely want the best-looking uniforms they can get. When a world-renowned designer is making military uniforms, other militaries are bound to steal the best looks.If you think this theory is silly, you haven’t been paying attention or haven’t been in the military long enough.

When it was introduced to the Red Army after the war, even the Soviets still called them “SS hats.” The Soviet Union then propped up the North Korean regime under Kim Il-Sung for decades, implementing many of the elements from its own military into North Korea’s. Over time, however, the North Koreans began to stray from Soviet-style communism, especially after the death of Joseph Stalin. As it did, the size of the service hats only increased.

Today, outsiders can see North Koreans sporting the inflated SS cap in photos with Supreme Leader Kim Jong Un, at border guards positions along the demilitarized zone near South Korea, and anywhere else foreigners might have a glimpse at North Korean troops. The reason is the hats are not only huge, they exaggerate the size of the person wearing them.

Since the North Korean famine of 1994, food shortages abound in North Korea and the lack of sufficient food in adolescence has led to North Koreans being smaller in stature than their South Korean counterparts. Giant service caps serve to make them look bigger and less diminished, and look more powerful to the outside world.

Like all things North Korea projects to foreigners, the absurdly large hats have another meaning and are a false front designed to make North Korea look better than it is in reality.