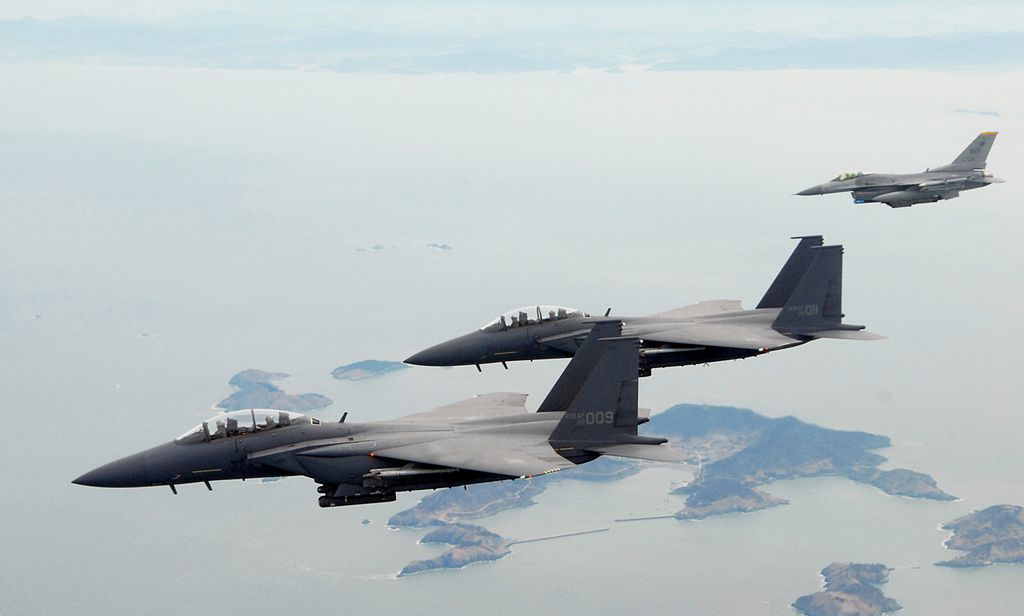 Two ROKAF F-15K strike fighters (foreground) with a USAF F-16C in the background.

For much of the 20th Century after the Korean War, the people of South Korea watched footage of North Korean military parades with a sense of fear. The North projected so much weaponry and manpower that most believed a war with North Korea would see the South overrun by communist troops. In 2021, that opinion changed.

South Koreans are still regularly exposed to footage of North Korean military parades, as they happen many times per year. North Korean leaders then give speeches about what the military means for North Koreans while highlighting the new weaponry that ensures their continued dominance over their southern neighbor.

The most recent parades have displayed weapons that should terrify citizens of South Korea. These included nuclear warheads and the intercontinental ballistic missiles (ICBM) the North would use to deliver those weapons. There are cruise missiles, submarine-launched ballistic missiles (SLBM), and mobile rocket launchers that can reach the South Korean capital of Seoul in minutes.

To top it all off, the North Korean rhetoric during the parades is ardently anti-South Korean, reiterating the North’s military might while reminding South Koreans they are the target for these intended weapons and that they should be quaking in their boots. But South Korea has been living close to this display for a long time, hearing the threat and seeing the weaponry. It just doesn’t have the same effect anymore.

A 2021 poll of South Koreans showed a number of reasons for the increase in public confidence for the South Korean military. The first is the joint American-South Korean alliance. The presence of American troops and the U.S.’ continued dedication to the defense of South Korea inspires confidence in their ability to fight the North.

Increased knowledge about North Korean struggles inside their own country also helps increase confidence in the Republic of Korea (South Korea’s official name) military forces. South Koreans know that the bulk of North Korea’s military are put to work in labor projects, including farming and construction, and were used extensively during the COVID-19 pandemic, decreasing their combat readiness.

Then there is South Korea’s own missile program, which in recent years has been revised by the alliance. The United States allowed the South to make increases in their missiles’ range and power that will make them more effective in the event of a North Korean attack. They may still be at a disadvantage compared to the North’s missile development, but in a tactical sense, any improvements are significant.

While the North Korean missile and nuclear systems are being developed, there are other areas in which South Koreans know the North just can’t compete. The North Korean military is still operating in a 20th Century military mindset, with nuclear weapons being the golden fleece of military deterrence. In a 21st Century mindset, one South Koreans definitely have, arenas of warfare have expanded to things like artificial intelligence, drones, cyber and space warfare. These are all areas where South Korea has a definite upper hand and the South recognizes its military for making those advances.

None of this means the South would come out of a new Korean War untouched. North Korea still fields the world’s fourth largest army, and has thousands of pieces of artillery and ground-based conventional weapons pointed at Seoul. But South Koreans fear the devastation a war would bring, not necessarily that North Korea might win such a conflict.