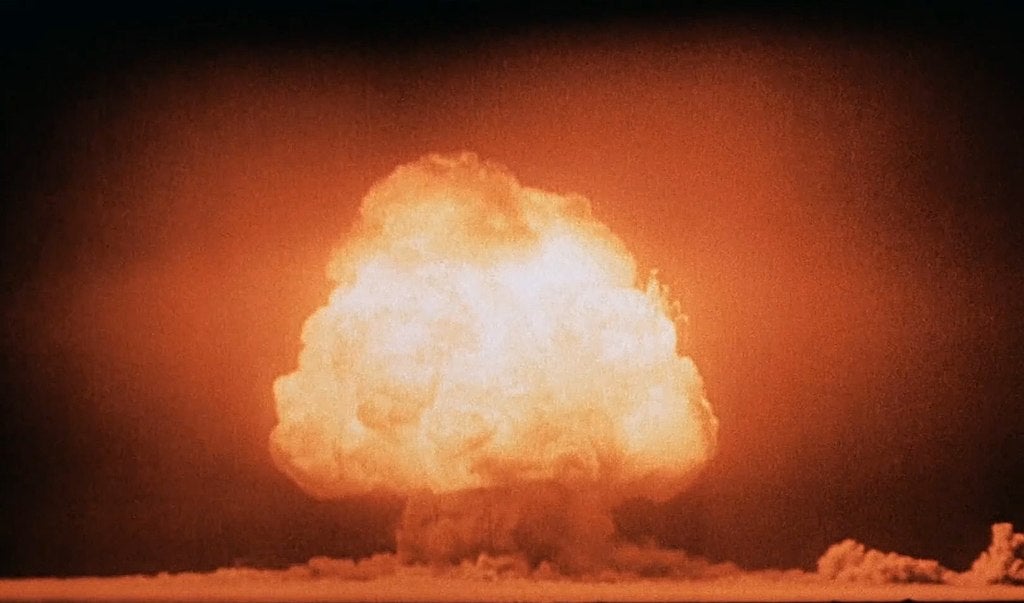 Mushroom cloud of 'Gadget' over Trinity, seconds after detonation.

When a nuclear bomb detonates in the air, it produces an enormous amount of heat, which is quickly dissipated. These conditions are suitable for massive volumes of nitric oxide generation. The oxides are subsequently taken into the higher atmosphere, lowering the protective zone percentage. According to a recent study, the immense columns of smoke produced by a nuke are enough to interrupt the world’s climate for decades and ruin the ozone layer, putting human health and food sources in jeopardy. The worldwide study presents a gloomier depiction of the consequences of a nuke than prior studies.

Several researchers employed recently established computerized climate forecasting techniques to understand more about the repercussions of a possible nuclear exchange, which included complicated chemical reactions in the stratosphere that control the quantity of ultraviolet radiation reaching the earth’s surface.

The deaths that occur relatively soon after, as well as the climatic and UV consequences, would be pervasive. It was discovered that pollution from numerous nuke detonates could destroy a large part of the ozone, with global ozone depletion culminating at roughly 75 percent. Even a local nuclear war would result in a worldwide ozone depletion of 25 percent, with regeneration lasting 12 years.

These effects would be detrimental to humankind and the ecosystem because the ozone layer shields the earth’s crust from damaging UV rays. Excessive quantities of UV radiation are related to skin cancer and immune system diseases. Agriculture, and terrestrial and aquatic habitats, are all protected by the stratospheric ozone.

Effects of the Nuclear Blast

The explosive blast is responsible for the majority of the destruction and injuries. Blastwave of air propagates outward, causing abrupt alterations in air pressure. This, in turn, squashes items and strong gusts that can take them down. Huge structures are generally destructed by the air pressure changes, whereas humans, animals, and objects are affected by wind.

The blasting impact is proportional to the altitude of the explosion above ground level. An ideal burst height for every single radius of the blast will generate the biggest alteration in air pressure, called overpressure. The larger this distance is, the higher the optimal explosion height. Consequently, a ground burst creates the most stress at exceptionally close distances but less overpressure at marginally longer distances than an explosive charge.

A massive hole is created when a nuclear bomb is launched on or around the earth’s surface. Most of the debris in the hole is dumped on the crater’s edge, while the remainder is transported into the air and back to earth as radioactive contamination. A blast that occurs higher in the atmosphere than the radius of the blaze leaves no hole and creates very little instant debris. The majority of the time, a nuclear detonation kills individuals indirectly rather than directly.

During the blast, intense radiation happens, which directly affects living things. Although the radiation has a lot of power, its reach is narrow; therefore, it might not affect people from outlying areas. The radius of severe radiant energy for big nuclear bombs is shorter than the radius of fatal explosion and radiation heat impacts. On the other hand, direct radiation may have the most devastating impact with the largest reach when dealing with smaller bombs.

Inhabitants of Hiroshima and Nagasaki were severely harmed by direct radiation, and are some effects still depicted in humans to date. The human reaction to radiation exposure is fraught with uncertainties and debate. Even little amounts of radiation appear to cause some damage. One thing for sure is that if there is a direct nuclear effect on living organisms over a short period, the impact might spread over many years. Knowing this, no one should be allowed access to nuclear weapons, no matter how powerful.