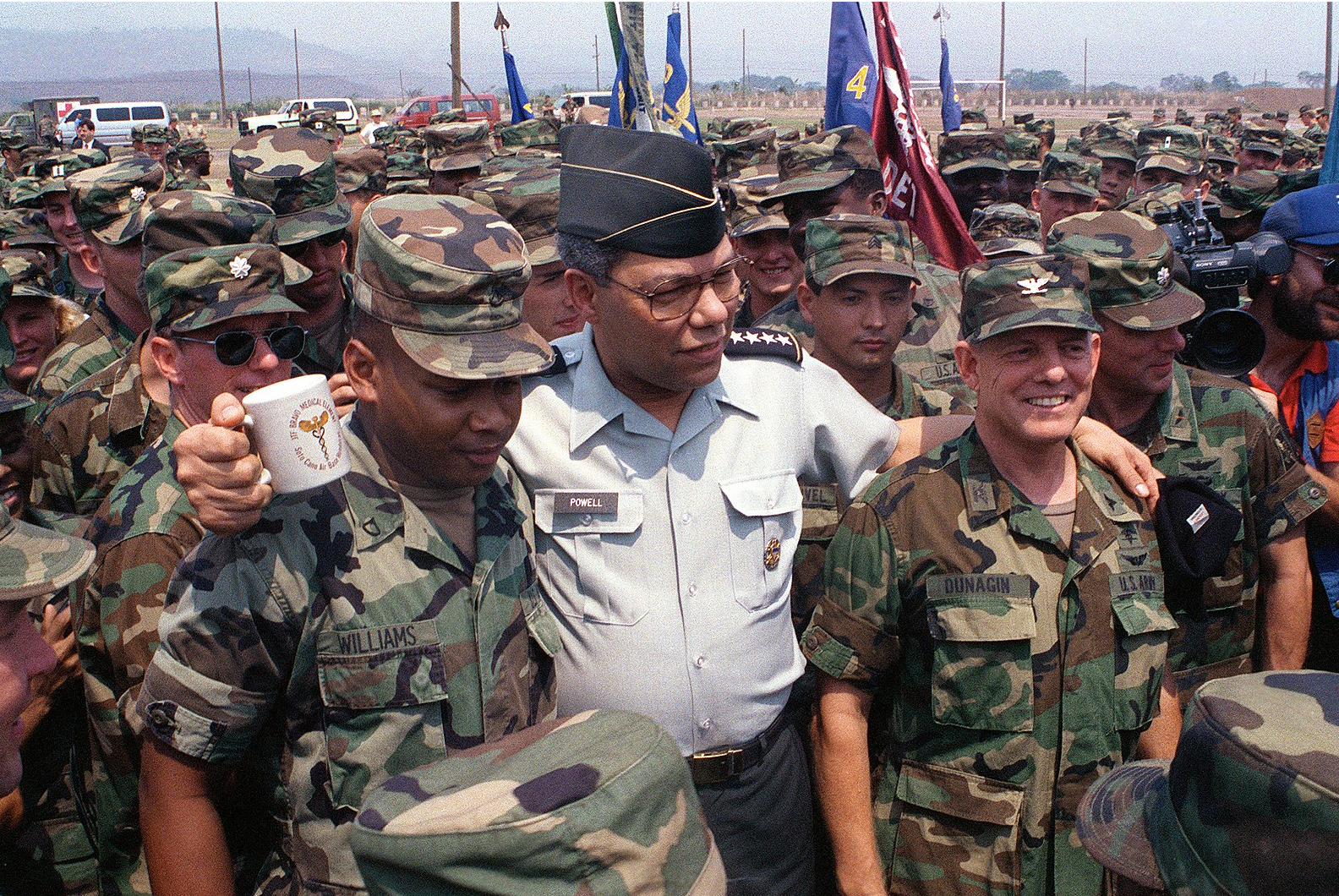 When the news quickly circulated the morning of October 18, 2021, that General Colin Powell had passed away from COVID-19 complications, the whole world gasped. A highly decorated military leader, Powell received the Bronze Star, two Purple Hearts, the Congressional Gold Medal and was awarded the Presidential Medal of Freedom twice; he also broke racial barriers when he became the first Black man to serve as Chairman of the Joint Chiefs of Staff (1898-93) and as U.S. Secretary of State (2001-05).

“Hearing the news that such an icon had passed was tough,” said U.S. Army Sergeant First Class Ulisses Bautista. “He meant so much to the military and especially to service members of color.” Bautista, who is stationed at MacDill Air Force Base in Tampa, Florida, acknowledged that Powell’s mentorship was a source of inspiration to him: “As a minority, I looked up to him and followed his many teachings and leadership principles, which will live on through his legacy. He will be missed.”

Son of immigrants from Jamaica, Powell was born in Harlem in 1937. A proud Jamaican American, he became the embodiment of the American dream—which he discussed in detail in his first memoir, My American Journey—and was a great source of inspiration to countless people across the nation and the world.

To Maxine Reyes, retired combat Veteran of the U.S. Army and Air Force, Colin Powell was like, “that uncle you look up to, even though you have never sat next to him at dinner.” Born in Kingston, Jamaica, Reyes credits her decision to move from enlisted service member in the U.S. Air Force to officer in the U.S. Army to General Powell. “As an ambitious immigrant, the American Dream is something I always looked forward to achieving. I wanted to maximize every opportunity afforded to me, make an impact and inspire others to do the same. General Powell’s accomplishments cemented my determination to achieve all things I dreamed of because he proved that it was possible in the land of opportunities.”

Reyes, who dedicated over 20 years of her life to the US military, says she admired Powell because “he was never afraid to share that he was Jamaican; he spoke highly of his Jamaican roots and, to me, that meant everything. Jamaica is a small island, but we had a big diaspora and seeing somebody as highly respected as General Powell openly declare his pride in his Jamaican roots was empowering to me.”

Reyes, who met Powell twice, recalls the first time she was introduced to him through a mutual friend. “My friend said that he was going to tell Colin about me and, as soon as I heard that name, I thought it must have been just a coincidence, it couldn’t have been the man I thought he was referring to.” But it was. A few days later, Reyes found an autographed photo in her mailbox. The photo was a headshot of General Colin Powell and the note read: “To Maxine, A fellow Jamaican. With thanks and admiration for your service and for seizing the American Dream. Keep on soldiering and singing. Best wishes.”

After the success of his first memoir, Powell released a second memoir, It Worked for Me: In Life and Leadership, where he listed his 13 Rules of Leadership, which inspired countless leaders and entrepreneurs. “My favorite was It Can Be Done,” says Air Force veteran Charlynda Scales, successful entrepreneur and CEO of Mutt’s Sauce. “He led by example and, even after retirement, he blazed trails in every circle he was in.”

1. It ain’t as bad as you think. It will look better in the morning.

“I have always tried to keep my confidence and optimism up, no matter how difficult the situation,” he said..

“I’ve worked hard over the years to make sure that when I get mad, I get over it quickly and never lose control of myself,” Powell shared. “With a few lapses I won’t discuss here, I’ve done reasonably well.”

“Disagree with me, do it with feeling, try to convince me you are right and I am about to go down the wrong path,” he wrote. “You owe that to me; that’s why you are here.”

Powell noted any decision “is not about you or your ego; it is about gathering all the information, analyzing it, and trying to get the right answer.”

“Don’t surround yourself with instant skeptics,” Powell shared. “At the same time, don’t shut out skeptics and colleagues who give you solid counterviews.”

5. Be careful what you choose: You may get it.

“Some bad choices can be corrected,” Powell noted. “Some you’ll be stuck with.”

6. Don’t let adverse facts stand in the way of a good decision.

“This is when you look deep into your own fears, anxiety, and self-confidence. This is where you earn your pay and position,” Powell explained.

“Seek the advice of others, but be aware that people are always around who are full of advice and sure they know how you should decide,” Powell shared. “All too often, your decision affects them and they are pushing you in a direction that’s more in their interest than yours.”

“Let all employees believe they were the ones who did it. They were,” Powell shared.

“In the ‘heat of battle’ — whether military or corporate — kindness, like calmness, reassures followers and holds their confidence,” Powell explained.

“Great leaders inspire every follower at every level to internalize their purpose, and to understand that their purpose goes far beyond the mere details of their job,” Powell advised.

12. Don’t take counsel of your fears or naysayers.

“Fear is a normal human emotion. It is not in itself a killer,” Powell shared. “We can learn to be aware when fear grips us, and can train to operate through and in spite of our fear.”

13. Perpetual optimism is a force multiplier.

“If you believe and have prepared your followers, the follower will believe,” Powell explained.

That, Powell wrote, was one of the greatest lessons he learned from the military — where effective communication alone can be a competitive advantage.