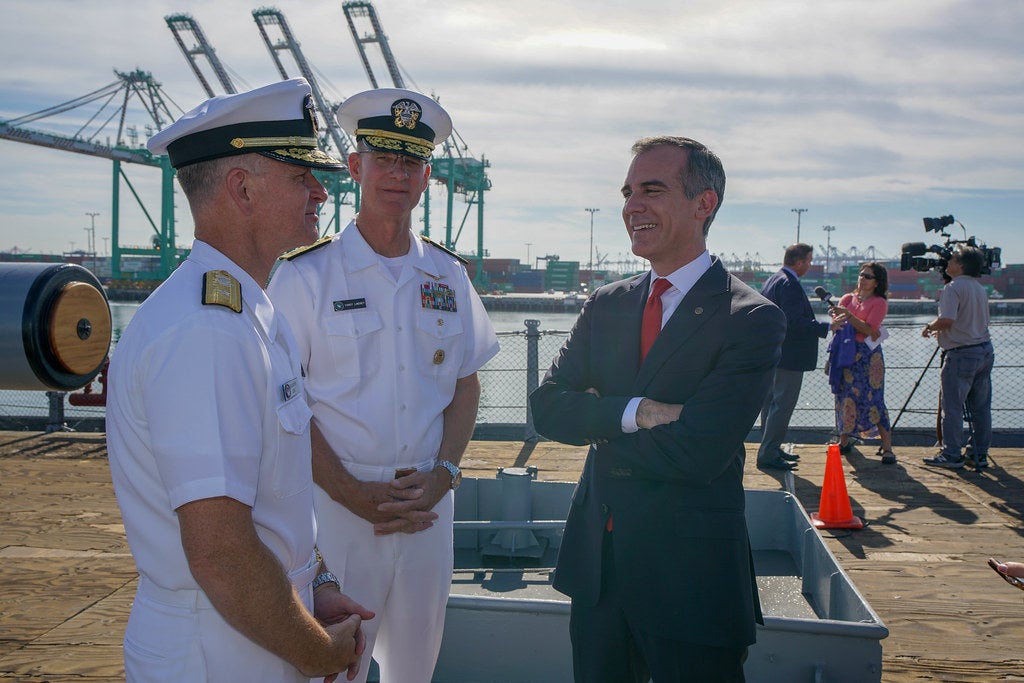 When military members and their families begin contemplating retirement locations after active service, LA doesn’t typically come up as a possibility. But the veteran led leadership of the city is aiming to change that.

Retired Navy Captain Larry Vasquez was originally from New York before becoming a pilot for the Navy. After spending half of his 30 years in service stationed in California, there was nowhere else he wanted to be.

Inspired by the movie Top Gun, Vasquez knew he wanted to be a pilot in the Navy from an early age. He received his commission in 1988 and retired in 2018. “I was the first in my family to graduate from college and next thing you know, I am in Navy flight school. It was hard and a tough couple of years but I was able to qualify to be helicopter pilot,” Vasquez said. He also shared his vivid memories of responding after the terrorist attacks of September 11, 2011 and the impact it had on his life and service going forward.

Vasquez currently serves as the Director of Military and Veteran Affairs within the Los Angeles Mayor’s Office. What sets this office apart is that Mayor Eric Garcetti was an intelligence officer in the United States Navy Reserve. His deputy Mayor is still serving in the Navy Reserves. “This opportunity presented itself but I don’t know if I would be here if my mayor was not a veteran,” Vasquez explained. He was brought onto the team in 2018. “It demonstrates to me that he is committed to veterans…for me this is really about understanding the veteran space and I didn’t know before I got here that we have the largest concentration of veterans in the country.”

In 2013 the mayor created the Office of Veteran Affairs, the first for the city since World War II. The goal of the office is to work collaboratively with other government agencies and organizations in order to strongly advocate for veterans and their needs. “I don’t think I have it all right and I don’t think anyone ever will,” Vasquez shared. But with leadership commitment and an established council of military veterans advising the mayor and his administration, they are on their way to bridging the divide and creating meaningful solutions for veteran related issues.

Since the Mayor has taken office, his administration has been able to house 11,000 homeless veterans. This is done through a range of partnerships and programs aimed to support the veterans in wrap-around care they desperately need for success. By working directly with the VA they were able to coordinate a 14,000 bed housing facility for veterans.

The city and its administration is also committed to tackling issues like employment, where they are working with the Call of Duty Foundation to build on the mayor’s promise to connect 10,000 veterans with employment. They met that goal in 2017 and will aim for 22,000 by the end of the mayor’s term in 2022. With the Super Bowl and Olympics coming to LA, the administration is admanent that veterans benefit from it. “We want to make sure that veterans have a voice, especially veteran-owned small businesses,” Vasquez explained.

For those who are skeptical about California having high ratings from being veteran friendly, they’d be surprised. Irvine was number two in WalletHub’s list of big cities, which is a neighboring city to Los Angeles. High ratings in health care, employment and quality of life were among the reasons for the rating.

When asked what the biggest lesson learned from the military was, Vasquez was quick to answer. “Never quit,” he stated. “One thing the military taught me and the mindset to have is that it is a can’t fail mission…You have to be able to pivot, flex and go to other options.” He went on to explain that a misconception of veterans is that they are rigid, but they couldn’t be more wrong. Vasquez highlighted the fact that veterans are lifelong learners and will always give you 100 percent, all they need is to be valued and have a shared mission.

For veterans looking to settle down and transition out of military service, Los Angeles wants you. The mayor and his administration want your talent, values and commitment to excellence as a citizen and resident of their city. In return, Vasquez and the others on the team remain dedicated to ensuring that the heroes that are ready to come home, have everything they need to do it well.