The history of Rip It, the beverage that fueled US troops in Iraq and beyond - We Are The Mighty

The history of Rip It, the beverage that fueled US troops in Iraq and beyond 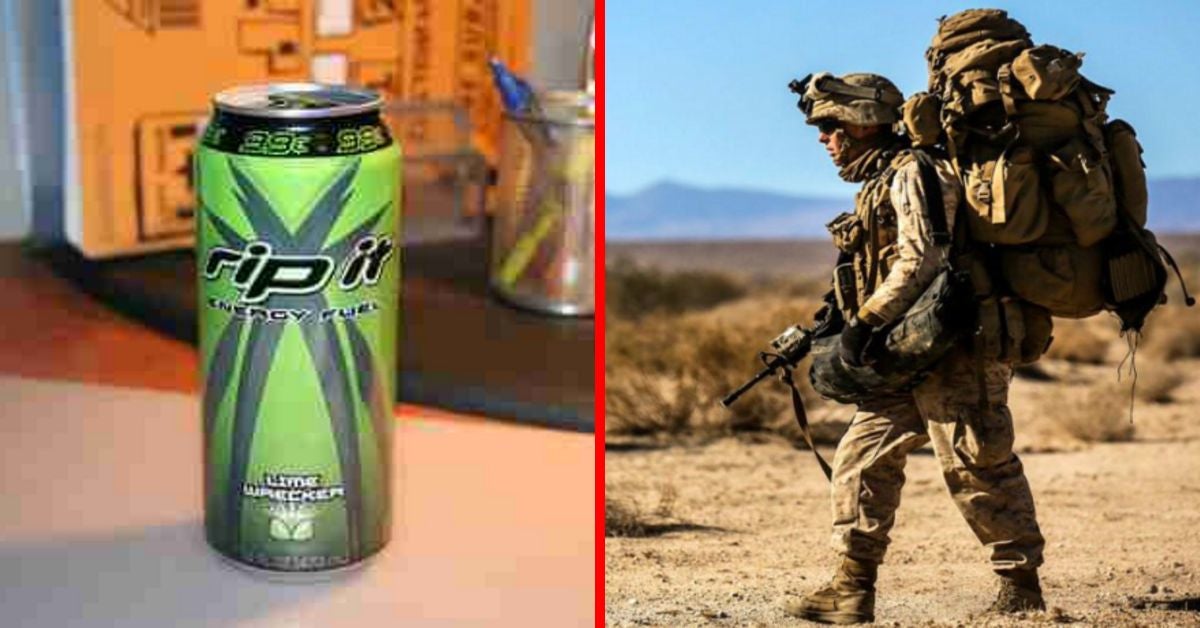 There are a lot of brands out there that try to appeal to the American Armed Forces. They try everything from discounts to events, to prove that they are the number one supporter and brand for the military. Some brands, however, get adopted by American troops, whether they like it or not, and become a staple of the culture, every bit as authentic as creamed chipped beef on toast. No better example of this exists than Rip It.

Rip It is an energy drink that found itself becoming the unofficial fuel of the U.S. military in Iraq, Afghanistan, and beyond. Although the full-sized can wasn’t as widely available, troops could be found stacking the half pint-sized Rip It cans after every meal, ready for whatever came next.

The military provided the small version of the beverage everywhere in the CENTCOM theater for free. It was so common, troops would have “case races,” downing as many as possible in a short amount of time.

Rip It is a product of the National Beverage Corporation, a company whose line of products have been described as everything from “low-cost” to “second tier.” It own brands like Shasta and Faygo and while these don’t have the sparkling reputation of a Coke or Pepsi, these brands are strong on their own.

Adherents to National Beverage brands become die-hards, and whether its unintended or calculated, this kind of cultural adaptation is exactly what a product wants. The company’s La Croix sparkling water set off the ongoing flavored seltzer craze across the country. In the 1990s, fans of the band Insane Clown Posse adopted Faygo as part of their identity. When the company debuted Rip It as part of the explosion of energy drinks in the early 2000s, it wasn’t long before it was approved by the military and then adopted by troops.

In 2004, military contractors began shipping Rip It to Iraq and Afghanistan to support the Global War on Terror. American service members loved the drink, which came free in the eight-ounce can form because it kept them stimulated on long missions. The tiny cans from the chow hall became as important as food and ammunition.

After a while, younger junior enlisted troops began to embrace the brand as if it was an old friend – and it kind of was. Just like a trusted battle buddy poking at you to keep you awake on a watch or on convoy duty, the 160 milligrams or more of caffeine and B vitamins created an energy jolt and awareness that might have been unavailable otherwise.

The only problem was that people soon began to consume more than what was healthy for even a young adult. Some drank as much as 18 small cans per day. Non-commissioned officers would force their troops to stick to a two-can limit, but an NCO can only monitor as much as they see.

So much of the stuff in a short period can create gastrointestinal distress, which ultimately results in terrible “accidents,” even in the course of a mission. Profuse sweating, dehydration, and anxiety made it worse. None of this stopped the popularity or proliferation of the beverage. It’s estimated that at least 99% of those who deployed during the Global War on Terror at least tried a Rip It.

Soon, Rip It was everywhere, as connected with the wars of the Middle East as Pall Mall cigarettes were to World War II. As long as there was an American troop who needed to stay awake, there was a Rip It can somewhere that had their back.