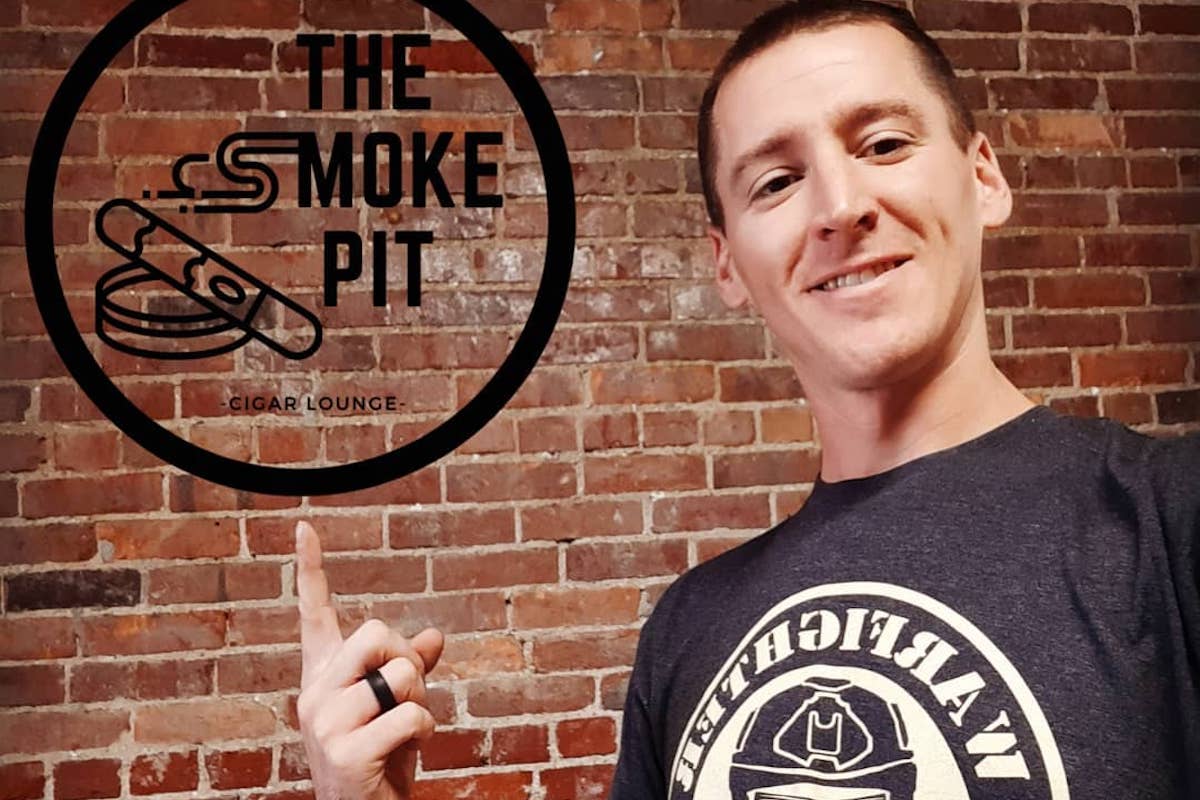 The Smoke Pit recently opened in Old Town Greenwood, Indiana, and invites its guests to come in, relax and revel in some downtime. Especially in the crazy chaos of our current conditions, what more could anyone ask for? There’s a faint smell of spicy tobacco that lingers in the air, and the atmosphere is warm and inviting. Exposed brick walls, original ceiling joists and a general hum in The Smoke Pit make it feel like you’re stepping back into time when you enter the 70-year old downtown building.

And that’s precisely what Marine veteran owner Reid Storvick wants to convey. After serving four years of active duty and four years of reserve duty, Storvick knew that one thing he wanted and needed in his civilian life was a sense of camaraderie – the kind that came from sitting around with a group of his fellow Marines. So he set out to recreate that experience as best he could.

In the corner of this cavernously welcoming spot is a sleek back humidor that offers dozens of varieties of cigars – everything from locally rolled boutique cigars to some of the world’s most exclusive and luxe brands.

Enjoy good conversation and a good cigar, and feel like you have some downtime away from whatever’s troubling you. That’s the goal of The Smoke Pit. Storvick has tried to create a welcoming environment where no one feels like a stranger, and everyone can feel comfortable enough to stay as long as they like. He hopes that the experience will be like nothing else they’ve ever experienced.

For Storvick and his fellow Marines, nothing sounded better on deployment than heading back from the desert than lighting up a cigar and processing the day. In his years abroad, Storvick learned to appreciate cigar culture in a way that surprised him. The ritual of it and the sharing of the experience between him and his fellow Marines led the veteran to want to replicate that experience back home.

Storvick deployed to Afghanistan, Guatemala, and to Honduras, and after returning home from each deployment, he continued to develop his appreciation for cigars, getting deeper and deeper into the hobby. One day, half-joking, he told his wife that he wanted to open a cigar lounge. A few weeks later, his wife presented Storvick with a typed detailed business plan, showing him that not only was it possible, but it might just be pretty darn successful, too.

In an interview with Marine Times, Storvick said it was that moment when he realized it was time to get himself in gear.

Soon, plans started coming together. Storvick and his wife Jessica talked about what they would offer their customers, how they’d set up the lounge, and everything they might need to make the dream into a reality. They knew right off that they wanted to set up shop in Greenwood.

Greenwood holds special significance for Storvick and his family, with both his grandfather and his father being pillars in the community. Once they got the location figured out, Storvick had to decide what kinds of products they would offer.

More than anything, he wanted a wide variety of choices from small boutique lines to more nationally recognized brands. Customers come into The Smoke Pit, select a cigar, and then enjoy it in one of the plush seating areas throughout the space.

Special filters have been installed to make sure the building never gets too smokey, too.

The next step in the evolution of The Smoke Pit is to add alcohol choices to the menu. Storvick has applied for a liquor license, which will help heighten the experience of sitting down to a quality cigar. Ultimately, Storvick’s goal is to help recreate the connections, friendships, and feeling of community he experienced during his deployments. He says when someone new walks into The Smoke Pit, they’re immediately a new friend.