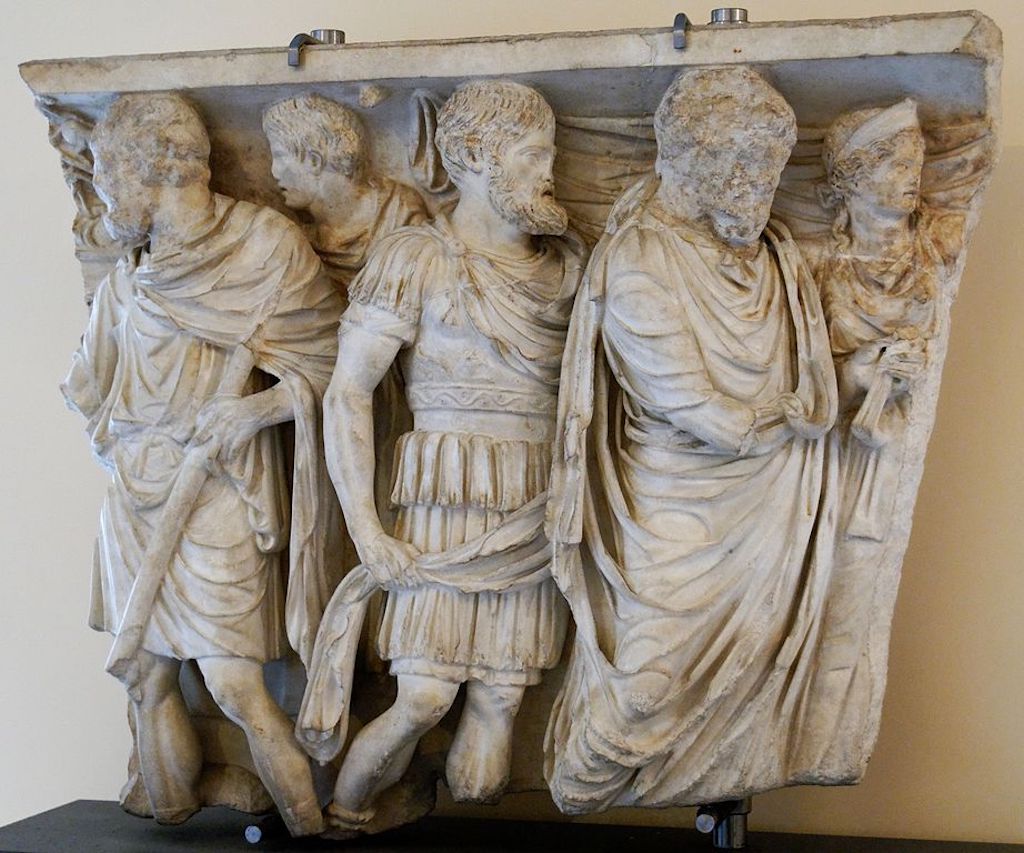 Fragment of a relief from a sarcophagus depicting stages of the deceased's life: religious initiation, military service, and wedding (mid-2nd century AD).

A funeral in the Roman culture was a crucial passage rite that implied the transformation through the phases of life and death. It was imperative to perform the correct ceremonies and funerals to avoid prompting a spiteful spirit ascending from the underworld.

The Romans placed a massive emphasis on funerals to help the deceased pass to the afterlife and demonstrate their social status. At a glance, the Roman funeral consisted of five critical parts: procession, burial and cremation, eulogy, feast, and commemoration.

The funeral of a Roman general was characterized by dancing and a thundering noise produced by the procession. Since the general was a prominent person in the society, the funeral procession would include musicians and mimes.

Additionally, professional mourners took a considerable share of the financing as they were not the deceased’s family members and had to be paid to take part. They would scream, pull out hair, and score their faces to express their grief.

Clients of the deceased, also referred to as freedmen, demonstrated their respect to their patron. Performers with traditional masks would dress like the deceased’s ancestors and replicate their personalities. Afterward, the dead body would be transported in a bier where the family followed, bringing the procession to an end.

The body was delivered to the “city of the dead,” also known as a necropolis, and placed in a funeral pyre. The body was then burned there, and the ashes, teeth, and bone fragments were kept in a funerary urn. There was a strong belief that the spirit had not made its way to River Styx before the body was laid to rest.

There also was a sense that the deceased’s soul still stuck around the family and friends. While cremation was the norm for the funeral process, inhumation ultimately became preferred. The body would be laid in a coffin called the sarcophagus, frequently decorated hugely and richly, and had a lifelike painting of the deceased on the front.

Since the deceased was a Roman general and a significant person in society, he made a substantial impression on their family.

The family would give a eulogy at the general’s funeral, talking about the Roman general’s significant achievements in his life, what kind of person he was, and the contribution he brought to Roman society.

Unsurprisingly, numerous eulogies delivered at the Roman funerals have survived to this date.

There was no funeral of a Roman general that was not characterized by a feast at its end. The funeral feast was the last marker that signified how the deceased would proceed to the underworld. It also gave the family the consolation to move on.

After the body was cremated or buried, some practices were carried out to commemorate the deceased. The Roman state honored this by setting aside specific days annually to remember their loved ones, not forgetting the Parentalia held from February 13 to the 21. This was primarily meant to honor the ancestors of the family.

At the same time, individual families had their days commemorating their dead. It was speculated that if the deceased’s family assembled around their grave and presented an offering, their presence would arouse and appease the spirit.

Consequently, the spirit would recall some of its life details instead of floating around the underworld with barely any memory of its previous life.