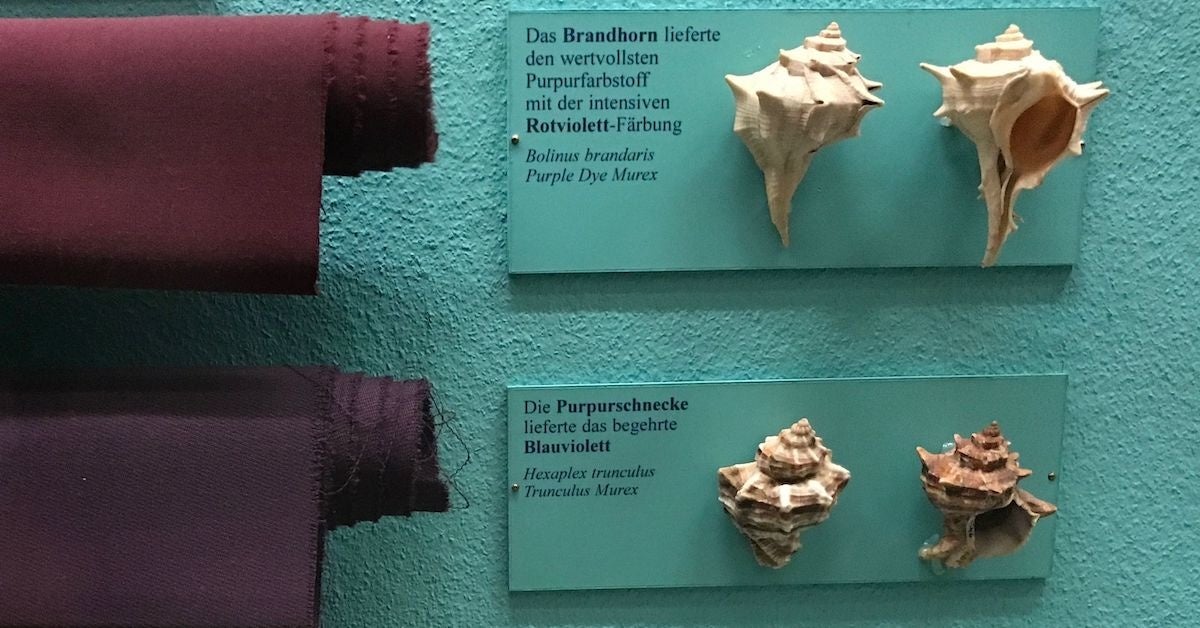 Purple, which is best known as Tyrian Purple, is a unique dye drawn from the murex shellfish, initially manufactured by the Phoenician city of Tyre. The difficulty of manufacturing the dye, striking purple to the red color range, and its maximum resistance to fading made items dyed in Tyrian purple extremely desirable and costly. Extracting this dye, also known as imperial purple, Phoenician purple, or royal purple, involved a mammoth of snails coupled with extensive labor.

Phoenicians earned considerable fame as sellers of the Tyrian purple and exported its manufacture to its colonies, especially Carthage. From here, its popularity significantly spread and was consequently adopted by the Romans, who used it to signify imperial status and authority.

According to Phoenician mythology, the discovery of Tyrian purple was attributed to the Tyros, whose pet dog was stained in a purple color after biting on a mollusk that was washed up. Tyros requested a garment of the same color and then started the famous dyeing industry.

At a glance, each Murex Brandaris snail encompasses a single drop of the precious liquid. As such, it took at least two hundred and fifty thousand shellfish to generate one fluid ounce of the purple dye. The need to collate thousands of these creatures made the purple color incredibly priceless in ancient Rome.

Thousands of Romans gathered marine snails from manufacturing the Tyrian purple on a large scale, which were immediately boiled in huge lead vats for many days. Despite the foul odor produced, the artisans harvested chemical precursors from the snails through light and heat and transformed them into unique and treasured dyes.

The primary purpose of the Tyrian purple was to dye textiles, especially the most refined quality cloth called the Dibapha, which was meant to be dipped twice into the purple dye. Owing to the time-consuming production procedure, the large number of shells needed, and the striking color range of finished articles, these dyed textiles were a large luxury piece.

Therefore, the Tyrian purple became a giant status symbol signifying wealth, power, and prestige. Roman emperors prohibited their citizens from wearing purple clothing, and if they did, they would face the death penalty. Purple was a distinct way of showing wealth and distinguishing the upper class in a more stratified way than gold did. Clothes made from the purple dye were exorbitantly expensive such that a single pound of purple wool was more expensive than a pound of gold, and a pound of the purple dye was equivalent to three pounds of gold.

At the same time, the uniqueness and value of the purple dye were attributed to its property that, instead of fading with time, increased brightness with each washing circle. The Romans adopted imperial purple since the upper-ranking magistrates were dressed in toga praetexta, a white toga with a distinct purple stripe. When the Roman generals celebrated a Roman triumph, the most significant distinction a general could get, they were permitted to put on the unique purple Toga Picta.

Afterward, purple got associated with the emperor and his assistants. In the following centuries, the Roman government would go to extraordinary lengths to nationalize purple color production and set aside the unique dye for the emperor. In the Eastern Roman Empire, purple was reserved as the emperor’s possession. Additionally, it was also utilized for the most crucial imperial documents. Overall, a drop of purple on an individual’s clothes was a unique mark to distinguish one as an imperial administrator or a bishop.