Honoring the ‘Chosin Few’ reunion in 2022 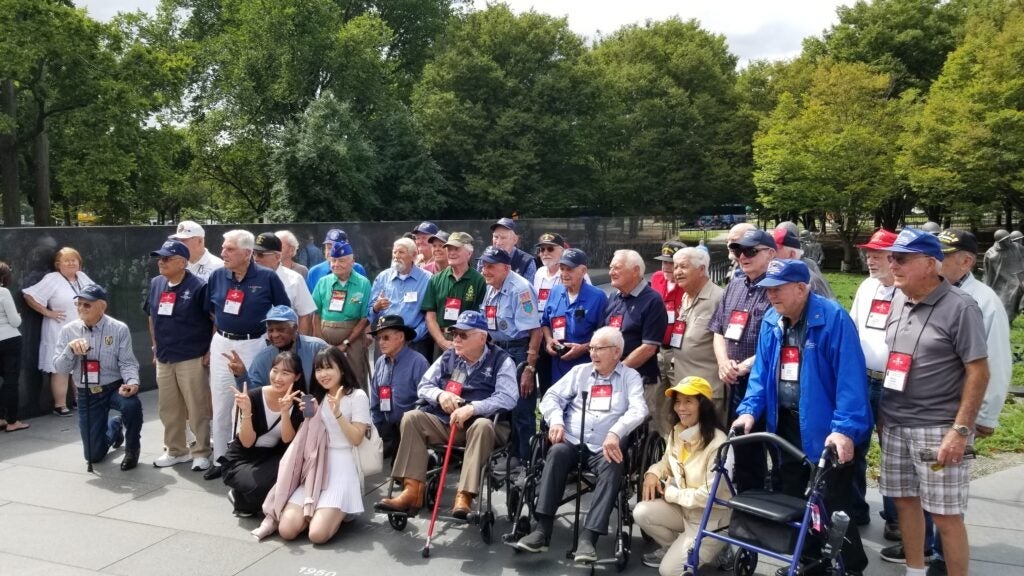 Surviving veterans of the Battle of the Chosin Reservoir at the Korean War Memorial on September 10, 2022, in Washington D.C. Photo courtesy of Joel Searls.

The Korean War is a significant part of American and World history that is finally starting to get the attention it deserves in recent years. Col. Warren Wiedhan, USMC (ret.) invited WATM to the Chosin Few Reunion from September 7-September 11 in Washington, D.C. It was an honor to attend and a great event filled with Marine Corps veterans from the Battle of the Chosin Reservoir. The Marines present are of the generation of veterans from the Forgotten War and those who placed great sacrifice upon the altar of freedom, which must be honored. COVID-19 kept any prior events from taking place, so it was excellent to attend and meet so many heroes who survived the icy cold combat of Chosin. Col. Wiedhahn hosted a well-thought-out, planned and noble sequence of events for the reunion.

Col. Wiedhahn joined the Marines in 1948 on an enlistment. Post-boot camp he served in China until 1949 when the country fell to communists. He served in the Korean War and participated in the Pusan Perimeter, the Inchon Landing, the Liberation of Seoul and the Chosin Reservoir and was awarded the Purple Heart for his wounds received during the war. Wiedhahn was then commissioned in 1953 and served 33 years in the Corps. His service included combat in Vietnam from 1968-1969 with the 3rd Battalion, 9th Marines and he was awarded the Silver Star and Legion of Merit with a “V” for heroic actions during Operation Dewey Canyon. He later commanded both the 4th and 9th Marine Regiments.

The Chosin Few Reunion began with a meet and greet for our initial day, which allowed us to get to know those in attendance for the ceremony. We had a dinner provided to us by the 29 Diner at the Crystal City Hilton, which is where the majority of events were held for the reunion. Our first major trip was to the National Museum of the Marine Corps and we were hosted at the museum by Major General James Lukeman, USMC (ret.) in the theater with the colors presented by Marines and a video welcome by Mrs. Ellen Gordon, CEO of the Tootsie Roll Industries (Tootsie rolls played a significant role in Korea), which all were excellent. More on that later. The Marine Veterans of Chosin in attendance were honored as well with an exuberant ovation from the friends, families and supporters gathered. Those who could stand did so with pride.

The Tootsie Roll story for the Korean War, especially the Chosin Reservoir begins with the Marines being in frozen temperatures and low on mortar rounds radioed for support. The code word for mortar rounds was “Tootsie Roll” which is what they requested. Pallets of what were thought to be mortar rounds were air-dropped and arrived, however, they were filled with the Tootsie Roll candies and no mortar rounds! The Marines made quick use of the candies, not just for sustenance, but when the candy was softened up, it could be applied to broken equipment and pipes, especially cracked fuel lines, for a quick fix. They used these fixes to maneuver away from the Chinese and toward safety, so the Tootsie Rolls appeared to be a sugary-filled lifesaver. Eat your heart out MacGyver. A gift from Tootsie Roll came in the mail post the reunion and two pictures of the items they sent are below.

We were next treated to a tour of the museum, which was my opportunity to revisit the Korean War exhibit, especially the Chosin Reservoir portion which is cooled to an icy temperature to provide a small effect of what life was like for the Marines at the battle. The museum and its employees have done an excellent job in creating the exhibit and bringing as much life-like realism as possible to it. The museum is definitely engaging and worth a visit. They even have items from LtGen Lewis B. “Chesty” Puller as well.

Our next stop on the day’s events involved lunch with fellow veterans and their families, which was interesting and pleasant. It was great and fun to hear many of their stories and the opportunity to meet with fellow esteemed veterans such as Senator Jim Webb and Admiral William H. McRaven. We then enjoyed a screening of Devotion, which is based on the book of the same name about the life of the first African American Naval Aviator Jesse L. Brown and his service in the Korean War which includes his support of Marines in battle at Chosin Reservoir. The film comes out November 23, 2022, and is financed by decorated Marine Corps Vietnam veteran and founder of FedEx, Frederick W. Smith, who was in attendance at the screening as well. Many of the Korean War veterans were deeply touched by the film and appreciated the screening.

We boarded our buses back to the hotel for our afternoon catch-up and then our dinner. Our next day involved even more interesting VIP guests and speakers such as Dr. Charlie Neimeyer, a retired Marine Lieutenant Colonel, who spoke about the Battle of the Chosin Reservoir with a question and answer session. He offered insights into the monumental challenges that the Marines faced going into the Korean War, the battles and hardships and lessons learned for future engagements. We then completed our lunch and headed to the buses for us to visit the Korean War Memorial. The trip to the memorial was highly memorable and touching, especially with the group of Marine veterans gathering with their loved ones and then doing a group photo which rounded out the trip. A few ladies from South Korea posed in the photo as well and offered their appreciation for the veterans’ service in the war.

We then moved back to the hotel for our big dinner in the evening. The live band, which was reminiscent of a Glenn Miller concert, made the ambiance of the event and the food was exquisite. The fellow Marine veterans at my table made the evening fun, enjoyable and interesting. One of the guests at my table was Fred Lash, a Marine Corps combat veteran from the Vietnam War and later public affairs officer in the Corps. He shared a lot of his insights into the Corps and his providing military-technical consultation on The Great Santini, which is a film that stars Robert Duvall as a Marine Corps pilot. The VIP list for our day’s functions included General David Berger, Commandant of the Marines Corps, Michelle Kang, head of Cognosante and Andrew Choe, CEO of Starkist. A special thanks to Frederick W. Smith and Michelle Kang’s sponsorship of the event.

The Chosin Few acknowledge many organizations in their program, which seemed important to mention here too. They include FedEx, Cognosante, Costco, Starkist, Tootsie Roll Industries, the 29 Diner, Radio City Orchestra, Armed Forces Reunions, The Original Great Plate, Ka-Bar and Military Historical Tours. It was a memorable event that I’m grateful to have attended and offer my heartfelt appreciation to the veterans of the Chosin Reservoir and to their families. Semper Fi!