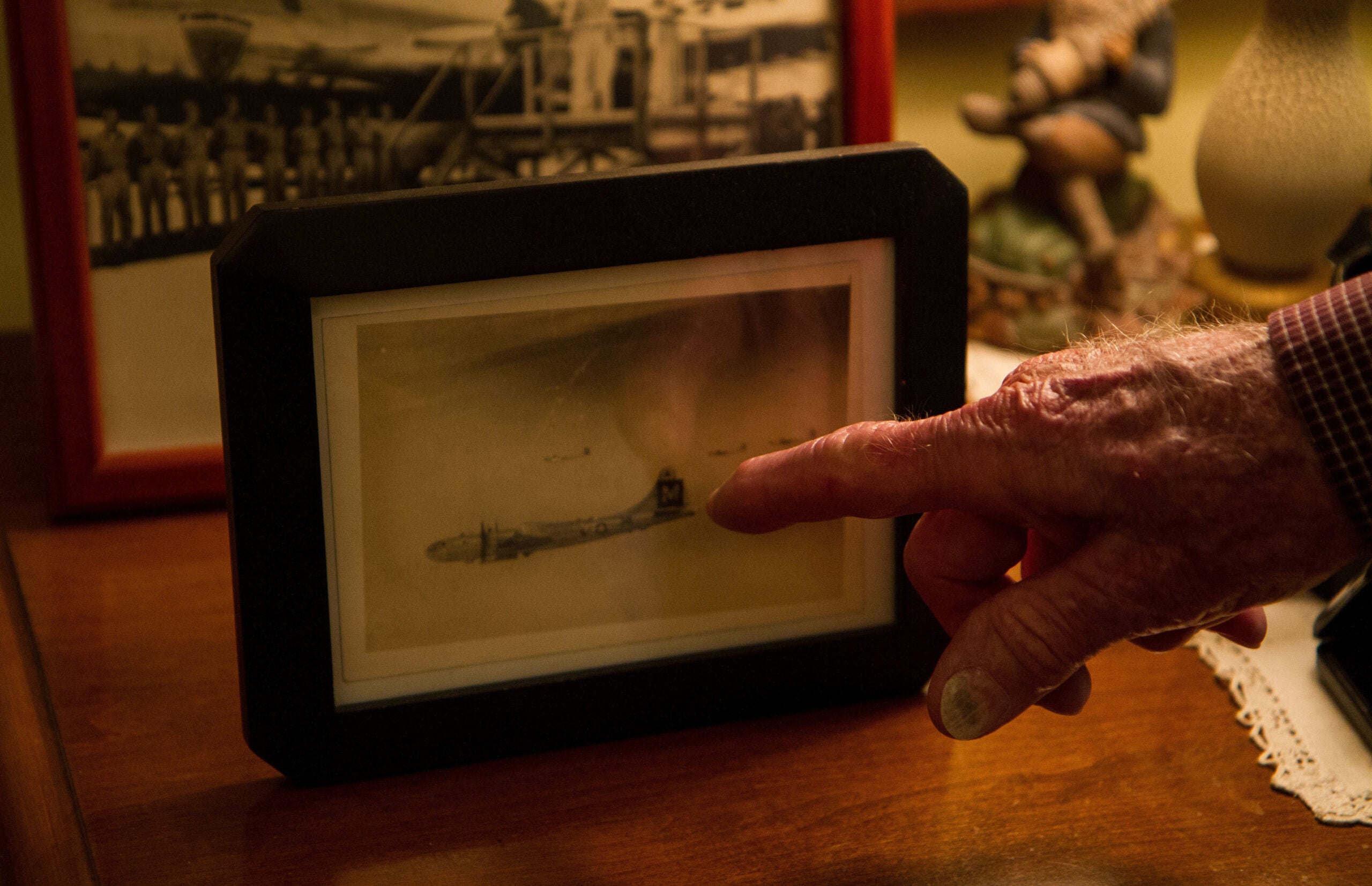 Rishi Sharma is the founder of the Remember WWII non-profit dedicated to preserving the memory and experiences of World War II veterans. His work has been features on BBC Breakfast, CNN, CBS News with Scott Pelley, Associated Press, Fox and Friends, and the History channel. Remember WWII has amassed a collection of over 1,600 interviews with many more to go. Every day is a race against the clock because everyday about 240 veterans pass away, their voices and stories lost to the sands of time. Remember WWII needs all-hands-on-deck to capture the testimonies of all remaining WWII veterans.

WATM: On the remember WWII website it states that you started this journey at 18. How did you know at such a young age that this was your calling?

I’m from Southern California and I started interviewing veterans in high school when I was 16. I used to go to the local retirement home to interview veterans. I’ve always been interested in World War II. I think for many young boys the World War II veterans are perfect examples of what it means to be a real man, you could say. Right? Who is doing the right thing, putting your life on the line to help others and, so, I would be attracted to that kind of mentality. I wanted to meet my heroes and so I just went to the local retirement home and started interviewing them.

I just really enjoyed it and I kept doing it and eventually the local paper in my town ran a story. People started contacting me to interview their dad or their grandpa and I started making appointments. I would ride my bike to these different houses and by the time I started driving I was still doing the interviews. I would ditch class to do interviews because I was learning more from the veterans than I was in school. You know you could ask them about the past 120 years and you’ll get a first hand answer as a response. You know nothing beats that eyewitness testimonies and so I just kept doing it.

When I graduated I knew this is what I wanted to do and so I had to figure out how. I just reached out to some news organizations. Eventually, Associated Press ran the story about my mission and when they did, CBS Sunday morning picked it up and I was able to raise funding — this is in December 2016. I would be able to raise funding on a gofundme and I just hit the road. Over the last five years I’ve been driving across US and Canada, the UK, and Australia interviewing World War II combat veterans. [It’s] just me, there’s a couple other people who volunteer interviews and we have a couple people who put the editing. All the videos on the channel except, maybe two, are edited by me and all the interviews are done by me except one on the channel. It’s just everyday interviewing World War II veterans.

WATM: How did you feel about conducting your first interview compared to your most recent one?

You learn a lot. You know, I’m not a veteran and so I’ve been total civilian. My connection to the military is through, you know, Saving Private Ryan or Band of Brothers. So, when you first meet the veterans, at least in my case, I kept trying to compare with what they were saying to what I see in the movie or on TV shows and it’s so different. The reality versus what they portray in Hollywood — it took awhile for me to get rid of that kind of Hollywood [portrayal]. You know the ‘man-died-because-of-bullet-pierced-his-heart-having-him-calling-out-for-his-mother’ you know, that kind of BS. So, I stayed away from watching war films after I started doing the interviews. I stayed away from movies and TV shows. I didn’t want to taint what the veterans were saying and if you interview enough of them you get an idea of what it what it was like.

So many of them have similar stories; they all grew up in the Great Depression, either they went into the service before or after Pearl Harbor, you know and that was a big moment in their lives; how they heard about the attack and how it transformed the country, and then they talk about their training. You know in the Marines you had to go boot camp, the Army had basic training and in the Air Force. [It] was part of the Army at that time, and so you know they they go through their training. Then on how they got overseas and they talk in detail about what it was like.

I’m there to help them tell their story. They can tell their stories very well, they just need someone to give them some leading questions like, ‘How did you get into the service?’ ‘Take me through your first day in combat,’ that kind of stuff. Sometimes you could ask questions of things that will just bring back a memory instantly, you know, like, ‘Did you have any experiences with tanks?’ just the hearing that word ‘tank’ is gonna trigger some memory that they may have not brought up otherwise. So, that kind of stuff you just learn overtime.

I was not a historian when I started out. I just knew enough more than the average person about World War Two, I guess to be cocky, but really you know I didn’t know anything. It’s amazing how much I’ve learned about the war because I focus on all the different countries. I’ve to these other places you get so many different perspectives and it really helps paint the picture.

The goal is to have the veterans say as much of their story and their words and so you know there’s a lot to learn not just about interviewing World War II veterans, about interviewing. You know like fridges make a lot of noise, AC units make noise, you know. I’m the cameraman as well, obviously, so you know you can be aware of all these things or how to deal with you know other people distracting or how to get the veterans to be comfortable talking about the hardest days of their life. There’s so many things that go into just being an interviewer that is just something that you learn over time. I’m definitely not the world’s best interviewer but I would argue that I’m one of the only people that can actually get a World War II veteran to talk about frontline combat. I think that’s everything on the channel, the kind of graphic stories they share. I’ve never seen anywhere else.

WATM: The Remember WWII website has an interview guide if someone wanted to conduct an WWII interview themselves. Could you expand a little bit more on that?

I created that to try to get people an idea if they come across a World War II veteran, if there’s someone in their family, you know, it’s a how-to so they can do the interview. It’s kind of similar to what I do. I find it funny that I made the guide and I don’t ask all those questions because it doesn’t make sense to spend like two hours talking about training. You know some of those really detailed stuff but the guide is there for anyone who doesn’t know a bunch about World War II. If they don’t know anything about World War II and they just read that guide, [with] the questions [they will] still do a great interview because the veterans know what to say. They just need the prompt.

There is such a disconnect now [because] we have within 1 or 1/2 a percent [of the population] is in the military or connected to the military. I know this ’cause I was one of them. It took me forever to learn the ranks: private to PFC to lance corporal to corporal then sergeant, staff sergeant. You learn about being a commissioned officer — all that.

The average American civilian doesn’t know the difference between a regiment and division. That kind of stuff. That’s why I made that guide because someone who doesn’t need to go into any of that, they just need to read the questions.

The goal of Remember WWII is to get as many World War II veterans on camera and of the allied countries. That’s the goal because we don’t want our history erased, we don’t want it to be forgotten, and we need to make sure that the men who they served with, who were killed in the war, their stories need to be told. You know each interview the veterans will bring up the people who were killed, men who they serve with. To my generation they’re just names, for that generation it was a whole person who had a whole life the head of them that was taken away in the war.

WATM: So, when somebody is interviewing a veteran following your guide, correct, do you accept the footage if they were to send you that material or is that to guide them on their own independent projects?

That’s a great question. Both, I mean, there’s no money involved in this, I don’t take a salary. I literally live out of the car in order to afford the interviews. We had funding when I first started out. That takes money obviously I’ve use the money what it was for. I mean people don’t give me that money to have a nest egg for myself. They gave it to me to go get veterans on camera. We don’t have funding. That’s something I’m trying to figure out the current moment. Brainstorming how get cash, to get more veterans on camera, but you know for me it’s not about owning the footage. I give the veterans copies of it — I mean it’s really for them. We give [copies] to schools and universities. People are welcome to do the interview and send it to us and if it’s good enough quality will put it on the channel but the goal was really just to get people to do it.

WATM: How can people help Remember WWII achieve its mission?

You know, we have all the time in the world to figure out what to do with the footage after, you know, but it’s just so important that people just get off their butts and go to the local retirement home or go to the legion or just to the veterans that are out there. All it takes is someone to spend half a day and there’s no excuse [because] we have the technology — everyone has the camera on their phone. [America] has the means and the transportation. It’s never been easier to document an entire generation.