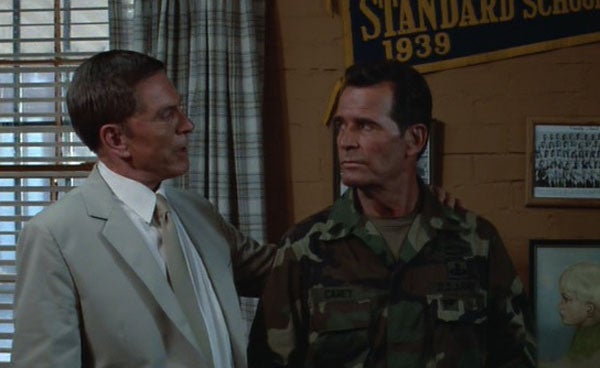 Army Pvt. James S. Bumgarner met a North Korean patrol during the evening of April 23, 1951, during the early stages of the Korean War. You probably know him better as actor James Garner, star of The Rockford Files, Maverick, and The Great Escape, among many others. But before his Hollywood career took off, he enlisted in the U.S. Merchant Marine at the end of World War II, then into the California National Guard before deploying to Korea for 14 months with the 5th Regimental Combat Team.

Army chow was bearable as long as I could keep the onions and garlic out of it. I cannot stand onions and I’m very sensitive to garlic. I can taste tiny amounts of it, like when they’ve cooked another dish with garlic before and don’t wash the pan. If I get even a hint of it, I might throw up in my plate. This violent aversion may have saved my life: like our South Korean allies, the Chinese and North Korean troops lived on a diet of fish heads, rice, and garlic.

One night while on guard on the line, I caught a faint whiff of it coming from the direction of the enemy positions. I couldn’t see anything, but I knew there was someone out there and they were coming closer. Once I sniffed them I could hear them, too. It turned out to be a patrol heading straight for our position. They were just the other side of a rise when I passed the word down the line. We were ready for them and stopped them in their tracks.

He was wounded in that exchange and received his first Purple Heart. 32 years after the war, Garner received another Purple Heart for being wounded during a friendly fire incident where a strafing fighter hit him in the buttocks. The Army mixed up the paperwork and only found it after the actor mentioned the incident on Good Morning America

“I got it in the backside. I went into a foxhole headfirst and I was a little late. There’s a lot of room for error with a wound in the rear. It’s a wide target.”

During his long career as an actor, Garner played a number of military roles, including an American airman in the WWII-era British Eagles Squadron, an Army Tanker, and Army infantryman.

“After 32 years, it’s better to receive this now than posthumously,” Garner said at his ceremony. “It is indeed an honor and I tried to serve my country to the best of my ability.”