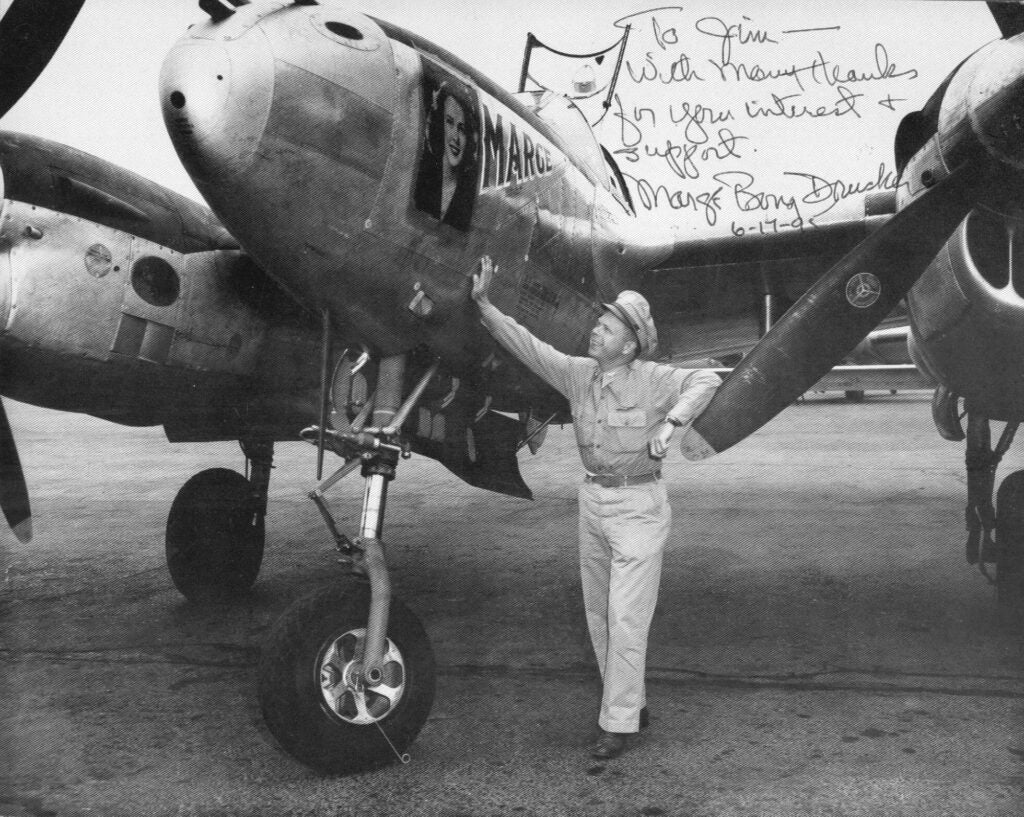 Major Richard Ira Bong is also known as the Ace of Aces for his claim to fame as America’s highest-scoring flying ace. He is credited with 40 confirmed aerial kills during WWII, all in the P-38 Lightning fighter plane. For his impressive service, Bong was awarded the Medal of Honor by Gen. Douglas MacArthur in December 1944. Although it didn’t count toward his aerial kills, Bong is also credited with a crocodile kill in his P-38.

Bong was born in 1920 in the small town of Poplar, Wisconsin. With eight siblings, he worked on the family farm where he learned how to operate and maintain farm equipment. During his childhood, Bong also developed an interest in aviation. Combined with his mechanical prowess, Bong was destined to become an aviator.

He started college in 1938 and enrolled in the Civilian Aeronautics Authority, through which he earned his pilot’s license. In February 1941, Bong applied for the Army Air Corps Aviation Cadet Program. After demonstrating his flying ability, he formally entered service in May.

Bong’s flying career was accelerated by the Japanese surprise attack on Pearl Harbor and America’s entry into WWII. In January 1942, he was commissioned as a 2nd Lt. into the Army Air Force Reserves. Because of his established flying skill and aerial marksmanship, Bong served as an instructor at Luke Field, Arizona before transferring to Hamilton Field near San Francisco, California. There, Bong performed aerial antics and stunts in his P-38. Although he was reprimanded for flying a loop around the Golden Gate Bridge, Bong’s skill caught the attention of Gen. George C. Kenney.

Kenney selected Bong to serve as a combat pilot in the Fifth Air Force under his command. By September 1942, Bong was on his way to the war in the Pacific. In his P-38, Bong racked up kill after kill against Japanese planes. His victories earned him a strong reputation amongst his fellow pilots and commanding officers. By November 1943, Bong’s combat performance resulted in both the Silver Star and the Distinguished Flying Cross. He credited his success in aerial combat to his preferred tactic of closing as closely as possible with the enemy to avoid missing.

Bong’s strategy of close combat served him particularly well during a rescue mission in Papua New Guinea. Three fellow pilots were crossing a lake to rescue another pilot who had been missing in the jungle. While flying overhead cover, Bong noticed a crocodile following the boat closely in the water. Charged with protecting his comrades, Bong dove low and glided over the water. With a precise burst of 20mm cannonfire, Bong blasted the croc. Newspapers reported on the incredible tale, though the crocodile was erroneously called a gator.

By Fall 1944, Bong’s official aerial victory tally reached 40, making him the top American ace of all time. He was awarded the Medal of Honor and returned to America in January 1945 to a hero’s welcome. With his celebrity status, Bong married his sweetheart, Marjorie Vattendahl, and moved to California to serve as a test pilot for the Lockheed Aircraft Corporation. His fateful assignment with Lockheed was to develop America’s first combat-ready fighter jet, the P-80 Shooting Star.

On August 6, 1945, Bong took off in the P-80 at 2:30pm. However, the plane suffered a mechanical problem and Bong attempted to eject. Tragically, the plane exploded before he could escape and Bong was killed in the flames before the aircraft crashed. Bong’s untimely death was major news. Although the bombing of Hiroshima occurred the same day, many papers placed the headline of his accident just below that of the atom bomb; a testament to his national fame. While the Richard I. Bong Air Force Base in Wisconsin was never completed, other Air Force bases from Japan to Alaska and Texas pay him homage with streets named after America’s Ace of Aces.