Franklin Delano Roosevelt Memorial facts - We Are The Mighty

Everything you didn’t know about the Franklin Delano Roosevelt Memorial 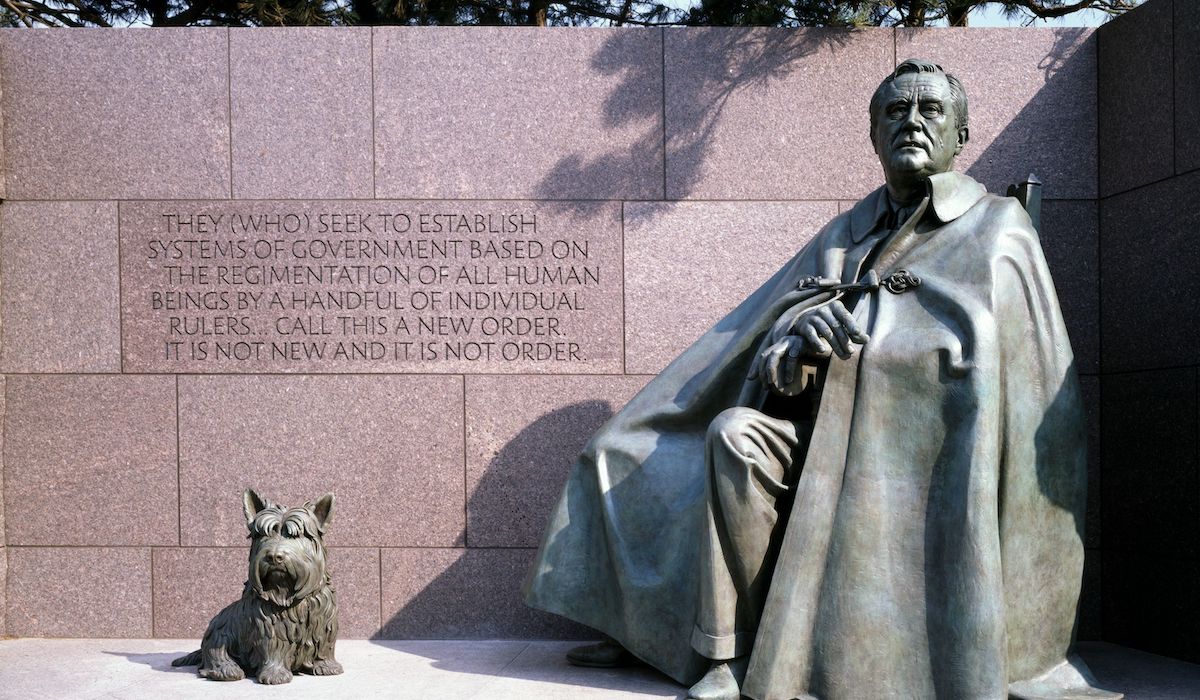 One of the most overlooked monuments at the National Mall, the Franklin Delano Roosevelt Memorial is located in West Potomac Park between the Tidal Basin along the Cherry Tree Walk and the Potomac River in Washington, D.C. The memorial dedicated to America’s 32nd president is about halfway between the Lincoln Memorial and the Thomas Jefferson Memorial.

President Roosevelt led the nation during both the Great Depression and WWII during his four terms as president. The sprawling memorial is designed to guide visitors through a walk back through each of those terms. There are more than seven acres of space to explore the FDR Memorial. Each feature at the site is designed to help a visitor understand more about this dynamic president and how he directly impacted modern-day America.

The memorial was dedicated on May 2, 1997, by President Bill Clinton.

There are sculptures at the memorial inspired by photographs of FDR seated alongside his dog Fala. There are also scenes from the Great Depression, ranging from bread lines to people gathered at a radio to listen to FDR’s Fireside Chats. A bronze statue of First Lady Eleanor Roosevelt standing in front of the United Nations emblem honors her dedication to the UN and global causes. FDR’s memorial is the only one at the national mall which depicts a First Lady.

Everything you didn’t know about the Franklin Delano Roosevelt Memorial

The memorial was designed and developed by Lawrence Halprin. He called this his crowning achievement because of the difficulty in creating the monument and because of Halprin’s fond memories of listening to Roosevelt’s Fireside Chats.

Halprin won a design competition to create the memorial back in 1974, but Congress didn’t appropriate funds for more than 20 years. The final design features Halprin’s work and ideas and several other prominent architects and designers, including Leonard Baskin, Robert Graham, Thomas Hardy, George Segal, and Neil Eastern.

Running water is an important metaphor that’s carried throughout the memorial. Each of the four rooms contains a waterfall, and as visitors move from one place to the next, the waterfalls become larger and more complex. This is meant to reflect the complexity of the presidency.

The five main water features all represent something specific.

The single large drop of water represents the economy’s crash, which led the country to the Great Depression.

Stair-stepped water features are meant to pay homage to the Tennessee Valley Authority dam-building project, which was the first of its kind in the country.

There are also several chaotic waterfalls at sharp angles, all that signify WWII.

The array of combining waterfalls is intended to be a retrospective of Roosevelt’s presidency.

The Franklin Delano Roosevelt Memorial is designed to give people options on how they experience it, allowing them to reverse directions, experience different sites, smells, and sounds, pause and reflect, and even be alone. All of these options are meant to indicate some of what Roosevelt did as president.

Because of Roosevelt’s disability, the memorial designers wanted to create an experience that would be accessible to all. The memorial includes an area written in braille for people who are blind, and the wide pathways are accessible for those who use wheelchairs.

However, disability advocates say that the braille is incorrectly spaced and positioned at eight feet, too high for anyone to actually read.

One of the statues of FDR also stirred controversy. Initial designs planned to showcase FDR in his wheelchair, but the final design depicts the president in his chair with a cloak obscuring the wheelchair. This is often how he maneuvered throughout his day, even though his reliance on a wheelchair wasn’t widely publicized during his lifetime. Historians and disability rights activities wanted the wheelchair to be shown since they believe it depicts his source of strength. Finally, the sculptor decided to add casters to the back of the chair to create a symbolic wheelchair. However, the casters are only visible behind the statue.

In 2001, an additional statue was placed at the memorial entrance that shows FDR seated in a wheelchair.

This is actually the second Franklin Delano Roosevelt Memorial

In a conversation with friend and Supreme Court Associate Justice Felix Frankfurter in 1941, Roosevelt said if he were ever to have a monument erected in his honor, it should go in front of the National Archives and be no later than his desk. Roosevelt said he wanted the memorial to be simple, without any ornamentation.

In 1965, a 3-foot tall, 7-foot long, and 4-foot wide white marble block was dedicated to Roosevelt. This memorial was placed near the southeast corner of Ninth Street NW and Pennsylvania Avenue NW. The simple stone reads, “In Memory of Franklin Delano Roosevelt,” just like the president wanted.