This might be the most important moment in Marine aviation 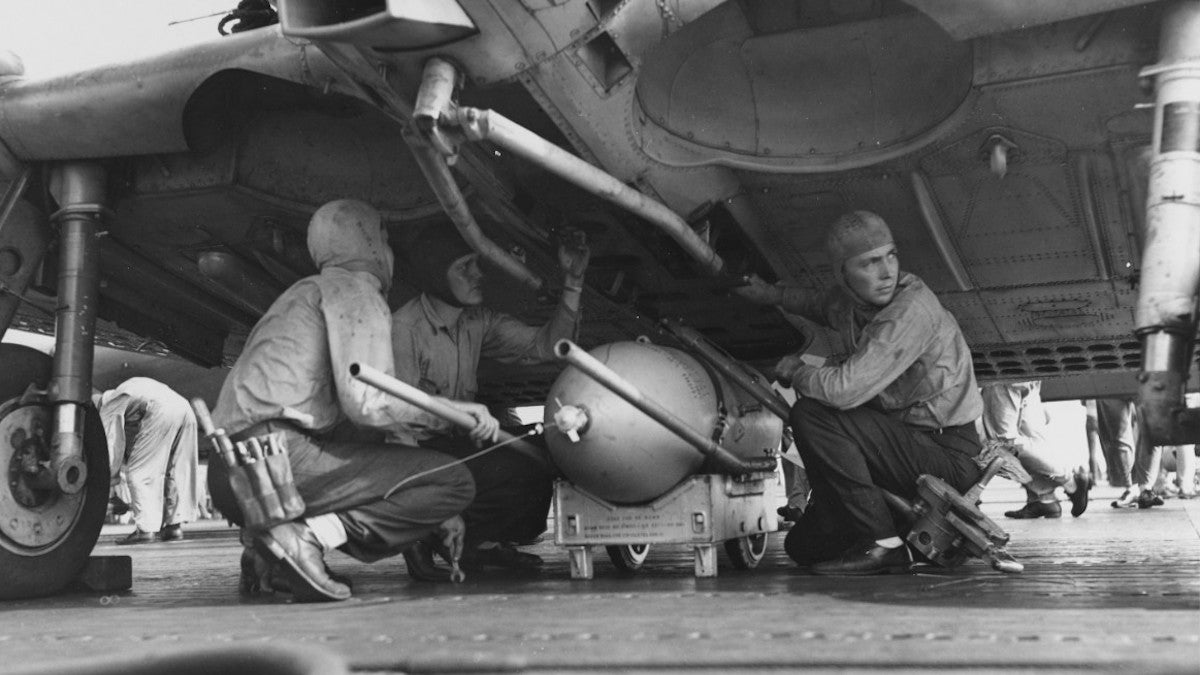 Ordnancemen of Scouting Squadron Six (VS-6) load a 500 pound demolition bomb on an SBD scout bomber on the flight deck of USS Enterprise (CV-6), during the first day of strikes on Guadalcanal and Tulagi, 7 August 1942. Note aircraft's landing gear and bomb crutch; also bomb cart and hoist. Official U.S. Navy Photograph, now in the collections of the National Archives.

In the 109 years of Marine Corps aviation, there have been significant accomplishments, happenings and many global conflicts. However, there’s one moment that’s considered the defining moment in Marine Corps aviation history. Marine 1st Lt. Alfred Cunningham was the first Marine on record to report for flight instruction all the way back in 1912. Over the course of the last 109 years, the most defining moment of aviation came on August 7, 1942, when members of the First Marine Division landed ashore on Guadalcanal in the Solomon Islands.

Marine Corps aircraft weren’t on the scene that day, but that doesn’t mean aviation wasn’t central to the operation. In fact, it was explicitly because the Japanese were constructing an airfield on Guadalcanal that the Marine Corps participated in the first Allied offensive action in the first place.

The Japanese airfield was a direct threat to Australian communication. When the Marines captured it, it remained Henderson Field, after Marine Scout Bombing Squadron 241 commanding officer Maj. Lofton Henderson. Henderson had been killed at the Battle of Midway in June 1942.

Once captured, the airstrip became the object of destructive and concentrated assaults by Japanese ground forces, complete with repeated bombings by enemy ships and air attacks by Japanese airplanes.

Navy, Army Air Corps, and Allied forces all joined in the battle to assist and aid the Marines. However, it was Marine pilots and aircrew who were directly involved with the operations of Cactus Air Force, the Allied codename for Guadalcanal Island. Like the rest of the Allied forces, the Marines came with one central mission in mind – to decimate the enemy and take control of the island and the airstrip.

After the first Marine aircraft landed on the island on August 20, 1942, there was no stopping what they could do. Between first landing in August and six months later in February when the island was considered secure, five Marine aviators performed such heroic acts that they all received the Medal of Honor for their bravery. Additionally, several Marines received the Navy Cross, including famous fighter ace pilots Capt. Marion Carl and Maj. Jack Cram.

The Battles of the Eastern Solomons and the Battle of Santa Cruz both reduced the number of aircraft carriers operating in Guadalcanal’s waters. As this shift occurred, land-based aviation became more critical than ever to help provide defense against the Japanese ships that were attempting to gain back control of the land.

World War II encompasses so many firsts for military strategy, aviation and geopolitics. But nowhere during the war did Marine aviation personnel operate under such hardship conditions as they did during the six month Guadalcanal campaign. Combat aside, the island’s living conditions were absolutely terrible, and many Marines became ill with unfamiliar tropical diseases. Supplies were scarce, so there were reduced rations, inadequate medical supplies, and virtually no help from outside the island. For those who participated in the combat, Guadalcanal got a new name – Operation Shoestring.

In the 245 years that our Marine Corps has existed, there are several battles that epitomize what it means to be a Marine – Iwo Jima, Chosin, even Chesty Puller all bring to mind what it means to serve the Corps. But in terms of sterling Marine aviation, nothing compares to the efforts of the First Marine Division at Guadalcanal.