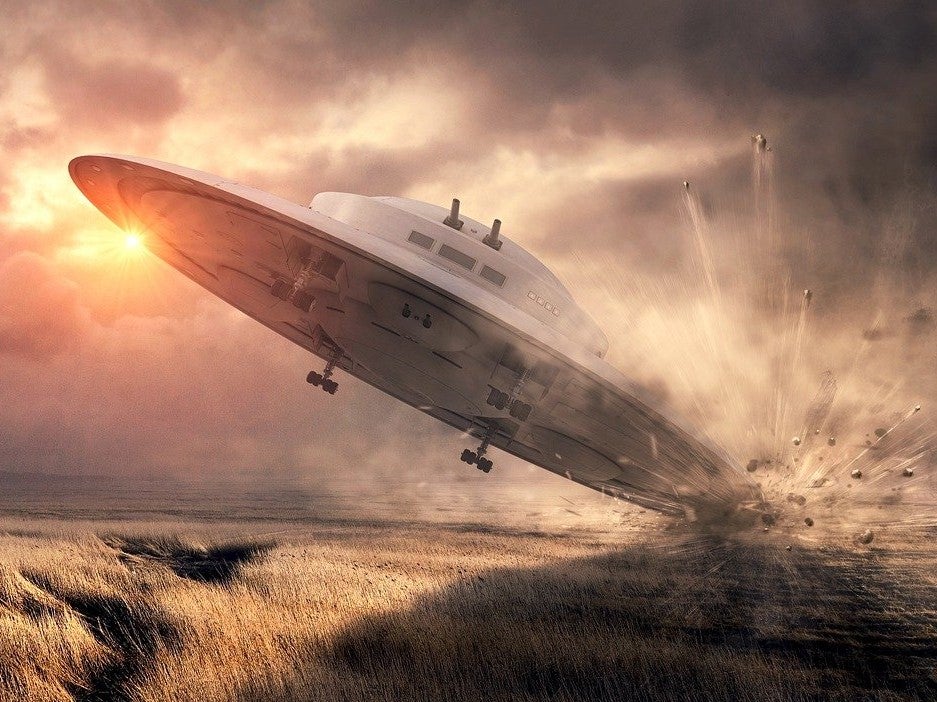 On a cold afternoon in early January, 1948, control tower operators at Godman Army Airfield in Fort Knox, Kentucky, became aware of the presence of a mysterious object floating in the skies of the base. Reports from nearby highway patrol officers who also saw the UFO were enough to prove to the controllers that they weren’t just seeing things.

After a number of senior officers, including the base’s commanding officer, were called up to the tower in an attempt to make sense of what they were seeing, though none were able to actually clarify what exactly they saw through their binoculars. Military personnel at bases in southern Ohio were also able to see the UFO, which remained hovering over a spot before descending to the earth and the rapidly rising out of sight.

Around the same time of the UFO sighting, a four-ship flight of F-51 Mustangs led by Capt. Thomas Mantell of the Kentucky Air National Guard were on their way to Godman. Mantell, a decorated former Army Air Corps transport pilot with combat time during D-Day in 1944, was notified by the control tower about the UFO, and was soon ordered to fly over and identify the peculiar floating object.

Three of the four Mustangs in the flight banked towards the UFO, while one returned to base thanks to a low fuel readout. Pushing their throttles forward, the three F-51 pilots with Mantell in the lead raced to the object.

And within a matter of minutes, the situation began to worsen considerably.

One F-51 had to break off the pursuit, due to low oxygen levels. The second remaining F-51 pilot from the flight was also unable to continue with the chase, ending his run at 22,500 ft before returning to base. Mantell doggedly carried onwards, punching through the clouds.

Controllers attempted to communicate with the 25-year-old fighter pilot, but to no avail. Mantell’s Mustang was last seen in a death spiral, dropping from the clouds like a rock until it impacted earth, shattering into pieces. The young captain was killed on impact, his wristwatch stopped at precisely the time of his demise.

The Air Force’s investigation into the incident was immediate. The UFO had disappeared, and a fighter pilot had been killed — the general public was already frenzied at the prospect of malignant extraterrestrials from other worlds attacking the one they lived in.

Initially, investigators theorized that Mantell was killed “trying to reach the planet Venus.” As crazy as that sounds, the theory held some weight. F-51 pilots had been fooled into thinking that the planet Venus, unusually bright in the night sky at that time of year, was a UFO and had given chase just weeks prior to the Mantell incident.

Though this was the official explanation after Mantell’s crash, astronomers at the Ohio State University disproved this hypothesis in the years after, as the sky was still too bright and hazy in the day for Venus to be clearly observed and followed by the four F-51s of the Kentucky air guard.

A second, more plausible theory, was put forward. Mantell might have actually been pursuing a Navy Skyhook weather balloon. At the time, the Skyhook was part of a highly-classified observation program which neither Mantell and his fellow F-51 pilots nor the Godman airfield controllers would have been read into.

The shape, size and general look of a Skyhook with sunlight glinting off its surfaces would have been similar to what the controllers and pilots saw that fateful day in 1948. Mantell’s loss was partially blamed on his inexperience with the Mustang, though he had accumulated over 2,000 flight hours during his service as a military pilot.

His unwillingness to give up chasing the UFO, even when faced with the potential for oxygen deprivation and starvation in the unpressurized cockpit, caused the pilot to black out after experiencing hypoxia. Only one F-51 in his flight was equipped with an oxygen system – Mantell’s lacked such gear. His Mustang then fell back to earth without him in control.

As plausible as the official statement on Mantell’s untimely passing was, the general public took what happened with a massive air of suspicion. Details on the F-51’s crash didn’t add up, and the fact that the UFO was visible from other military bases and surrounded locales and roadways led many to believe that it was part of a government cover-up.

Though the Air Force’s official explanation for the Mantell incident has remained unchanged over the years, many still question it today, and have since viewed the service’s mad dash to come up with answers as a sign of the military hiding the existence of alien life forms.