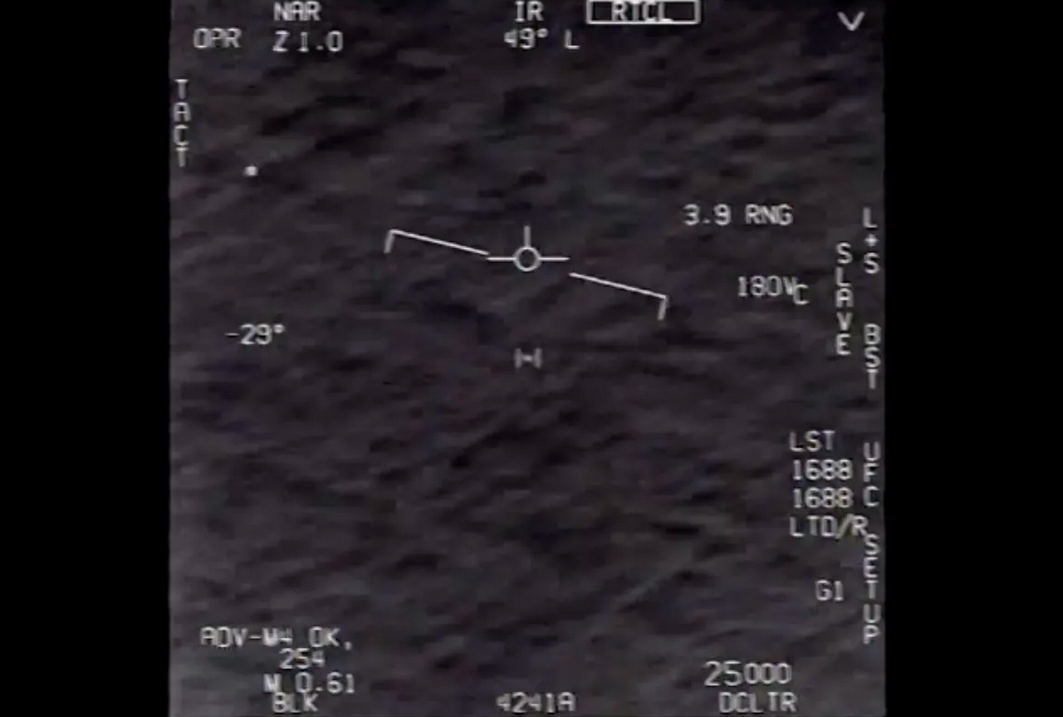 Still from the "GOFAST" video.

Troops who previously did not believe in Unidentified Flying Objects (UFO) are now beginning to take them seriously. Those who witness an unexplained flying object might deem themselves fortunate, even though their sighting may sometimes come from an optical illusion, mental problems or alcohol usage – or another Wednesday night at the barracks. While most people do not believe in UFOs, it seems every time there is an increased threat of us blowing up the planet they are seen more often.

We have videos and photographs of objects in the sky about which we have no idea what they might be, how they navigate, their course or their significance. Many members of Congress are also curious about the issue, as it is somewhat scary to think that there are objects we know nothing about. Nonetheless, serious investigations are being conducted to determine their origin.

In 2017, a new report broke out in the news regarding the US government’s Advanced Aviation Threat Identified Program. The video confirmed an encounter between a Super Hornet and a UFO, raising many questions worldwide. This UFO was detected on the East Coast from an infrared Pod and had similarities with another caught on camera in San Diego in 2004. The UFO was described as a fast-flying, white oval object without wings and exhaust plumes. At 25,000 feet above the Atlantic Ocean, the pilots followed the UFO as it took flight and spun on its axis. No clarification on the matter was ever given.

The tiny hamlet of Stephenville is renowned for its milk production, but on January 8, 2008, several of its inhabitants witnessed something extraordinary in the skies. According to witnesses, white lights were seen atop highway 67, initially in a single horizontal arc and later in vertical parallel lines. According to local pilot Steve Allen, the flashing lights extended roughly a mile long and a half-mile wide and were going at 3000 miles per hour. No sounds were accompanying the mysterious lights. Some believed the lights to be a resemblance to the 1997 Phoenix Lights.

A United Airlines staff member at the airport observed a dark grey, metallic plane floating above gate C17 as Flight 446 was preparing to depart Chicago for North Carolina. A total of 12 United personnel and a few people outside the airport witnessed the incident on November 7, 2006. They said it was saucer-shaped and dark grey, and it was discovered at 4:15 p.m. It also lingered for about 5 minutes before leaving, breaking a hole in the clouds large enough for aircrew and technicians to view the blue sky. Despite the fact that the word spread far and wide, it was classified as a meteorological event because it was not sensed on the radar.

The USS Nimitz detected an unidentified spacecraft on radar 100 miles off the coast near San Diego on November 14, 2004. The team followed UFOs that emerged at 80,000 feet before plummeting to hang just above the Pacific Ocean for a fortnight. As two FA-18F jet fighters approached in the vicinity, they noticed swirling water and the silhouette of an oval figure underneath. A bright Tic Tac-shaped item rose above the sea, shortly afterwards. The aircraft was three times the speed of sound and twice faster than fighter jets, with no wings, exhaust, engine, or windows.

The Lights Above New Jersey Turnpike

On July 14, 2001, a remarkable sight of orange-yellow lights in a V pattern above the Arthur Kill Waterway attracted scores of vehicles to the highway. Even the police department witnessed the phenomenon. Air traffic controllers claimed that the weird sighting could not have resulted from military jets or space flights, leaving everyone with plenty of questions.