Stormin' Norman's Presser about Operation Desert Storm - We Are The Mighty 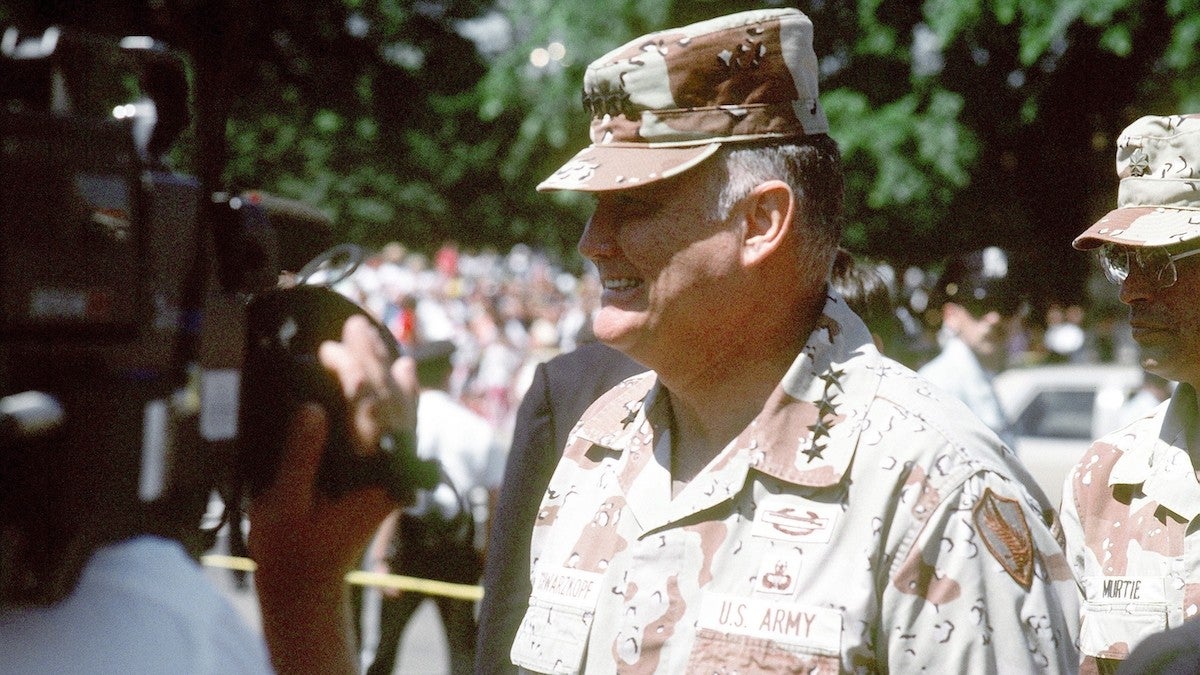 In 1991, Gen. Norman Schwarzkopf knew that victory over Iraq was imminent. Operation Desert Storm lasted just 42 days. Once it ended, Schwarzkopf gave “The Mother of All News Conferences” across the street from his command headquarters in Saudi Arabia. The presser is lauded as being one of the most comprehensive and inviting news conferences ever given by a general of the US Army.

In 1988, Schwarzkopf assumed CENTCOM command. Initially, he was tasked with defending Saudi Arabia from Iraqi aggression. So, he set out to create and strengthen diplomatic relations with both countries. However, talks failed.

So Schwarzkopf quickly realized something else would need to be done to ensure peace in the region. He planned and led Operation Desert Storm. ODS was an aggressive air campaign that was followed by a grueling 100-hour ground operation. This tactic helped the coalition forces achieve victory over Iraq. Kuwait was liberated and Schwarzkopf decided that the best thing to do would be to explain to the world’s press how the battle was won. Units activated for ODS included the 101st Airborne, 82nd Airborne, along with the 24th Mechanized Infantry Division and the 3rd Armored Cavalry. These units were positioned behind the Saudi Arabian task force. Forces were deployed to the region on August 7.

As soon as it was clear Operation Desert Storm was a success, Gen. Schwarzkopf led a presser where he made good on his promise to provide information on how he constructed his mission plan and what the strategy was behind it. During the hour-long press conference, Schwarzkopf gave the following rundown of the mission.

Breaking it down battle by battle

By the middle of November, the decision to increase the number of ground troops was made, in part because of an increase in Iraqi forces to the area.

“We made a very deliberate decision to align all of those forces within the boundary looking north toward Kuwait,” Schwarzkopf briefed, “… so it looked like they were all against directly on the Iraqi positions.”

Adding to that was a very active and very known naval presence in the Gulf. Schwarzkopf said one of the reasons he made sure that the naval presence was so widely known was because it was obvious that the Iraqis were concerned about a water-based attack.

The hour-long brief given by Gen. Schwarzkopf is considered one of the most detailed and comprehensive military news conferences because of the depth and detail that he provided during the presser.

In his cadet picture from Bordentown Military Institute, a ten-year-old Schwarzkopf isn’t smiling. Apparently, he flat out refused and instead, frowned sternly.

“Some day when I become a general, I want people to know that I’m serious.”

For everyone attending the Mother of All Press Conferences, that message was received loud and clear.