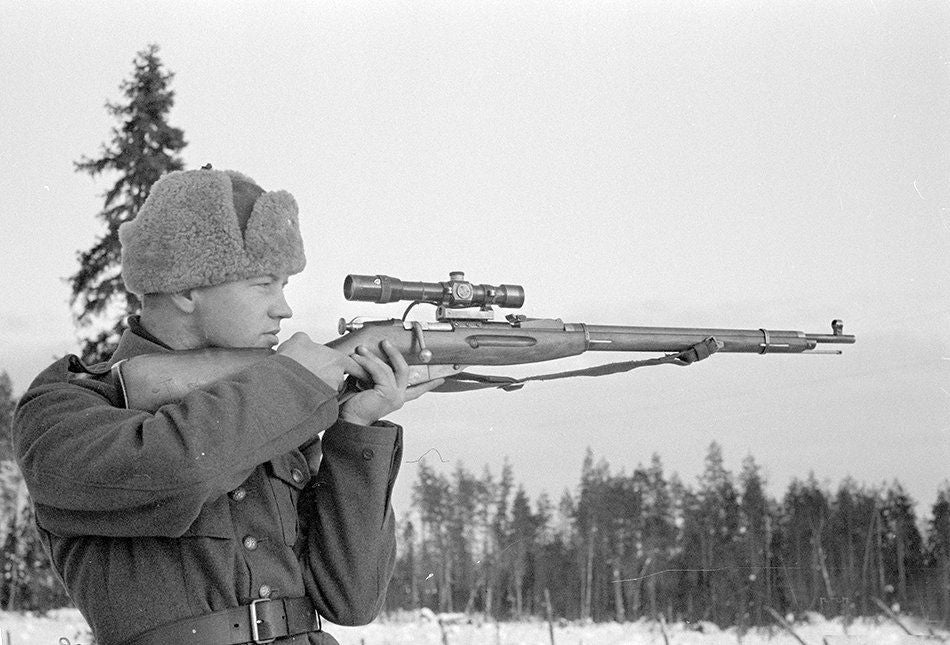 Not every infantry troop can be an expert in hunting snipers. For the Finns fighting off the Soviet Union during the 1939-1940 Winter War and it’s later version, the Continuation War, it could be even more difficult. They were given little training, little in the way of weapons, and pretty much little in the way of anything.

Since the attack from the USSR came so suddenly and the need for reserves so great in the Karelian Peninsula, many Finnish troops just picked up their personal weapons and whatever cold weather gear they had laying around and went off to kill some Russians.

For the most part, it worked. It worked much better than anyone would expect it to, anyway. The Finns were one of the most adaptive fighting forces anyone could have ever wanted fighting off a massive communist invasion.

When they couldn’t kill tanks with their home-bought rifles, they used Molotov Cocktails, which did the trick just fine. When they couldn’t match the Soviets in a pitched battle, they just used snipers to kill as many as they could (which was a lot).

When the Soviets brought out their own snipers, the Finns adapted to overcome that too.

There’s no doubt that there were many places in World War II and the surrounding wars where the fighting was harsh and bitter. They fought two wars in the time spanning World War II, the Winter War, from 1939-1940 and the Continuation War, which started when the Germans launched Operation Barbarossa, invading the Soviet Union.

It’s not cool to be an ally with Hitler’s Germany, but when your only enemy is the Soviet Union and you really want revenge on the communists, it’s the only ally around.

The USSR fighting Finland wasn’t the bloodiest, but the pure hatred was there. Finns definitely tried to get into the heads of Russian soldiers by taking their frozen corpses and putting them on display to scare the incoming enemy. They used a similar tactic to take out Russian snipers.

A sniper is a difficult enemy to root out and kill. The whole purpose of a snipers is to move unseen and kill from a distance without being caught. Think about your average individual, pinned down by sniper fire. Will they know to look for the muzzle flash? Will they know to find disturbed snow or vegetation? Would they be able to estimate distance using the crack of the weapon?

Probably not. Neither did a lot of the hastily trained Finns who were daring and brave, but new to infantry combat. This is where their ingenuity served them well once more. Instead of using a dead Soviet body, the Finns would construct a mannequin to attract the sniper’s bullet. That’s nothing new, soldiers had been doing that for decades.

What is new is the practice of getting a general location of the sniper’s position and then firing a Lahti-39 20mm anti-tank rifle into the vicinity. That’s the solution the Finnish soldiers came up with.

The Finns couldn’t penetrate the armor of the Soviet T-34 tanks, but it was useful in lighting up a bunker, clearing tanks of pesky soldiers before dropping a Molotov Cocktail in them, and for taking down aircraft. If the 20mm Lahti can take down an aircraft and lesser tanks, imagine what it can do to a sniper, no matter how well it’s hidden.

Finland may not have won the the Winter War or the Continuation War, but the Soviet Union paid a heavy price for taking what little of Finland it captured.