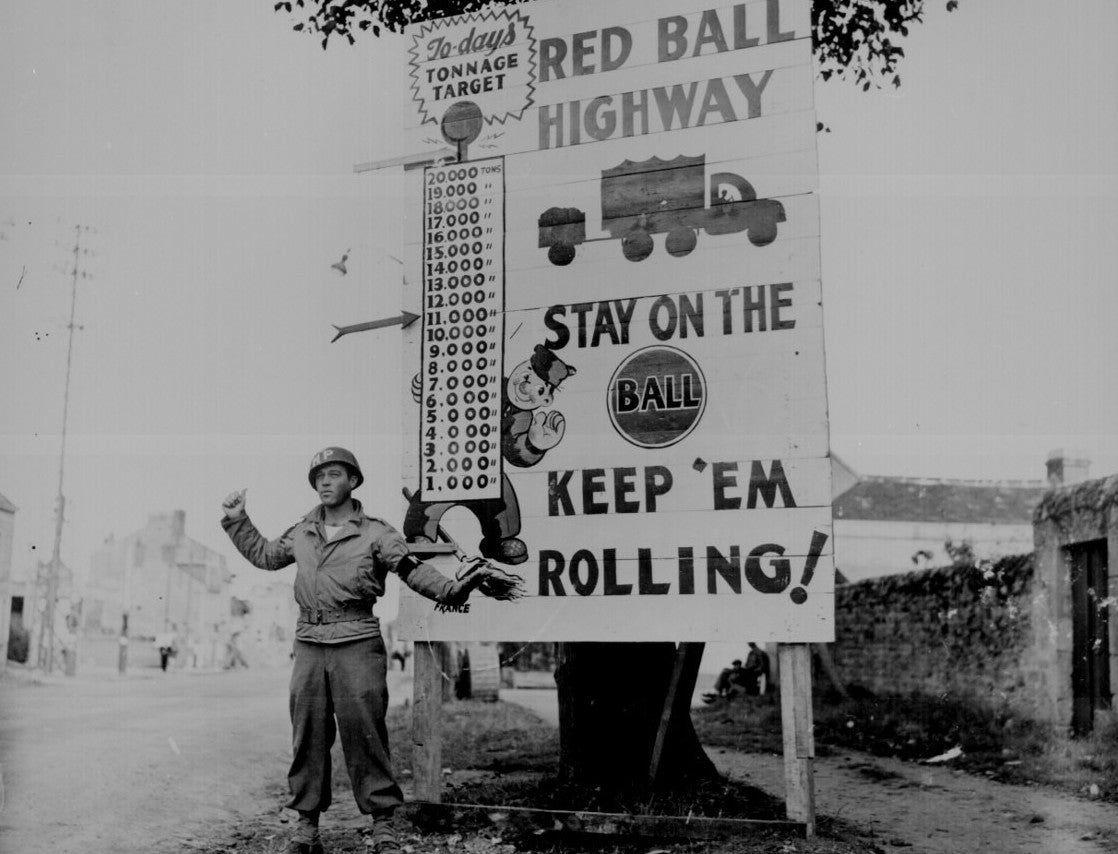 After storming the beaches of Normandy and fighting through the hedgerows of the French countryside, the Allied forces invading Nazi-occupied Europe came across one problem they hadn’t anticipated: outrunning their own supply lines.

By July 1944, the Allied advance nearly ground to a halt. Every operation was decided by one major factor, which was how much supply it required versus how much could be delivered. It would be almost three months before French railways could be repaired and portable gas pipelines could be installed.

To move the necessary supplies and keep the pressure on the German army, Allied war planners created a massive, truck-based supply convoy run primarily by Black soldiers. It became known as the “Red Ball Express.”

The Allies need a continuous supply of necessary fuel, ammunition, ordnance and food to keep running to the front. After breaking out of the Normandy area, the infrastructure the Allies damaged to hamper the German response needed repair to be used for the German defeat.

There had to be a way to move 750 tons of supplies from the port of Antwerp to multiple locations across the front every day. Just one armored division alone required 350 tons of gasoline.

After brainstorming for 36 hours straight, planners came up with a solution: a convoy of thousands and thousands of trucks, constantly streaming to and from the front lines.

No truck could travel alone, they had to travel in a convoy of at least five total trucks and each was marked with a number indicating its position in the line of trucks. To mitigate the risks of high speed driving or of a truck pile up in an accident, trucks were ordered to drive just 35 miles per hour and maintain a specific clear distance from each other. The order to drive slower was rarely followed, many drove at twice that speed.

Without these soldiers at the wheel, World War II in Europe might have dragged on for another full year. Gen. Dwight D. Eisenhower saw the Red Ball Express as the most critical lifeline to the advancing armies, just as important as the combat units themselves.

Of course, these early trucks got stuck in traffic, both civilian and military. So the Allies created two priority roads just for the supply trucks, which became known as the Red Ball Line, named for the red spots marking the trucks and the routes that were closed to civilians.

At its height, the Red Ball Express was operating almost 6,000 trucks per day to move 12,500 tons of various supplies, fuel, and ammunition. Since the German Luftwaffe was almost nonexistent by this point in the war, the biggest problems facing the convoys were maintenance of the trucks and the overworked drivers.

Eventually, the rail lines were repaired and the Red Ball Express was no longer necessary. After more than 80 days of continuous operation, the convoy drivers had delivered more than 400,000 tons of supplies to the Allies in combat.