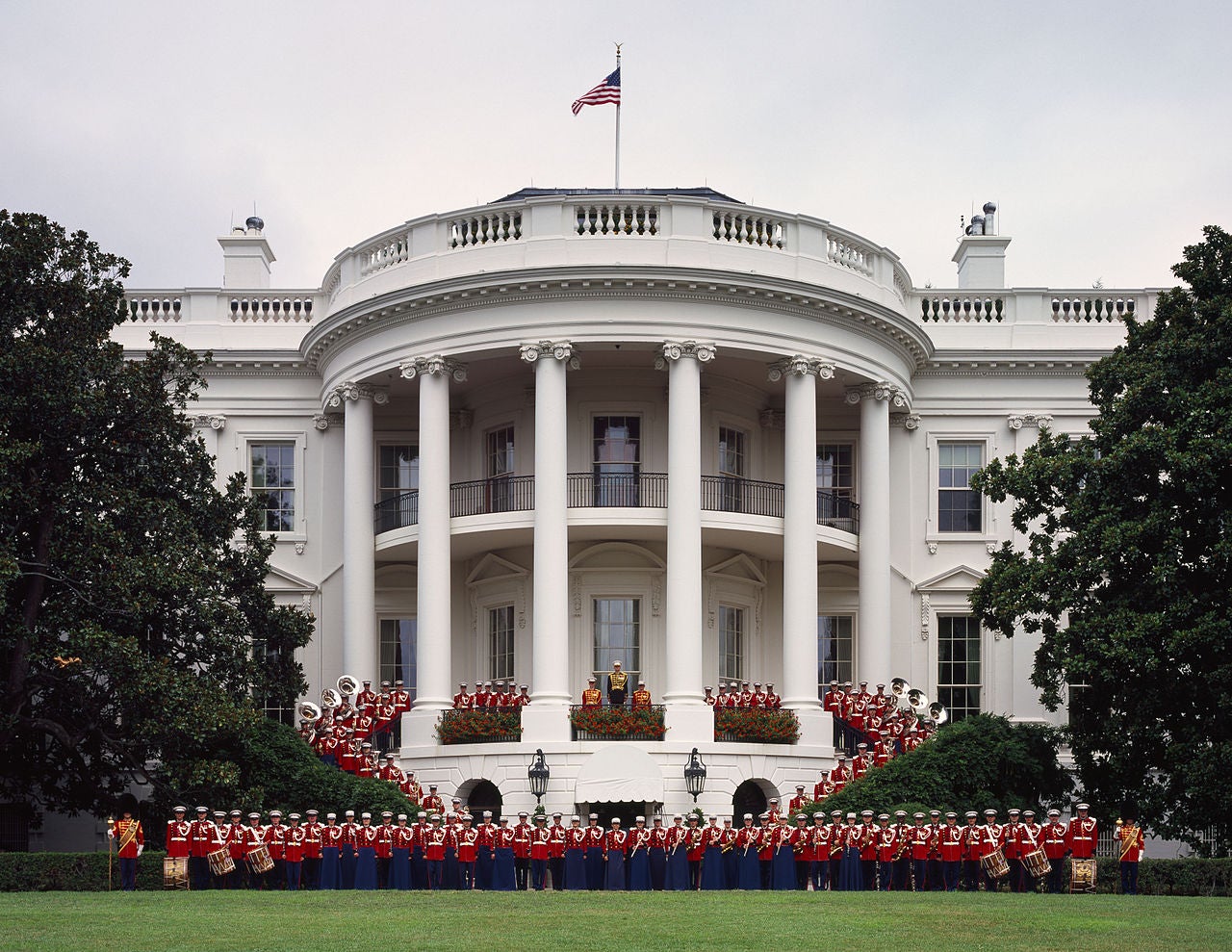 “The President’s Own” United States Marine Band, pictured here on the South Portico of the White House, is the oldest performing musical organization in the United States. It was established in 1798, and performs at the White House more than 300 times annually.

There are few songs at we associate exclusively with the President of the United States. Many presidents had different views about the song; for instance, Chester Arthur disliked it and thought it was ridiculous, but Ronald Reagan believed it was a crucial custom for the office. Following 45 seconds of four Ruffles and Flourishes, the President’s personal Marine Corps band performs “Hail to the Chief” during the President’s Induction.

There are no set criteria for the anthem other than that it is most commonly performed whenever the American President arrives at an official function. According to the Defense Department, the song can and should only be performed for the current President. This means former US presidents do not get the pleasure of hearing the song whenever they are at a function.

Allegedly, the song’s lyrics were written down in 1900 by an artist known as Albert Gamse but is dated back to John Quincy Adams, the sixth president of the United States. The anthem was popular when people first heard it, as with Greenwood’s music to President Trump.

The first President to listen to the song performed during his inaugural was Martin Van Buren. John Tyler, who took office after the unexpected death of William Henry Harrison, received a lot of flak for his illegitimate ascent to the office. His wife, Julia Tyler, made sure the anthem was performed every time he appeared at gatherings as a reminder of who was in power. James Polk, a short man, received the same treatment, and to prevent him from going unnoticed, his spouse Sarah ensured the anthem was played. She was determined to make everyone notice that the President was in the room on occasions, and what better way to bring this out than begin with a presidential anthem?

By the time Arthur assumed power in 1881, the song had become customary and was performed so frequently that he chose to substitute it with another tune since he detested it so much. He was fortunate that John Sousa was conducting the Marine Band and was willing to make an effort. He asked the Marine Band commander to write a substitute, and the composer dutifully obliged. Since the President is technically the boss, the band played the substitute for President Arthur but was soon revoked. How good the substitute song was is a mystery to most Americans because it was the presidents that followed Arthur who preferred the former version.

Perhaps, President Arthur’s taste in music differed from all the others who assumed office before and after him. In 1954, the Defense Department ensured the song became the official presidential anthem and has not been changed since then. However, being the commander in chief, if a president doesn’t like the song, he or she can request it not to be played or to substitute it. No law binds the President of the United States to the song. In fact, President Gerald Ford asked his Marines to play a different tune, “Hail to the Victors,” instead of the famous “Hail to the Chief.”

Although the song’s lyrics are now long entrenched in our democracy, the Department of Defense still closely monitors its melodic line, ordering the Marine Band to perform it only for current presidents in dignified settings and at funeral services for former presidents. The Marine Band is required to perform it using the B-flat major key.