How foreign auxiliary troops became Roman citizens - We Are The Mighty 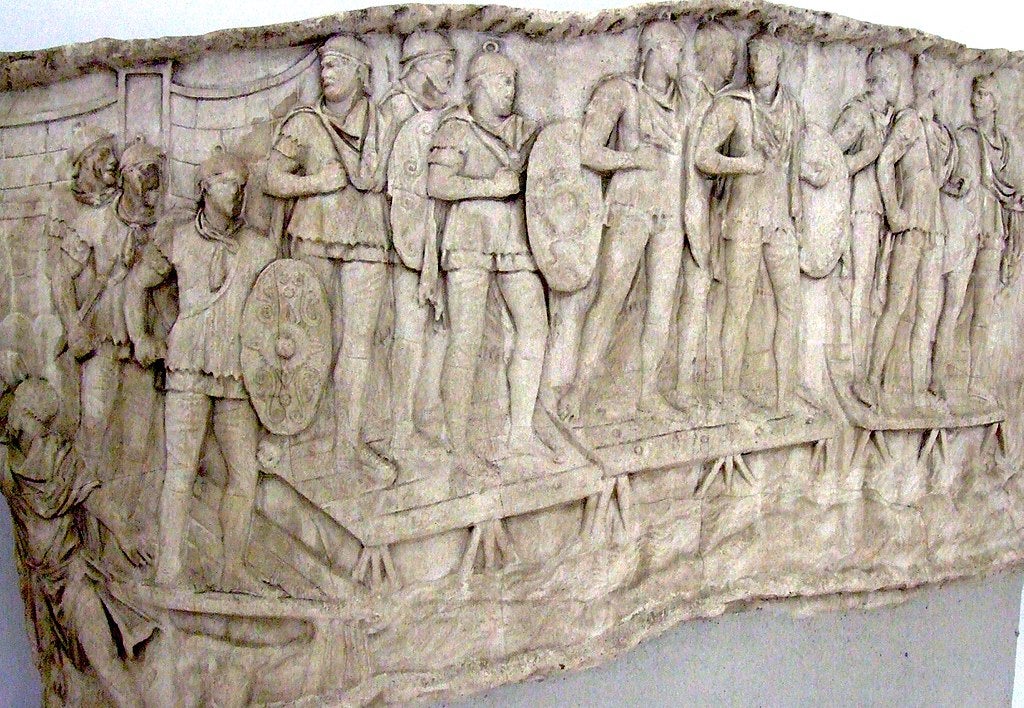 Roman auxiliary infantry crossing a river, probably the Danube, on a pontoon bridge during the emperor Trajan's Dacian Wars (AD 101–106). They can be distinguished by the oval shield (clipeus) they were equipped with, in contrast to the rectangular scutum carried by legionaries. Panel from Trajan's Column, Rome.

Roman soldiers are typically depicted as wearing a scarlet tunic, rectangular shields, plated armor and iron helmet. As the title implies, these were your stereotypical Roman legionary soldiers, warriors who fought for Rome’s illustrious legions. However, from its inception, the Roman army heavily used allies or auxilia. But who were these auxilia soldiers, and what made them different from their legionary counterparts?

Since the early republic, when Rome fought for control over the Italian peninsula, Rome’s armies consisted of soldiers who were Roman citizens and troops from allies who were non-Roman citizens. These allied armies were made up of levies from subjugated city-states and small nations from the Italian Peninsula like the Latins, Etruscans and Samnites. They were called upon whenever Rome went to war with neighboring communities and made up the bulk of Roman forces, which was essential for Rome’s success.

Even though they fought and died alongside the Romans, they did not get a share in their obtained power. According to Roman rule, non-Roman citizens did not have the right to vote or be eligible for political offices. Being a Roman citizen also offered more legal protection and other benefits on which they missed out. The allies were true second-class citizens to the Roman state despite the price they paid in blood.

Rome was not treating its allies how they deserved to be treated, and this unjustness had been smoldering for ages. Eventually, the murder of a Roman politician who stood up for the allies’ rights formed the spark to the powder keg. From 91 to 88 BC, a conflict raged between Rome and its former allies called the “social war.” In the end, Rome was victorious, but not without getting dangerously close to defeat. Rome now realized the necessity of keeping its allies happy.

So, despite winning the war, Rome granted the allies’ wishes and virtually gave all Italians Roman citizenship, making them legally equal to the Romans. Now being Roman citizens, these people were no longer recruited as allies but as legionary soldiers. The auxiliary troops under the Roman republic were separate entities not incorporated into the Roman system. They wore their own equipment, had their fighting style, a separate command structure and language, and were in service for just the length of the campaign.

The same applied to foreign mercenaries that Roman generals employed. They can be viewed as auxilia, but more literally, they are auxiliary to the Roman army. A change was seen when emperor Augustus took charge about 50 years after the social war. Under his rule, auxiliary troops became a permanent feature of the Roman army. Instead of serving the length of a campaign, the length of their service was fixed, as was their pay. His successors continued with the standardization of the auxilia, with the troops receiving the same training as legionaries and getting more standardized equipment.

From this moment onwards, the auxilia became what we now recognize as auxiliary troops. They served within Roman command structures, listened to Latin orders, and wore Roman-supplied armor. The auxilia was allowed to operate independently from the legions, truly becoming their own. No longer did auxiliaries serve alongside the Roman army, but in it. Even though there were now a lot of similarities between auxiliaries and legionaries, they were still considerable differences. One of the most crucial disparities for the soldiers themselves was their legal status. Unlike in the past, the auxilia was now considered Roman citizens. Under emperor Augustus, rewarding auxiliary units with Roman citizenship was sporadic and only reserved for the bravest and loyal.