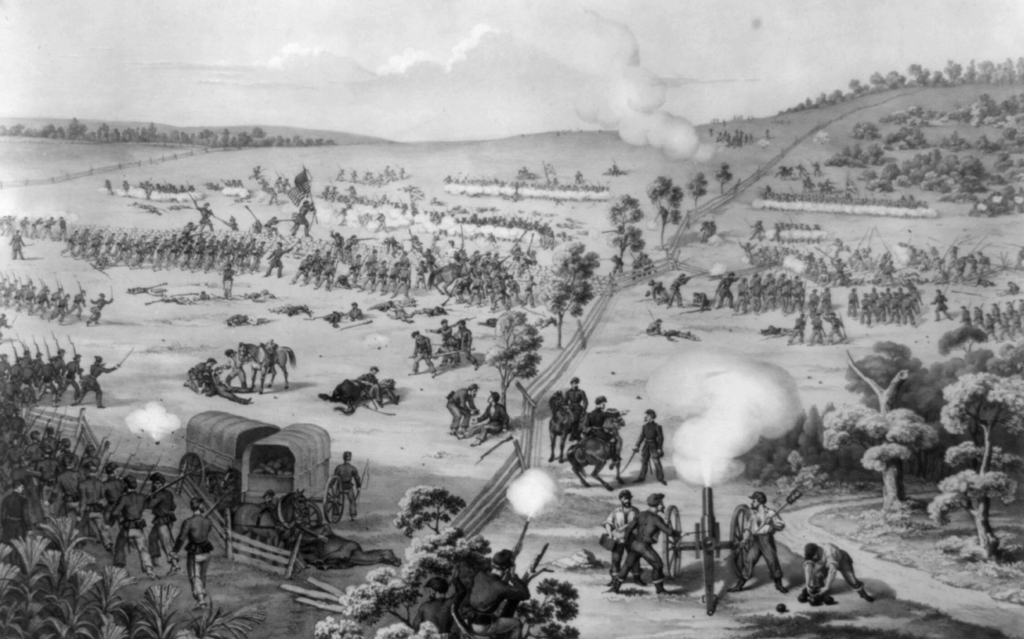 While the Battle of South Mountain itself won’t be written about in history textbooks, the overall effort to expel Confederate forces from Maryland is, and the Union victory there was critical in forcing Robert E. Lee’s Army of Northern Virginia back into Northern Virginia.

The Civil War battle that two future presidents fought in was more like a battle within a battle. The fight for South Mountain was fought for control of three passes through the Blue Ridge Mountains of Maryland. Those passes, known as Crampton’s Gap, Turner’s Gap and Fox’s Gap were controlled by Confederates at the start of the battle.

At Fox’s Gap, the IX Corps led by Maj. Gen. Jesse Reno moved on the Confederate positions at 9am on Sept. 14, 1862. Brig. Gen. Jacob D. Cox’s Kanawha Division of the 23rd Ohio pushed through the Confederate lines but his men were slowed by exhaustion. The delay in capitalizing on the advance allowed the Confederates to deploy reinforcements and pushed the Union troops back through the gap.

Reno was killed by a confused Union soldier in the fighting. Another officer, the 23rd Ohio’s Lt. Col. Rutherford B. Hayes, was seriously wounded at Fox’s Gap while leading a flanking movement. Interestingly enough, one of the 23rd Ohio’s logistics sergeants was Sgt. William McKinley. Hayes would go on to become the 19th President of the United States after the war. McKinley would be elected the 25th President.

The battle itself was ultimately decided at the battle for Crampton’s Gap. Just as the Union forces at Fox’s Gap were pushed away, so too were the Union troops attacking Turner’s Gap. Crampton’s Gap saw 12,000 Federal soldiers advancing on a mountain pass that was defended by just 500 Confederate soldiers.

With the loss of Crampton’s Gap to the Union and heavy losses and unsure positions at the other two gaps, Gen. Robert E. Lee decided to withdraw from South Mountain and regroup his main force – with disastrous results for the Union Army.

The Battle for South Mountain should have been a rout in the Union’s favor for a number of reasons. The most important reason was that the commander of the Union Army, Gen. George B. McClellan, had acquired Lee’s entire plan of movement for the Maryland Campaign and knew every move the Confederate general was going to make.

Somehow, Special Order 191 was wrapped in a packet of three cigars and left in a campground as Union soldiers from Indiana marched into the area. It was picked up by Cpl. Barton W. Mitchell of the 27th Indiana Volunteers and given immediately to the Union command. McClellan knew that Lee’s forces were divided and vulnerable as Gen. Stonewall Jackson was sent to capture Harper’s Ferry, Virginia to secure Lee’s rear while Lee waited with the rest of the army at Boonesboro.

McClellan’s delays at the Battle of South Mountain allowed Lee to retreat and join his forces back together, quickly dousing any hope for the Union destroying Lee’s Army of Northern Virginia in detail. McClellan’s concentration on the gaps at South Mountain also ensured the fall of Harper’s Ferry as Jackson led a force of at least 22,000 Confederates against the Union garrison of just 15,000.

The saving grace for McClellan and the Union Army was that South Mountain and the subsequent Battle of Antietam gave the Union forces a much-needed win, a morale booster for a Federal force who had been mentally and physically beaten down by a string of losses to the south.