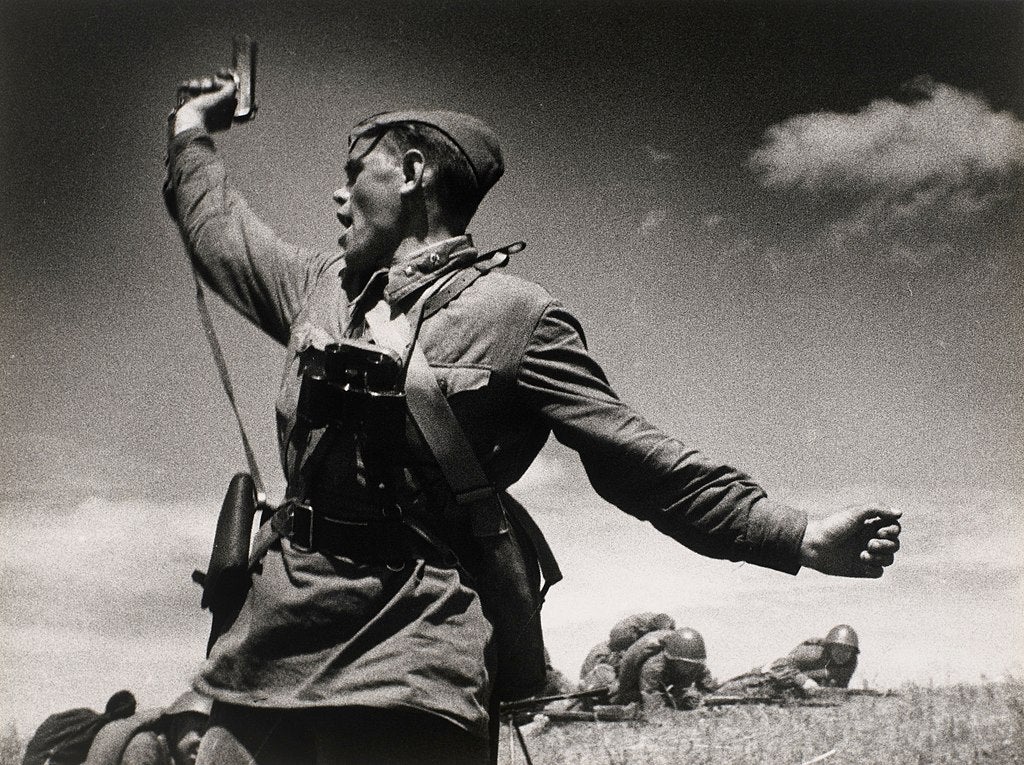 Iconic photo of a Soviet officer leading his soldiers into battle against the invading German army, 12 July 1942, in Soviet Ukraine. (Wikimedia Commons).

Everyone knows the fighting on World War II’s eastern front was bitter and brutal but just how bitter and brutal can really only be seen in individual interactions between the sides. Of course, there are hundreds of stories about the fighting in Stalingrad and the crimes committed against Soviet citizens by the German Army and SS.

Maybe the best example is the incident that happened between a German Army patrol and one Red Army soldier, Dmitry Ovcharenko. Anyone who survived this incident was unlikely to forget it – if there were any survivors at all.

Ovcharenko was a peasant soldier, recruited from Lugansk, Russia. He grew up without much of an education, but joined the Soviet Army long before World War II came to the USSR. When it did and Germany began its invasion of his homeland, Ovcharenko put on the uniform once more and set out to repel the invaders.

His time in combat wouldn’t last for very long. He was wounded at the very beginning of Operation Barbarossa in 1941, but he wasn’t removed from the front lines. He was known for his strength and could still walk, so he was tasked with moving food and ammunition from Soviet supplies to the front and distributing them.

On July 13, 1941 Ovcharenko was at work doing that job when he was stopped by a German squad of 50 men. They stripped him of his weapons and his deliveries and sat him near his carriage to interrogate him. As he sat in the hay on his carriage, he remembered that an ax and a box of grenades was within reach, a dangerous weapon for any soldier, but devastating in the hands of a seasoned veteran like Ovcharenko.

As he sat for his interrogation by a German officer, in one fell swoop, he grabbed the ax and swung it around to cut at the officer’s neck. It lopped the German’s head clean off of his body. The German troops stared blankly at what had just occurred, covered in blood and literally stunned beyond belief.

Ovcharenko wasn’t stunned, however. He had been fighting Germans for a long time, in all kinds of conditions, and being covered in the blood of his enemies didn’t faze him one bit. He grabbed the nearby box of grenades and threw them at his captors as he ran for the nearest treeline. The box exploded and killed almost half of the enemy soldiers instantly.

By then the German squad was in full retreat mode. When Ovcharenko realized he was winning the engagement, he decided to press his advantage. He came out of the treeline with the ax in his hand and began to run down the enemy as they ran away. He caught up to one slow-moving officer and lopped his head off too.

With an angry Russian soldier covered in blood and wielding an equally bloody ax running at them, the German booked it out of there as fast as humanly possible, anxious not to be another victim of the ax-murdering Russian who was both stronger and faster than he looked.

What should have been the quick interrogation and execution of a Soviet supply sergeant turned into a grisly scene out of a horror movie that had yet to be made. Ovcharenko was awarded Hero of the Soviet Union and sent back to fight in a machine gun squad. He didn’t survive the war, however. He was killed in Hungary in 1945.