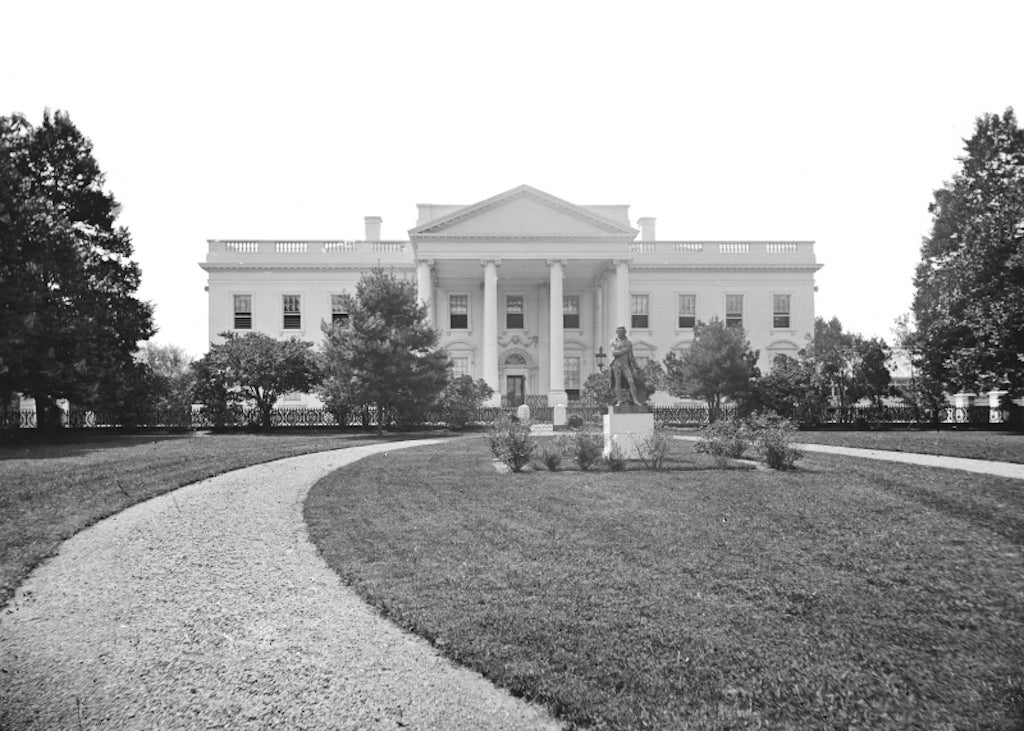 The North Lawn during the Lincoln administration.

The White House is one of our nation’s most iconic buildings. Associated with not only politics but deeply rooted in United States history, it’s a landmark that many travel near and far to set their eyes on in person. However, there is much that we still don’t know about the building and grounds themselves.

Take a look at these little-known White House facts and see what new and quirky facts you can take in about the building.

Obviously, it’s a massive space, but with nearly 55,000 square feet, there’s a lot of space to keep warm. That includes an incredible 28 fireplaces spread throughout the building’s six floors. There are also 132 rooms, 32 bathrooms (imagine cleaning all of those toilets!), 412 doors, and seven staircases.

It’s been on fire, twice

The original White House was almost completely burned down when the British set it ablaze in 1814, in response to the U.S. lighting Canada’s parliament. Only a few exterior walls – made of stone – remained after the fire, that and a painting of George Washington, which was snagged by Dolley Madison herself.

The second fire landed in 1929 when a fireplace flue was blocked on Christmas Eve. It took out the West Wing and Oval Office; sitting president Herbert Hoover was escorted out by the Secret Service. No word on if Santa was the culprit for the blocked flue.

There is a replica version

Though much smaller, at “just” 14,000 square feet – a replica White House exists in McLean, Virginia. Reportedly worth about $5 million (in contrast to $286 million in D.C.), there is also a full-sized Oval Office and Lincoln bedroom. The property’s original owners used actual building plans from the OG model and created their own, smaller version.

There’s also a Western White House, spanning 17,500 square feet in California, and other versions throughout the world.

When painting the exterior of the White House, an incredible 570 gallons are needed to coat the building.

When plans for the president’s mansion were to be put into place back in 1792, the masons did a little too much celebrating. They placed an inscribed cornerstone, marking both the occasion and its importance. However, after several celebratory drinks – supposedly 16 toasts’ worth – no one could remember the location of the cornerstone. There’s a theory it was embedded somewhere in the Rose Garden, but has never been located.

Deep below the James S. Brady Press Briefing Room sits one of the White House’s best-kept secrets, an indoor pool. Known for his love of swimming, FDR had it installed in 1933 so he could swim inside throughout the entire year. (There is also an exterior pool that was installed in 1975.) However, it’s since been covered and is used today to brief the press.

In a single stretch, staffers must pack up the sitting president’s belongings, artwork, and furniture. The walls are repainted, based on the incumbent’s wishes, and new art and furniture are placed. Finally, new belongings are unpacked and placed – in just a single portion of the day.

Presidents aren’t charged to live in the White House, but they do have to pay for outside expenses, such as their food (there and elsewhere). In addition, they have to pay for events, including the staff working them, and transportation. This can seriously add up; just ask Bill Clinton, who was $16 million in debt when he left office. (However, his was also due to legal fees.)

At least 10 people have died there

Yes, the Tom Hanks is the reason the White House has coffee in its press room. When touring in 2004, he is said to have been in shock at not being able to get a cup of coffee. He then remedied the situation by purchasing and sending a coffee machine for the room. Again visiting six years later, he saw that the machine was getting worn out and sent yet another coffee pot. Again in 2017, Hanks provided a new coffee machine, a $1,700 espresso machine, with a note reading, “Keep up the good fight for truth, justice, and the American way. Especially for the truth part.”