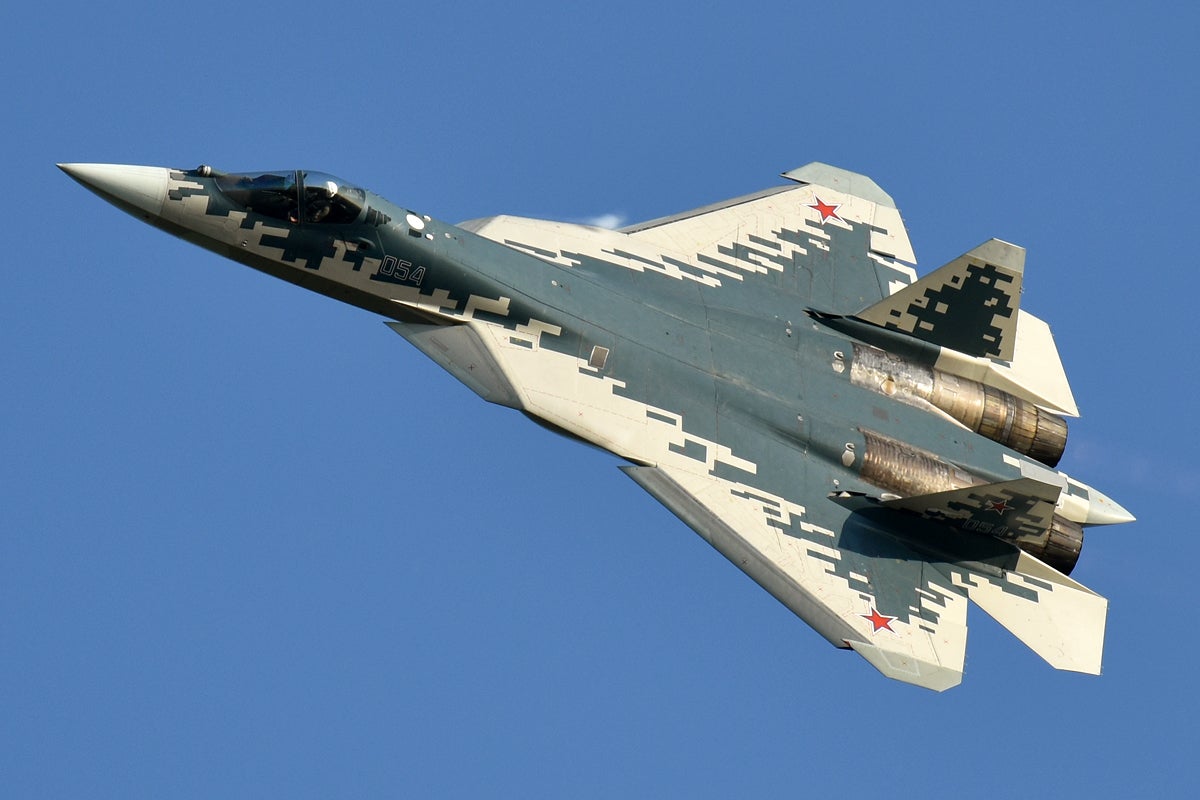 In 2005, the US Air Force formally adopted the F-22 Raptor, a fifth-generation air superiority fighter. Potential adversary nations have been trying to catch up ever since. Russia’s match to the Raptor is the Sukhoi Su-57. The single-seat, twin-engine, multirole fighter is the first Russian aircraft designed with stealth technology. Here are 5 things you didn’t know about Russia’s newest fighter.

When depicting modern and near-future conflicts in media, the Su-57 is a natural adversarial aircraft to use. As the cutting-edge stealth fighter of Russia, it makes for a good matchup against western fighters like the F-22 and F-35. One of the first appearances of the Su-57 in media was in Ace Combat: Assault Horizon in 2011 where it was named the PAK-FA. A Russian acronym and initialism that translates to “Prospective Aeronautical Complex of Front-Line Air Forces,” PAK-FA is the fighter program that spawned the Su-57. In 2013, the Su-57 appeared in Battlefield 4 as the Su-50. This name is based on the Sukhoi internal designation for the aircraft, T-50. Ace Combat returned with the Su-57 in 2014’s Ace Combat Infinity as the T-50 PAK-FA and finally, in 2019, with Ace Combat 7: Skies Unknown where the aircraft is finally designated the Su-57. In 2021, Battlefield 2042 included the 2019 production version of the aircraft and designated it the Su-57 Felon.

The T-50 prototype suffered multiple setbacks and delays leading up to the final production and adoption of the Su-57 by the Russian military. During a 2011 public showcase, the airframes of the first two prototypes cracked during flight despite having a 5-g restriction. Engine problems also occurred including a compressor stall. In 2014, another prototype suffered an engine fire and was completely written off. In December 2019, the first production Su-57 crashed during factory trials prior to its delivery to the Russian military. Despite these setbacks and problems, Russia boasts that the aircraft has g limits exceeding 9.0 and is capable of Mach 2. The Su-57 is reportedly armed with an internal 30mm autocannon and features 12 hardpoints, 6 internal and 6 external, for missiles and bombs. Coupled with advanced avionics like a powerful radar, infrared search and track, an ultraviolet missile approach warning system, and an electronic countermeasure suite, Russia touts the Su-57 as the most capable fifth-generation multirole fighter in the world.

On February 21, 2018, two Su-57s were spotted operating out of Khmeimim Air Base in Syria. They were reportedly joined by another two Su-57s three days later. On March 1, Russian Defence Minister Sergey Shoygu announced that two Su-57s spent two days in Syria and successfully completed a trials program including combat trials. In November, the Russian Defence Ministry published a video depicting two Su-57s operating in Syria. Despite the title of the video, no footage of combat or weapons deployment is shown. Moreover, Russian claims that Su-57s were used two to three weeks after the start of the 2022 Russian invasion of Ukraine to strike targets outside the range of Ukrainian air defenses. Claims of performance in Syria and Ukraine could be part of Russia’s push to market the Su-57 to foreign nations.

Development of a modern stealth fighter is extremely costly, especially for one with as many setbacks and delays as the Su-57 experienced. Despite sharing the cost with international partners, the US military’s F-35 program blew its budget with an expected acquisition cost of $406.5 billion in 2017. In order to recoup some of the development costs of the natively designed and built Su-57, Russia hopes to sell an export version, the Su-57E to foreign militaries. This is a common practice for Russian military equipment with planes, tanks, helicopters, and small arms being sold around the world. The primary selling point of Russian equipment is its generally cheaper cost compared to western equipment. The Su-57 has been unsuccessfully pitched to South Korea, Brazil, and Turkey. The UAE expressed interest in the aircraft but has not signed a contract with Russia to avoid US sanctions. Iraq has also expressed interest in the Su-57 but no deal is reported to have been made. India signed on as a customer early in the Su-57s development but has canceled the contract claiming that the aircraft did not meet its requirements for stealth and avionics. In 2019, Algeria reportedly signed a contract for 14 aircraft that includes Su-34, Su-35, and Su-57 fighters. Once Sukhoi fulfills the Russian military’s order, Algeria is set to receive its first Su-57 in 2028. In 2021, Vietnam announced its intention to purchase the Su-57 but was critical of the aircraft’s workmanship. No further details were released by Vietnam or Sukhoi. Following the 2022 invasion of Ukraine, existing and future deals with Russia are uncertain at best given the condemnation that would likely come from the international community.