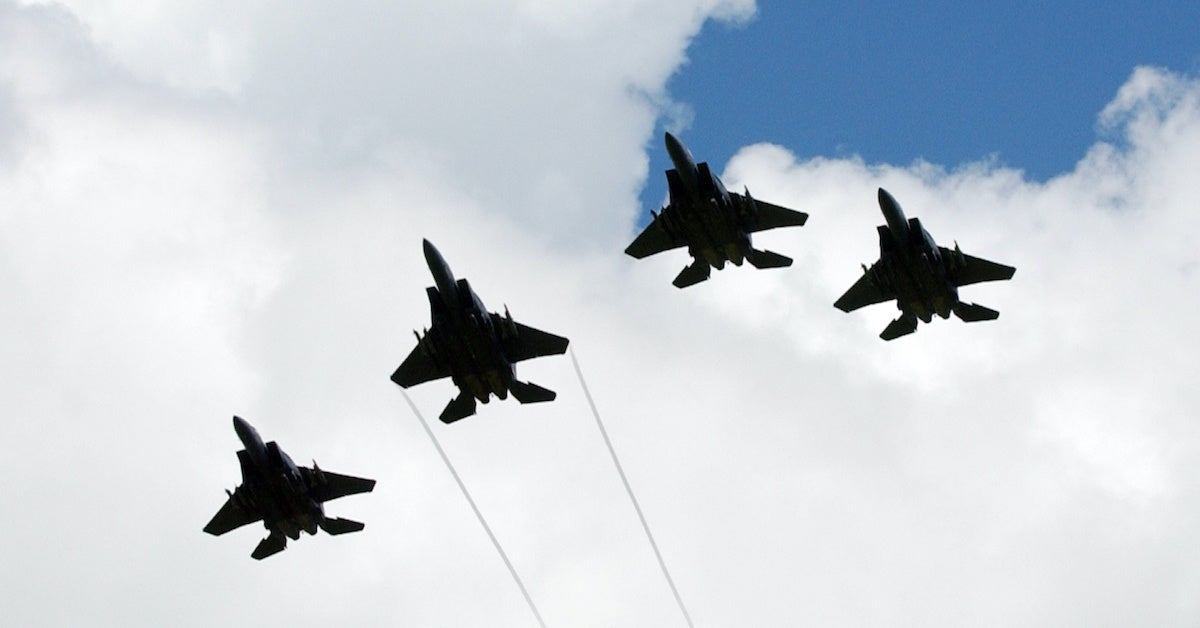 Established in 1979 through a proclamation signed by President Jimmy Carter, National POW/MIA Recognition Day is an annual event held on the third Friday of September. This event is usually held at the Pentagon and is often observed at military installations around the country.

Generally somber events, the observances at installations around the country mark the fact that the American military does not forget about our Prisoners of War or those Missing in Action. Here’s everything you need to know about this important day.

The first POW/MIA Recognition Day included a ceremony held at the National Cathedral in Washington, D.C. The 1st Tactical Squadron from Langley Air Force Base flew the Missing Man formation.

This formation is an aerial salute performed as part of a fly-past of aircraft at funerals and memorial events. There are several variations of this formation, but the most common is based on the “finger-four” aircraft combat formation, which includes two pairs of aircraft.

Aircraft fly in a V-shape with the flight leader at a point and his wingman on his left. The second set of aircraft replicates the shape, with a wingman on the right. The formation flies over the event low enough to be seen. Once seen, their airman leading the second set pulls out of formation, and the remaining three aircraft continue in level flight until all are out of sight.

You Are Not Forgotten

This is the central phrase belonging to all POW/MIA remembrances to remind family members that America still concerns itself with those who are missing in action or who are suffering as prisoners of war.

POW/MIA Recognition Day aims to ensure that every American remembers to support those who serve in the military and risk their lives for our freedoms.

POW/MIA by the numbers

A Congressional research service report on POWs showed that 37 service members had been imprisoned during conflicts since 1991. This includes both Gulf Wars. At the time of writing, none of the POWs are still in captivity. However, during WWII, 130,201 service members were captured and imprisoned, and 14,072 died.

Of all the service personnel who participated in these wars, there are still 83,114 missing Americans. This includes six from conflicts from 1991, 126 from the Cold War, 1,626 from the Vietnam War, 7,841 from the Korean War, and approximately 73,515 from WWII.

Roughly 75 percent of all missing American personnel are thought to be somewhere in the Asia-Pacific region. More than 41,000 have been presumed lost at sea.

There’s a little bit of hope

Efforts to find these service members, identify them correctly and bring them home are constant. In 2019, 41 MIA service members from the Korean War were accounted for, and of them, ten were previously buried as unknowns. Remains turned over by North Korean authorities helped identify 26, one was a recovery operation and four were combinations of recovery operations and the return of remains.

WWII pilot Newt Heisley designed the very famous POW/MIA flag, which features a black background and white lettering. The black and white color scheme was selected by Heisley to represent the sorrow and anxiety that accompanies POW and MIA service members. The hope that we all must have is represented by the image of a gaunt man featured on the flag.

Since 1982, for every POW/MIA Recognition Day, the flag has flown just below the National Colors at the White House, and it’s the only flag ever to do so. The flag is also flown on Armed Forces Day, Memorial Day, Flag Day, Independence Day and Veterans Day.

Flying a flag at home helps remind us never to forget our POWs and those missing in action. No matter if you fly the colors or choose to wear a bracelet or piece of clothing to show your support, it’s important to remember the sacrifices that POWs and MIAs have made for our country and how we have to live up to our end of the bargain to help them make it back home.