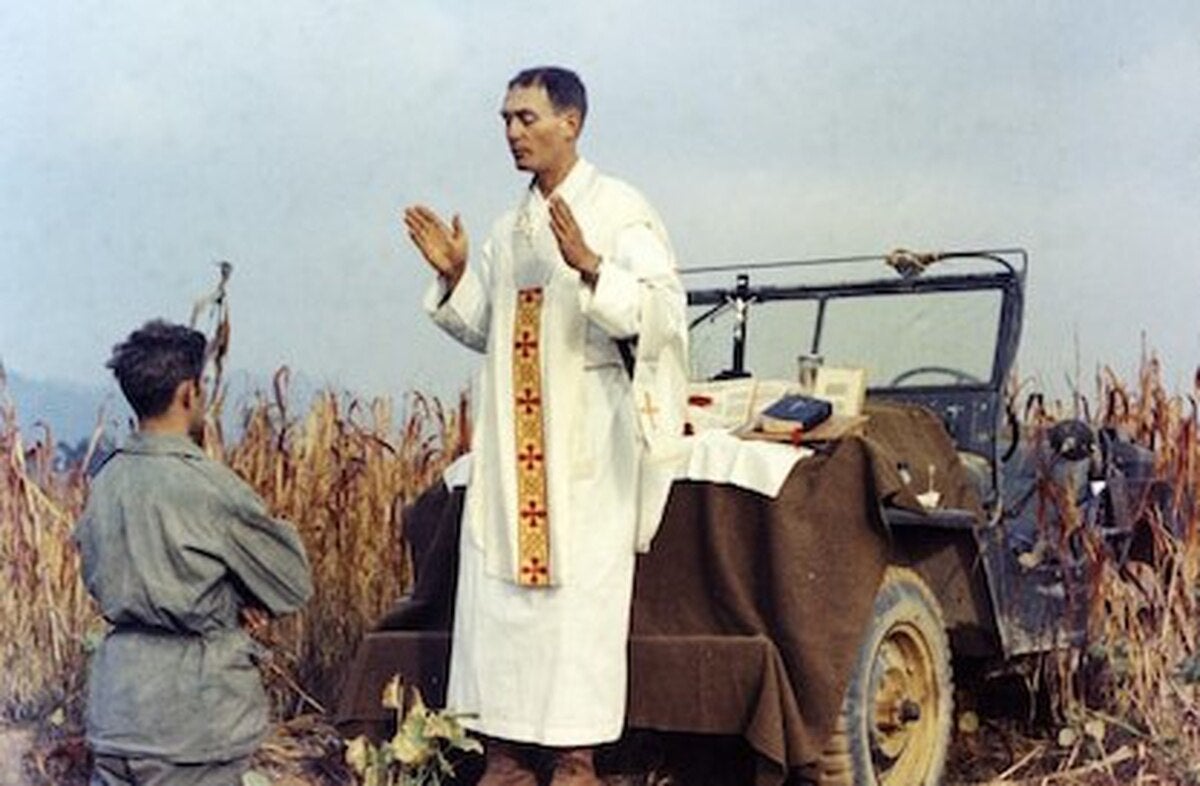 The Army estimates that over 7,500 service members who died during the Korean War remain unidentified to this day. Of those 7,500, 867 are buried as “Unknowns” at the National Cemetery of the Pacific in Hawaii. It is the job of the Defense POW/MIA Accounting Agency to identify these fallen heroes. On March 2, 2021, they identified one very special soldier.

Chaplain (Capt.) Emil J. Kapaun was a member of the 3rd Battalion, 8th Cavalry Regiment, 1st Cavalry Division. His unit was one of the first to cross the border into North Korea during the Korean War. On November 1, 1950, Kapaun and his comrades were attacked by Chinese Communist Forces near Unsan. Though the troopers fought bravely, the Chinese soldiers outnumbered them. As the surrounded Americans fought bravely, Kapaun made his way across the lines to provide medical aid to the wounded and last rites to the dying. 3-8’s command ordered a retreat, but Kapaun refused to leave any soldiers behind.

Hand-to-hand combat ensued as the Chinese forces overran the Americans who stayed behind. Kapaun spotted a wounded Chinese officer and negotiated with him for the safe surrender of the survivors. He was taken prisoner with more than a dozen other soldiers. As the Americans were marched away from the battlefield, Kapaun spotted a Chinese soldier standing over a wounded American, ready to execute him. Kapaun pushed the Chinese soldier aside, picked up the wounded soldier, and carried him.

Kapaun and the other POWs were taken to the Old Pyoktong prison camp on the Yalu River’s south bank in North Korea. The chaplain continued to care for his fellow soldiers. He stole food for them, said mass in the camp, and shared the clothes off his own back to keep them warm during the freezing Korean winter. On May 23, 1951, Kapain died in captivity of exhaustion and possible heart failure.

Though he never made it back to America during his life, Kapaun’s bravery and dedication to his fellow soldiers has earned recognition. His story was brought to the attention of the Vatican and Pope John Paul II declared him a Servant of God, the first step toward sainthood, in 1993. The Father Kapaun Guild continues to lobby for his canonization. In November 2015, the Catholic Church began the lengthy review of more than 8,000 pages of documentation in support of Kapaun’s sainthood.

On April 11, 2013, President Obama posthumously awarded Kapaun the Medal of Honor. “This is the valor we honor today: An American soldier who didn’t fire a gun, but who wielded the mightiest weapon of all – a love so pure that he was willing to die so they might live,” the President said. Remember the wounded soldier that Kapaun saved from a Chinese soldier and carried to safety? His name is Sgt. First Class Herbert Miller. 63 years after that event, Miller was in attendance at Kapaun’s Medal of Honor ceremony at the White House.

Chaplain (Capt.) Kapaun’s story is one of service, sacrifice, and dedication. His identification reaffirms the Army’s commitment in the Soldier’s Creed to never leave a fallen comrade. DPAA continues to work tirelessly to identify every single unknown casualty and honor them with the respect that they deserve.