Legendary paratrooper, WWII and Vietnam vet 'Rock' Merritt dead at 97 - We Are The Mighty 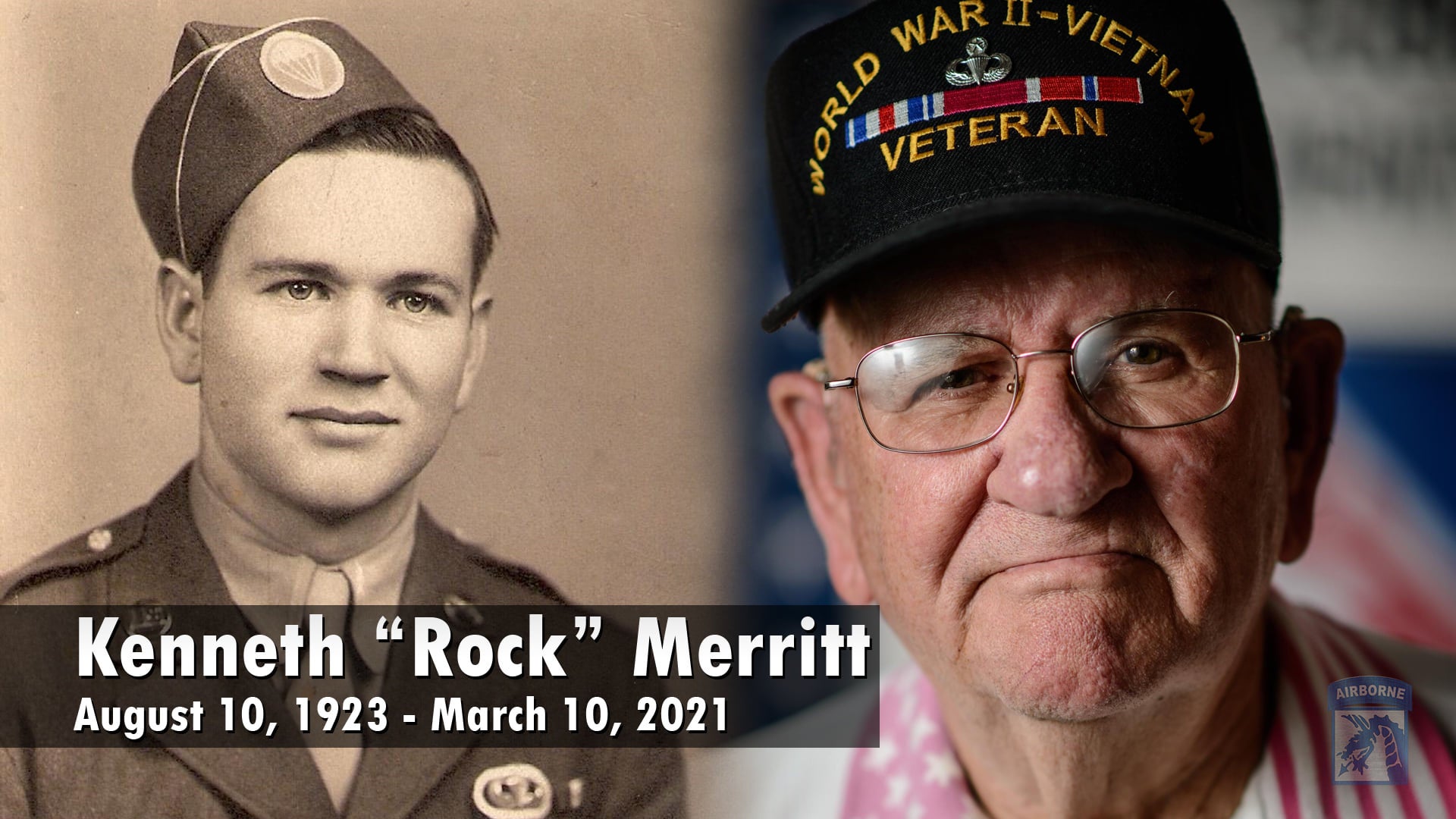 The shoulder sleeve insignia of the 82nd Airborne Division is two As for their nickname All-American. Command Sgt. Major Kenneth ‘Rock’ Merritt was that and more. He served in the Army for 35 years and saw heavy combat during WWII and the Vietnam War.

Merritt was born in Oklahoma in 1923. At the age of 17, he began his service in the Civilian Conservation Corps to help support his family. However, he was discharged following the attack on Pearl Harbor. He supported the war effort helping to construct Camp Gruber in Oklahoma and Camp Hale in Colorado, and worked at a naval shipyard in California.

Looking to get on the frontlines, Merritt went to enlist in the Marine Corps. However, while he was waiting to speak with a Marine recruiter, an Army poster caught his attention. It depicted a soldier descending under a parachute and holding a machine gun. The poster’s caption asked, “Are you man enough to fill these boots?” That was all the motivation Merritt needed to become a paratrooper.

Merritt enlisted in the Army at Fort Sill, Oklahoma on October 15, 1942 at the age of 19. Five days later, he was sent to Camp Blanding, Florida to join the newly formed 508th Parachute Infantry Regiment of the 82nd Airborne Division. He attended paratrooper school at Fort Benning, Georgia in February 1943. After earning his silver wings, Merritt and the rest of the 508th shipped out to the war in Europe.

Merritt jumped into Normandy on D-Day, June 6, 1944. He earned a Silver Star for disabling a German machine gun nest at Hill 131 near La Cuiroterie on July 3, 1944. The medal was presented to him by General Matthew Ridgway. Merritt went on to fight during Operation Market Garden and the Battle of Bulge, after which he went home on leave. He returned to Europe just a few days before the German surrender.

Merritt continued to serve in the Army and rose to the rank of Sergeant Major and was nominated for Command Sgt. Major positions in 1963, 1970, and 1973. Army regulations normally force soldiers to retire after 30 years of service. However, Merritt was one of five Command Sergeants Major allowed to serve an additional five years beyond this mandate. He is also the only soldier to serve two tours as the Command Sergeant Major of the XVIII Airborne Corps.

By the time he retired in 1977, Merritt had built an impressive career. In addition to his Command Sergeant Major positions and Silver Star, he earned a Legion of Merit and three Bronze Stars. He also earned a Master Parachutist with two combat stars. Merritt completed 200 parachute jumps and was awarded a Gold Century Parachute Badge by the Original Airborne Association.

Following his retirement, Merritt remained tied to the Army community. He stayed in Fayetteville, North Carolina and was active with veterans associations like the 508th PIR Association of which he served five terms as President. In 2016, he served as the Grand Marshall for the Fayetteville Veterans Day Parade.

Merritt passed away on March 10, 2021 in his home with his daughter by his side. “We certainly know Rock did his duty here on Earth, not only in WWII and Vietnam, but also in his service to our Soldiers on Fort Bragg,” Fort Bragg and XVIII Airborne Corps said. “For many, his investment in our Soldiers will serve as his legacy. Every change-of-command, every All American Week, every big event, Rock was there. He met every Paratrooper, he shook every Soldier’s hand. He will be deeply missed.”