Retrograde: The gritty, true story of the US departure from Afghanistan 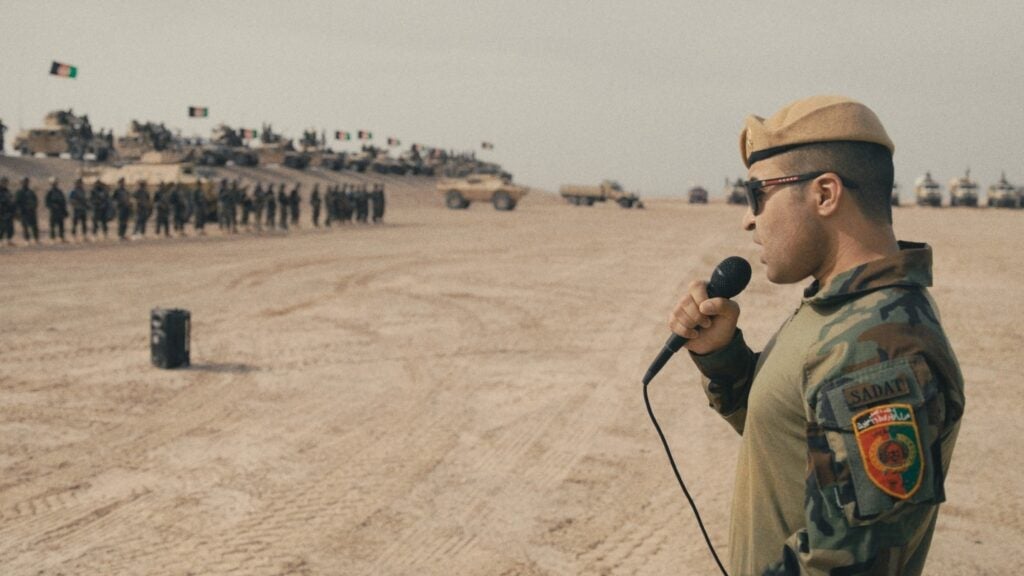 Retrograde captures the final nine months of America’s 20-year war in Afghanistan from multiple perspectives: one of the last U.S. Special Forces units deployed there, a young Afghan general and his corps fighting to defend their homeland against all odds, and the civilians desperately attempting to flee as the country collapses and the Taliban take over. From rarely seen operational control rooms to the frontlines of battle to the chaotic Kabul airport during the final U.S. withdrawal, Oscar-nominated and Emmy Award-winning filmmaker Matthew Heineman’s latest film offers a cinematic and historic window onto the end of America’s longest war, and the costs endured for those most intimately involved.

The beautiful and hard-hitting film is directed by the masterful Matthew Heineman, known for his excellent work with Cartel Land, A Private War, The First Wave and many more. Heineman brings sensitivity, honesty and a sense of style to his directing, which makes Retrograde engaging from start to finish. He has been nominated for Academy Awards and has won numerous Emmys for his films. Like a supernova, his directorial vision and light shine on the subject matter.

Caitlin McNally deftly led the producing side of the film and her craft shows throughout the impactful narrative of the piece. She is an award-winning documentary filmmaker and journalist who has worked for National Geographic, PBS, Netflix, HBO and many more outlets. Her recent work with Chain of Command is worth watching, as well. The executive producer is Baktash Ahadi, a native Afghan, whose family fled the country during the Soviet War and eventually found asylum in the United States. Ahadi served as a combat interpreter in Afghanistan for the Marines and has since produced, translated and contributed to Frame by Frame, Afghanistan by Choice, With This Breath I Fly and Muslim in Trump’s America, which have been shown at top-level festivals around the word.

We start with an embedded Green Beret team working alongside the Lt. Gen. Sami Sadat of the 215th Corps in the Helmand province. Sadat relates well with his Special Forces counterparts and we get a strong sense of the camaraderie between the Afghan National Army (ANA) troops and the US Soldiers. Sadat is the leader of the ANA special forces as well. The order comes down from President Biden that the United States is going to withdraw from Afghanistan and will begin to immediately retrograde. This emotionally affects everyone on the ground and we see the worry begin on Sadat’s face and in his actions. The US troops must destroy any gear, ammunition or equipment that cannot be turned over to the ANA. Much useful equipment and ammunition are expended during this period.

We then witness the ANA’s attempt at conducting air strikes without the precision application usually conducted by the US air forces. This leads to many opportunities being missed by ANA against the Taliban, which eventually add up. Issues with equipment and gear we provided the ANA is also shown and how they attempt to make the best of what they’ve got. The film builds up intensity as provinces begin to fall around the country to the Taliban and pressures mount on Sadat. He is one man against the world without the air cover he needs to push back on the oncoming extremist “flood” in his country. The gut punches continue as Sadat’s subordinates express worry, fear and a lack of commitment. Echos of Vietnam are present here too.

Sadat and his team go to Lashkar Gah and the governor’s compound to fight the Taliban head-on in the capital of the Helmand province. We witness the attacks grow closer to the governor’s compound and then they eventually depart as the situation is untenable. We see the beginnings of the desperation of the Afghani people who attempt to board an ANA aircraft loaded with dead ANA soldiers killed in the intense fighting. Lashkar Gah falls and Sadat goes back to Kabul where the President of Afghanistan then flees from the country. Sadat then has to leave as well and he is an exile in the United Kingdom. We witness further harshness and chaos as people rush to the Kabul airport in an attempt to escape from the Taliban and their wraith. People are turned away with crying children and fear in their eyes. They know what is coming, especially if they helped the U.S. Forces. Again, Vietnam’s shadows are along the walls as similar allies of ours were left behind and met a violent end to their fate.

As a Marine veteran of Afghanistan, this film kept me glued to the screen and emotionally engaged throughout. It does the situation justice beyond measure and it took me back to Helmand province in 2011 during my deployment there many times in the course of viewing. I could almost smell Afghanistan again. What the ANA was up against was eerily similar to what US Forces fought against during the “the surge” of troops sent into the country from 2009 to 2011. It reminded me of people I knew that did not come home and those that are still fighting to escape the country now. The cinematography is amazing as it is tragic as it shows in eye-popping detail the moment-by-moment drama that Sadat and his fellow country people live. The handheld work makes you feel like you are really there and even may fool you into thinking you are watching a feature film in certain ways.

Retrograde has my rating of four out of four red star clusters. If you have served in Afghanistan, you must see this film — if you can tolerate the immense losses in so many parts of the war and the tragic narrative which we know will come to pass. The experience of watching it to me is similar to Apollo 13, 13 Hours or Titanic as we know what will happen but we still watch it — because it is so real. It provides some closure for me in knowing that Afghanistan did have leaders, like Sadat, who fought the best to win and are still planning to go back to fight the Taliban again. There are still wounds open as to why we went, what will Sadat do next and what will be our next military chapter in the world’s history.

Following the November 2022 theatrical release, Retrograde will premiere on National Geographic Channel on December 8, 2022 before becoming available to stream on Disney+ and Hulu in the following days.