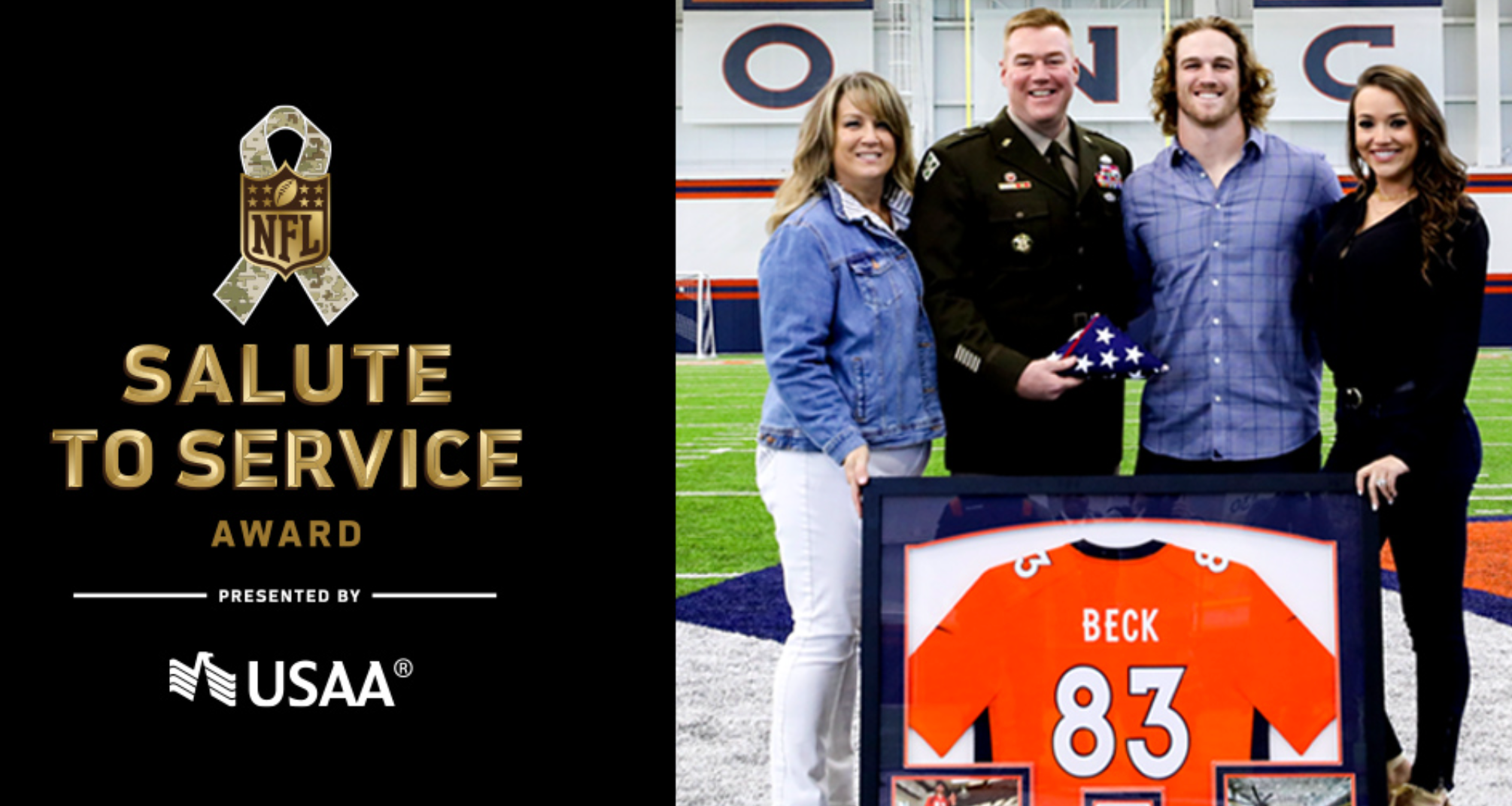 Beck’s commitment to supporting U.S. service members, veterans and their families to be recognized at NFL Honors

Beck will be recognized at NFL Honors, a two-hour primetime awards special that will air live Thursday, February 10 at 9:00 PM ET on ABC from YouTube Theater at Hollywood Park in Los Angeles. USAA, a leading provider of insurance and other financial services to U.S. military members, veterans and their families, will contribute $25,000 in Beck’s honor to the official aid societies representing each of the military branches. The NFL Foundation will match USAA’s donation of $25,000, which will be donated to Beck’s military charity of choice.  Beck will also receive a specially designed military challenge coin, recognizing his commitment to the military. In what has become a long-standing tradition, challenge coins are presented to members of the military community to encourage excellence, boost morale or to recognize a fellow brother- or sister-in-arms.

“Coming from a military family thanks to his father’s service, Andrew Beck definitely knows that the military community needs our support, and he has admirably used his platform as an NFL player to give back to his fellow military families and those who choose to wear the uniform,” said  Vice Admiral (Ret.) JOHN BIRD, USAA Senior Vice President of Military Affairs. “We thank Andrew for continuing to serve all those who serve and are pleased to honor him as the recipient of this year’s ‘Salute to Service Award presented by USAA.’”

Beck, who comes from a military family due to his father’s current service in the U.S. Army as a Brigadier General, knows firsthand some of the sacrifices made by our military community. While volunteering at a Salute to Service PLAY 60 Clinic in 2019, Beck learned that kids drove from Fort Carson Army Base in Colorado Springs. Beck’s face immediately lit up, as he had played high school football in the area while his dad was stationed at the same base.

Despite cancellations, protocols and restrictions, Beck refused to let the pandemic impact his commitment to support the military. In November of 2020, he assembled Salute to Service care packages for military bases across Colorado and helped host a virtual visit with Wounded Warrior Project veterans. In the 2021 offseason, Beck participated in a virtual visit with Buckley Space Force Base and USO Colorado to celebrate WingMan Week, a program dedicated to strengthening connection, relaxation, and the rejuvenation of the fighting spirit. He also partnered with Freedom Service Dogs of America on multiple initiatives, including highlighting the organization on his cleats for My Cause My Cleats.

“To win this award means so much to me. Working with the military and giving back to them is something I’m passionate about. I grew up in a military family, so I know the things that they go through,” Denver Broncos Fullback/Tight End ANDREW BECK. “My dad [who is in the military] is such a big role model to me. This will be a memory I cherish for the rest of my life.”

This season, NFL clubs nominated coaches, active and retired players, and team executives and personnel, who best demonstrated support for the military community. The nominees were publicly announced in November and the submissions were evaluated by a panel of judges, including last year’s award recipient, Atlanta Falcons/AMB Sports and Entertainment CEO STEVE CANNON. Nominees’ credentials are evaluated based on the positive effect of the individual’s efforts on the military community, the type of service conducted, the thoroughness of the program and level of commitment.

The panel of judges, consisting of representatives from the U.S. military, the NFL and USAA, includes:

Since 2011, USAA has used its sponsorship to honor and appreciate active-duty military, veterans and their families by creating unique opportunities that bring the military community and the NFL closer together.

Below is the list of previous Salute to Service Award recipients: