4 helmets that America copied from other countries 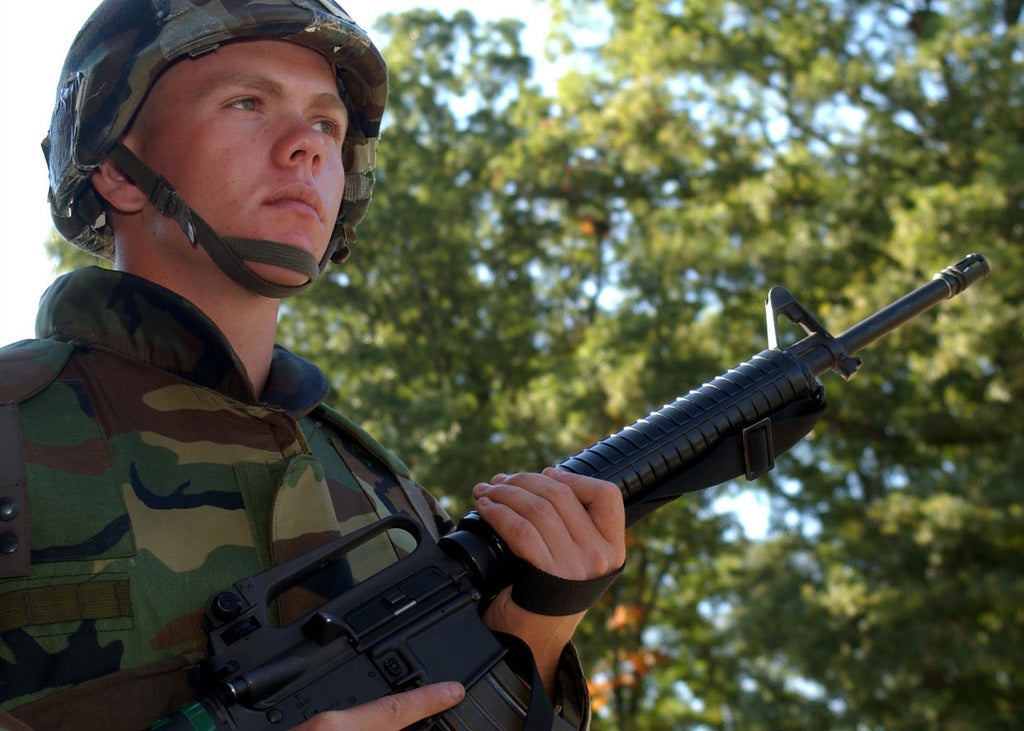 In full gear with helmet and flack vest, Airman (AMN) Thomas Deakins, USAF, 89th Security Forces Squadron (SFS) stands, with a Colt 5.56 mm M16A2 rifle, guard at the main entrance into Andrews Air Force Base, Maryland. The action is part of the Threat Con implementation due to recent terrorist attack at the Pentagon.

The history of the modern military helmet is relatively short in the grand scheme of military history. Prior to WWI, soldiers generally wore soft uniform headwear in combat. In some instances, leather caps or helmets were worn to offer some protection against sword strikes. However, it was the French who first fielded a steel skull-cap to be wore under their traditional headwear. This idea evolved into the all-steel Adrian helmet. Britain followed suit with the Brodie helmet, as did the Germans with the Stahlhelm. Interestingly, American soldiers have worn some form of all three helmets and one more German helmet that may come as a surprise. Here are a few helmets that America copied over the years.

Officially known as the Personnel Armor System for Ground Troops, PASGT refers to the helmet and vest combination first worn by U.S. troops in 1983. Designed to offer more protection, the PASGT helmet comes down over the wearer’s ears more so than the WWII-era M1 helmet that it replaced. Its design is so reminiscent of the German Stahlhelm that troops came to nickname it the Fritz helmet. The PASGT helmet has largely been replaced by smaller and lighter helmets like the Modular Integrated Communications Helmet and the Future Assault Shell Technology Helmet. However, it still sees limited use with the Army Reserves (especially ROTC) and the Navy.

This soup dish-style helmet is synonymous with WWI doughboys and WWI in general. When America entered the war, the other nations were already equipping their troops with steel helmets to protect them from bullets and shrapnel. The wool or felt campaign hats that U.S. troops wore were more suited for the American frontier than the trenches of western Europe. As a result, America began production of the M1917 helmet modeled after the British Brodie helmet. However, troops who had already arrived in Europe acquired genuine Brodie helmets from British supply points until American production and logistics caught up. While the M1917 and Brodie helmets appear very similar, a few characteristics like the chinstrap ball, construction material and paint were slightly different. America ended up purchasing roughly 400,000 Brodie helmets from the British and produced over 2,700,000 M1917 helmets by the war’s end. At the outbreak of WWII, the U.S. military switched over from the M1917 to the now iconic M1 helmet. When U.S. soldiers captured in the Philippines at the start of the war were finally liberated, they thought they were being rescued by Germans because they hadn’t seen the new M1 helmets which looked more like the Stahlhelm than the M1917 they were used to.

This is more of a stop-gap than a copy. As previously mentioned, America did not have a steel helmet for its troops upon entering the war. American volunteer ambulance drivers that arrived in France before America’s official entry were equipped with the French Adrian helmet. The next Americans to wear the Adrian helmet were American units like the 369th Harlem Hellfighters that were assigned to the French Army. These troops would either maintain the interchangeable French insignia that the helmet came with or remove it entirely. Over the course of American involvement in the war, American insignias were cast in bronze for U.S. troops to more easily identify themselves in the trenches. Moreover, many American officers preferred the Adrian helmet to the Brodie helmet and were photographed wearing them on the frontlines.

This helmet actually predates WWI. First adopted by Prussia in 1842, the Pickelhaube is also known as the spike helmet for obvious reasons. Originally made of leather, the helmet’s design was meant to help deflect sword strikes to the wearer’s head. Before the adoption of the Stahlhelm, German forces wore leather and later steel Pickelhaubes. However, before WWI, the Pickelhaube was synonymous with Imperial Germany. An undisputed world superpower at the time, many armies modeled their uniforms after them, including America. While the Pickelhaube was not part of the combat uniform, both the U.S. Army and Marine Corps adopted the spiked helmet in their dress uniforms from 1881 to 1902. It’s probably best that we did away with these. Imagine the barracks fights that would erupt if troops were still issued spiked helmets.