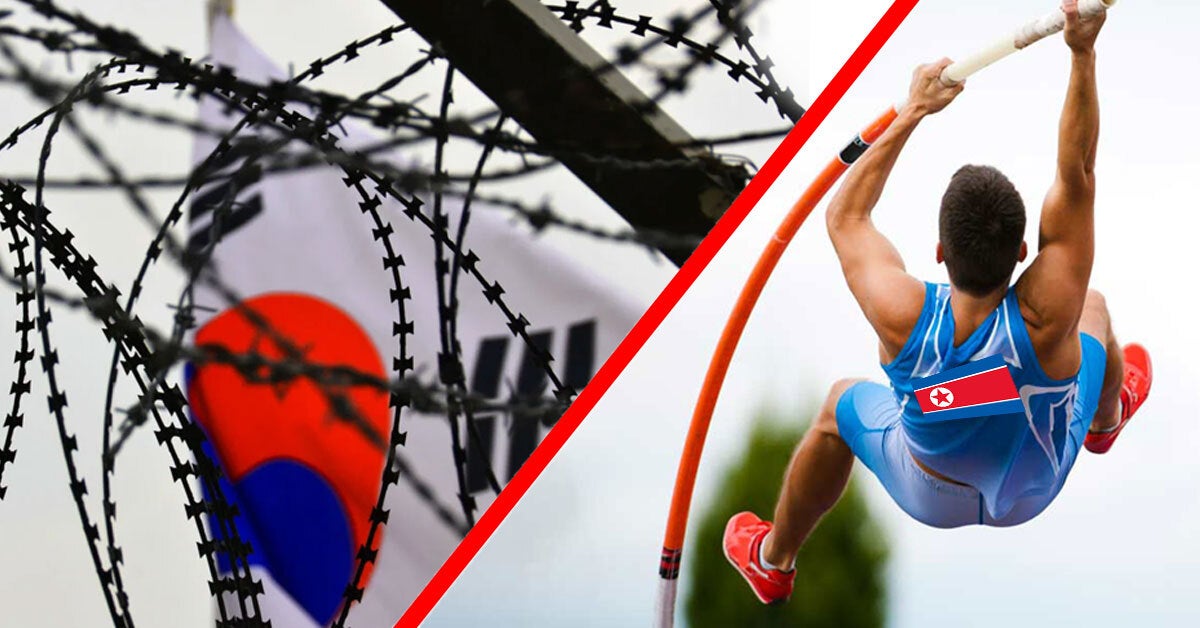 Just in time for Thanksgiving, WATM brings you breaking news to remind you to to feel especially grateful: North Korea is the worst. Sure, America might have super high COVID rates and a little election chaos, but at least you don’t feel the need to defect by vaulting a 12′ barbed wire fence to your freedom. That’s right, a North Korean gymnast mustered all of his talent and courage combined with a healthy amount of desperation and hope, and vaulted a border wall into South Korea to seek asylum.

According to the Chosun Ilibo, the 20-something man climbed an iron pole and used the height to jump over the border fence. He was then spotted about a mile south of the border by South Korean forces using a thermal observation device. The man was promptly detained, identified himself as a former gymnast and reportedly requested political asylum.

Officials were so taken aback by his feat that they asked him to demonstrate twice how he was able to jump over the three-meter fence, according to the BBC’s Seoul correspondent. Authorities vowed to investigate why hi-tech security systems did not work.

According to the London Telegraph, “the audacious defection sparked alarm that the high security demilitarized zone, separating North from South, had been successfully crossed. The four-kilometre-wide, 250-kilometre-long strip is fortified by fences, minefields and armed sentry posts. Few defectors take the dangerous option of trying to break through, with most of the 33,000 who have fled North Korea since the ’90s opting for risky but more achievable routes through China.”

1. North Korea ranks 51st in population, but has one of the largest standing militaries

CIA data ranks North Korea’s estimated 25 million-person population 51st out of the world’s nations. North Korea’s outsized military is among the most powerful in the world, boasting approximately 1,190,000 active-duty troops, according to Newsweek.

China, the world’s leader in both population (over 1.3 billion) and military size (2.3 million), has a military that employs about 0.18% of the population.

North Korea’s military, on the other hand, employs about 4.7% of the total population.

CIA data ranks North Korea’s estimated 25 million-person population 51st out of the world’s nations. North Korea’s outsized military is among the most powerful in the world, boasting approximately 1,190,000 active-duty troops, according to Newsweek.

China, the world’s leader in both population (over 1.3 billion) and military size (2.3 million), has a military that employs about 0.18% of the population.

North Korea’s military, on the other hand, employs about 4.7% of the total population.

According to National Geographic photographer David Guttenfelder, rollerblading is popular “all over the country.” He reported that he couldn’t “count the number of rollerblading locations there are in the capital city [Pyongyang],” in particular.

3. Drugs are common and largely unregulated

Drug use in North Korea is largely unregulated and quite common, with an estimated 30% of North Koreans using drugs, UPI reports. Known locally as yeoksam, marijuana is grown in such quantity that smugglers sneak it across the border into China for foreign sale, according to Radio Free Asia.

Public Radio International reports that methamphetamines, and specifically highly potent crystal meth, are also common in the DPRK, and though these drugs are not as openly permitted as pot, their use is widespread. Meth is often used less for recreational purposes and more as an appetite suppressant and to help workers toiling away for long hours at farms, factories, and in other trades.

4. North Korea is home to the world’s largest stadium

Not only is the DPRK home to the biggest stadium in the world in terms of seating capacity, but it holds that distinction by a massive margin. The Rungrado 1st of May Stadium (also known as May Day Stadium) has a total capacity of 150,000 people.

It dwarfs the next largest stadium, which is Ann Arbor’s Michigan Stadium, which accommodates 107,600 people. The venue is used for occasional sporting events, but its primary purpose is to host the annual Arirang Festival, a massive affair held each August and September that celebrates North Korean history, culture, and achievements.

Strange as it might seem for a dictatorship to hold elections, North Korean citizens go to the polls every five years. However, the ballots they receive only list one candidate name, for the office of Supreme People’s Assembly deputy in their district, according to The Economist.

The only decision the voters have to make is whether to vote for the sole candidate listed or to vote against them, which involves placing their ballot in a separate box from the positive votes and having their identity noted, which could be considered an act of treason, The Economist reports.

6. North Korea exists in its own time zone

As of August 15th, 2015, North Korea exists in its very own time zone, shifted at least a half-hour apart from any other place on earth, CNN reports. Pyongyang time is GMT+08:30, to be precise, and was adopted in an apparent return to the time the nation used prior to twentieth-century Japanese colonization.

7. For some North Koreans, life is improving

To be clear, for many North Koreans almost every day is a struggle where food shortages, horrid work conditions, and government oppression define life. But for some DPRK citizens, everyday life bears some similarities to the rest of the world, NPR reports.

More and more North Koreans have access to mobile phones, DVD players, and other devices that were virtually unknown less than a generation ago, according to NPR. Recreational opportunities including movie theaters, amusement and water parks, and more are common in Pyongyang and a handful of other population centers, and influence from the wider world increases more with each passing year, NPR reports.