The Navy is decommissioning the USS Bonhomme Richard 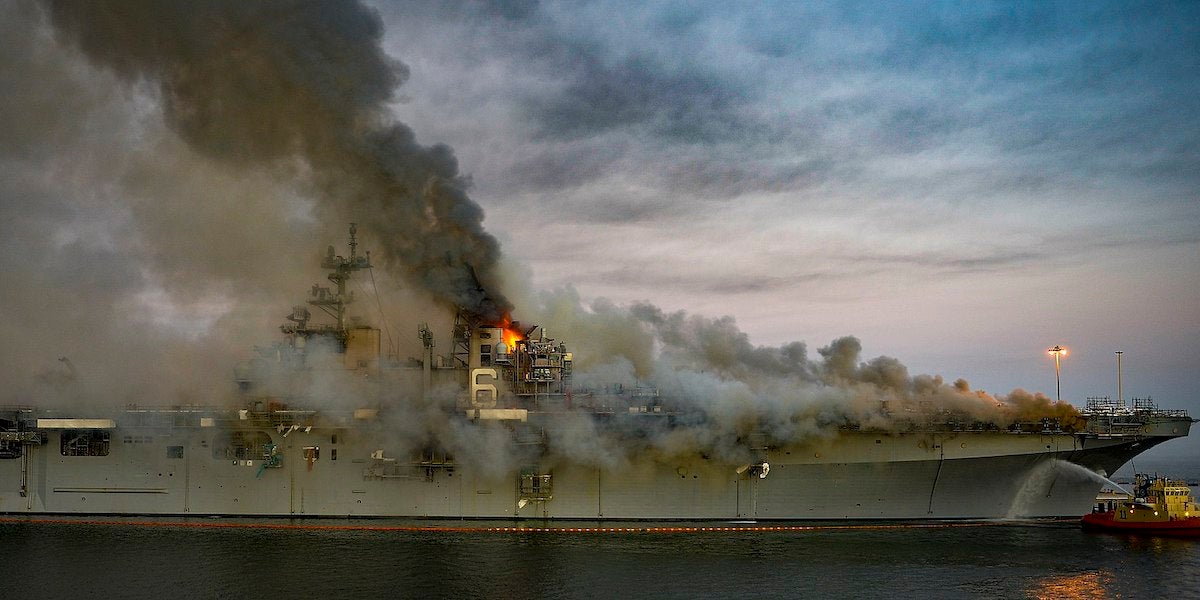 On November 30, 2020, the Navy announced the decision to decommission the USS Bonhomme Richard (LHD-6). The Wasp-class amphibious ship suffered extensive damage during a fire while in port in July. The decision follows an extensive assessment of the ship after the fire.

As a landing helicopter deck amphibious assault ship, the Bonhomme Richard was an integral part of the Navy-Marine Corps team. She was capable of supporting a wide range of aircraft including the SH-60F/HH-60H Seahawk, UH-1Y Venom, CH-53E Super Stallion, AH-1Z Viper, AV-8B Harrier, MV-22B Osprey, and the new F-35B Lightning II. Her well deck also allowed her to support landing craft like LCACs, LCUs and LCMs.

The Bonhomme Richard was commissioned on August 15, 1998. From January 24 to July 24, 2000, she made the first WESTPAC deployment of any U.S. Navy vessel in the new millennium. The next year, she began her participation in the War on Terror with a deployment in support of Operation Enduring Freedom.

Additionally, the ship assisted in humanitarian operations. Following the 2004 Indian Ocean earthquake, the Bonhomme Richard was detached from Operation Iraqi Freedom and sailed for Sri Lanka. The ship helped to airlift relief supplies to Sumatra, Indonesia. Following a port visit to Guam, the ship returned to the Indian Ocean. Helicopters from the Bonhomme Richard flew medical supplies and personnel into Indonesia and evacuated the wounded.

Tragically, a fire broke out on board the ship while in her homeport at San Diego during maintenance. At around 8:50 am, an explosion occurred on the ship. “It is a Class Alpha fire,” said Rear Adm. Philip Sobeck, Expeditionary Strike Group 3 commander, “meaning it was fueled by paper, cloth, rags or other materials in a standard fire.” Despite not being accelerated by fuel or munitions, the fire was extensive. Firefighting effort were delayed because fire-suppression systems had been disabled due to the maintenance.

Finally, on July 16, the Navy announced that all fires on board had been extinguished. A total of 40 sailors and 23 civilians received minor injuries as a result of the fire. The fire was a “very, very serious incident,” said Chief of Naval Operations Adm. Michael Gilday. 11 of the 14 decks sustained fire and water damage. Many sections of deck were warped or bulging and the ship’s island had been gutted by the flames. On July 31, nine sailors assigned to the Bonhomme Richard were meritoriously promoted for their actions in fighting the fire.

Although NCIS and the ATF questioned sailors following the fire, no charges were made and the cause of the fire remains under investigation. The Navy is also conducting investigations into safety standards to prevent future fires.

On November 30, the Navy announced that the Bonhomme Richard would be decommissioned. “We did not come to this decision lightly,” said Secretary of the Navy Kenneth Braithwaite. “Following an extensive material assessment in which various courses of action were considered and evaluated, we came to the conclusion that it is not fiscally responsible to restore her.” In fact, the assessment concluded that it would cost the Navy over $3 billion and take five to seven years to restore the ship. The Navy also considered repurposing the ship. However, the associated costs were estimated to exceed $1 billion, as much or more than the cost of a new purpose-built ship.

At this time, the timeline for towing and dismantling is still being finalized. “Although it saddens me that it is not cost effective to bring her back, I know this ship’s legacy will continue to live on through the brave men and women who fought so hard to save her, as well as the Sailors and Marines who served aboard her during her 22-year history,” Braithwaite said.