MIGHTY 25: Meet Chef Andre Rush, an Army veteran with a heart as big as his biceps - We Are The Mighty

MIGHTY 25: Meet Chef Andre Rush, an Army veteran with a heart as big as his biceps 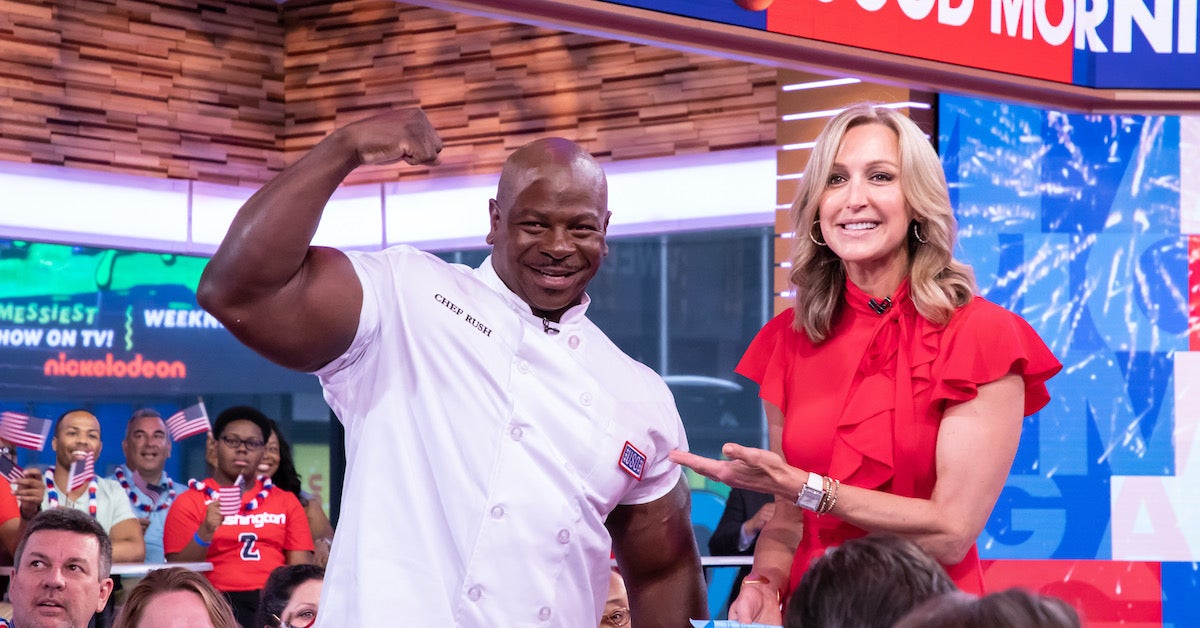 Serving your country and serving others was ingrained into Mississippi native Chef Andre Rush. He is one of eight children, all of whom were encouraged to serve in some capacity. His path of service led him to becoming the ‘strongest chef’ in the United States Army.

“Cooking was a comfort for me, something I did with my mom. But I had to hide it. As a matter of fact, my dad didn’t even know I was a cook until a few years ago,” Rush said with a laugh. He describes his dad as a very intimidating and ‘macho’ guy, but credits him with developing a strong work ethic. “In the South, men didn’t cook. So, I used to sneak and cook with my mom. It gave me such a calm feeling.”

Rush became a master chef – cooking for generals, foreign heads of state and perhaps most impressive, four different presidents. He eventually found himself cooking at the White House, laser-focused on his job. Then, a photo of him cooking on the White House lawn in 2018 changed everything. “I remember that I wanted it to be over with,” he said with a laugh. “When it happened, it was such a whirlwind. I remember avoiding them [the media] the entire time but they kept swarming around me…The reporter came up to me later and said, ‘I’m going to make you famous.’”

The photo seen around the world created a wave of clever memes featuring his 24 inch biceps. Unending requests for Rush to be on various media outlets and even a television series soon followed.

For the humble Army combat veteran, it was the opposite of anything he’d ever experienced in his lifetime. Although he was unbelievably busy, he was trying to go all in and enjoy the ride after he retired from the Army. It was in the middle of this that he received a phone call that his mother was dying. Rush shared that his mother had hidden her illness from him because she knew all the opportunities coming to him and didn’t want to stop him from saying yes.

After her funeral, Rush wanted to take a break to mourn his mother. Then, an old picture went viral – causing a new and even bigger wave of attention. “I got anxiety from it because it was so much. But I had a moment of calmness. I looked up and I said, ‘You did this.’ My mom always said to me, ‘Never give up and keep going.’ So, I kept going,” Rush said with a smile.

Growing up in Mississippi, building his 24 inch biceps and dedication to fitness took ingenuity. There were no gyms around, so Rush spent his time doing pushups and using items laying around for weight lifting. During his time in the military, he came across Arnold Schwarzenegger’s encyclopedia and developed a passion for body building – creating the physique that made him famous. After his cooking photo went viral, he received a call from the big man himself and has collaborated with him on numerous charity works, something Rush is very proud of.

Although Rush has had many offers to be a private chef or work in big restaurants, he has his sights on something more. He’s working on two books, one that will focus on his life growing up in Mississippi and serving in the military. Rush said it will be raw and go deep into his experiences. He’s also working on two television series, and if that wasn’t enough, he founded a nonprofit focused on suicide prevention, an issue he is extremely passionate about.

His advocacy around prevention is personal. In 2011, he lost a soldier to suicide. Despite Rush doing everything in his power to mentor and support this soldier, it’s a loss he carries with him everywhere.

Rush has caught some flak from people who have criticized his push up challenges for suicide prevention, but he doesn’t let it bother him. He knows that by using his position of influence in this way, he’s making a difference. Rush shared that he responds to every single message he receives on social media and has talked to hundreds of people struggling with suicidal ideations. He knows that without those push ups, those conversations would never have occurred.

Despite Rush’s continued success, this master chef and Army veteran’s focus remains on serving others in order to make a difference in the world. Rush considers himself to be an advocate for humanity and building communities, above everything else. His advice to those looking to find their way and purpose is simple, “Be kind to one another, be considerate and… be grateful. Humility is everything.”