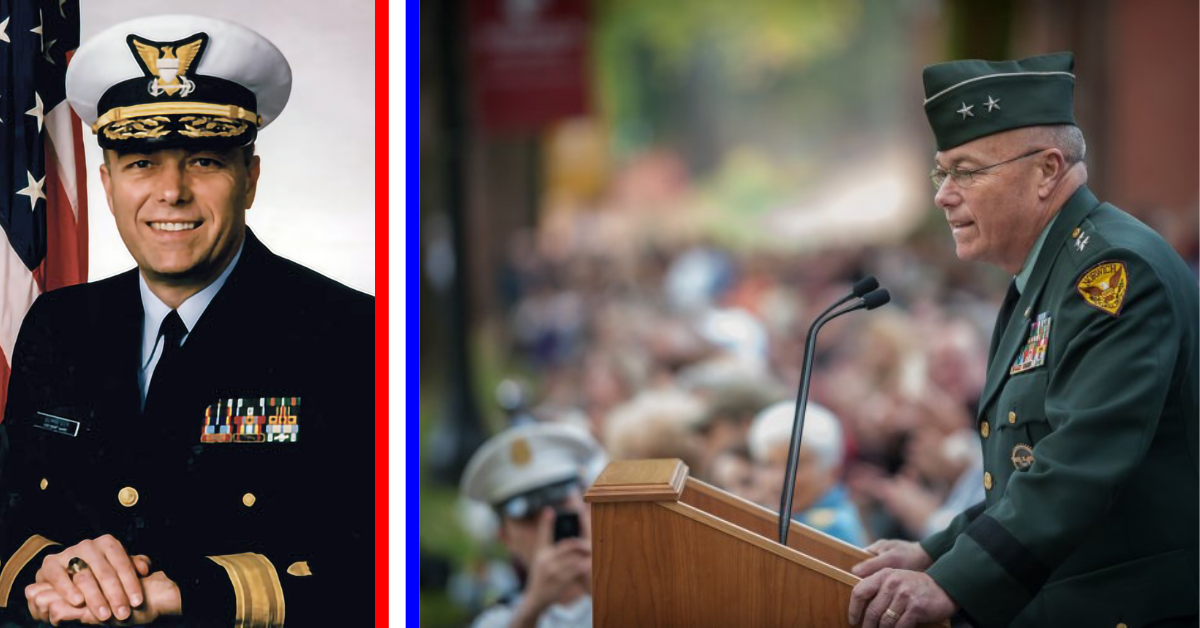 Retired RADM Dr. Richard Schneider began his legacy of service long before graduating from the Coast Guard Academy in 1968. His story begins with a runaway Scottsman with a penchant for the sea.

Schneider’s maternal grandfather, Herbert Johnston, left Scotland at just 14 years old with his brother. After making it to America, he eventually enlisted in the United States Coast Guard. But being a non-rate scrubbing decks and mess-cooking wasn’t for him. His grandfather gave his uniform to his younger brother to finish out the six month commitment.

Johnston worked his way up to captain of a ship in the Merchant Marines. World War I called him back to service. Commanding a Lake Freighter with only one gun aft, he earned a Distinguished Service Medal in 1920 after hitting a submarine. When the war ended, he went home and was married. Schneider shared a story of his grandfather being rescued at one point by the Coast Guard during distress at sea.

It would become a pivotal moment in Schneider’s life.

World War II called his grandfather back, this time as a captain. With his knowledge of the harbors in Scotland, he was put in charge of Navy Operations in Scotland. Johnston was a vital part of the Normandy invasion and took part in the planning alongside the Secretary of the Navy at the time, Adm. Knox.

But it was the story of his grandfather’s rescue which would ultimately influence Schneider’s life, for Johnston made it clear that without the Coast Guard’s timely rescue, Schneider’s mother wouldn’t have been born.

As a 12 year old, it had a profound impact on him. Schneider credits the mentorship he received from educators for much of his life’s success, too. It would be remembered.

“I learned a lot about teamwork and leadership from my high school band teacher, Dr. George. I played snare drum and tympany so I had a lot of time to watch him and how other students responded to him while he was pressing them for excellence and to be the best that they could be. I will always be thankful for the lessons I learned from him,” Schneider explained.

Schneider applied to the Coast Guard Academy and graduated at the top of his class. He too would be called to fight, just like his grandfather. This time, aboard the USCGC Dallas for the Vietnam War.

When he made it back, with several service medals, academia was calling. Schneider earned his master’s and taught until losing his wife at just 40 years old. Left alone to parent four young daughters, Schneider transitioned to the Coast Guard Reserve after eight years of active duty service.

Not long after completing his Ph.D, in 1992, Norwich University asked him to serve as their president, a position he held for 28 years. As the leader of the private military college known for its Army roots, it was a challenge.

“I did get hate mail for a few years because people thought how could a Coastie run this primarily Army school? I imagine it’s how West Point would feel if the president appointed a Navy Superintendent,” he laughed. “I would always write back, saying thanks for their support of Norwich and that I was sending their letter on to the Chairman of the Board, as I did not appoint myself. After a while it was never a problem as they came to understand how much I loved Norwich.”

The university itself was founded by a West Point graduate and became the birthplace of ROTC. Schneider’s time in the Coast Guard would prepare him to lead the future generations of officers looking to serve in uniform. ​​One lesson in particular stands out. ”Being accountable for my people, equipment and knowing that I had trained my crew to accomplish the mission,” he explained.

Schnieder retired from the Coast Guard Reserve as a RADM in 2006 after 30 years of service. It’s a time he remains grateful for. “I saw many of my Norwich students who for all kinds of reasons wanted to serve as commissioned officers, but simply could not. I am so thankful I was able to attend the Coast Guard Academy and was commissioned. It was a lifetime dream come true for me,” he shared.

While President of Norwich University, Schneider grew its annual enrollment by 62% and raised over $262 million for the school. Schneider also graduated thousands of 1st Lieutenants and Ensigns who went on to defend and serve.

After a lifetime of educating and serving America faithfully, Schneider retired in 2020.

Despite his retirement, things aren’t slowing down too much. “I am privileged to be a Coast Guard Academy Trustee and just became a Trustee of the National Coast Guard Museum. We are the only military service without a museum to teach America what our Coast Guard men and women have done serving the nation. Right now, I am also painting my house,” Schneider said with a smile.

In early 2021, the Pritzker Military Museum and Library announced Schneider would be the recipient of the Citizen Soldier Award. According to the organization, The Citizen Soldier Award stands to honor a person who exemplifies the traditions of the citizen soldier set by George Washington; a person who served the nation as a leader in war and in peace, for the betterment of the common good.

Schneider embodies all of those qualities and more. It’s what makes him one of the Mighty 25 – today and always.