MIGHTY 25: Meet Curtez Riggs, who turned an idea into a global movement - We Are The Mighty

MIGHTY 25: Meet Curtez Riggs, who turned an idea into a global movement 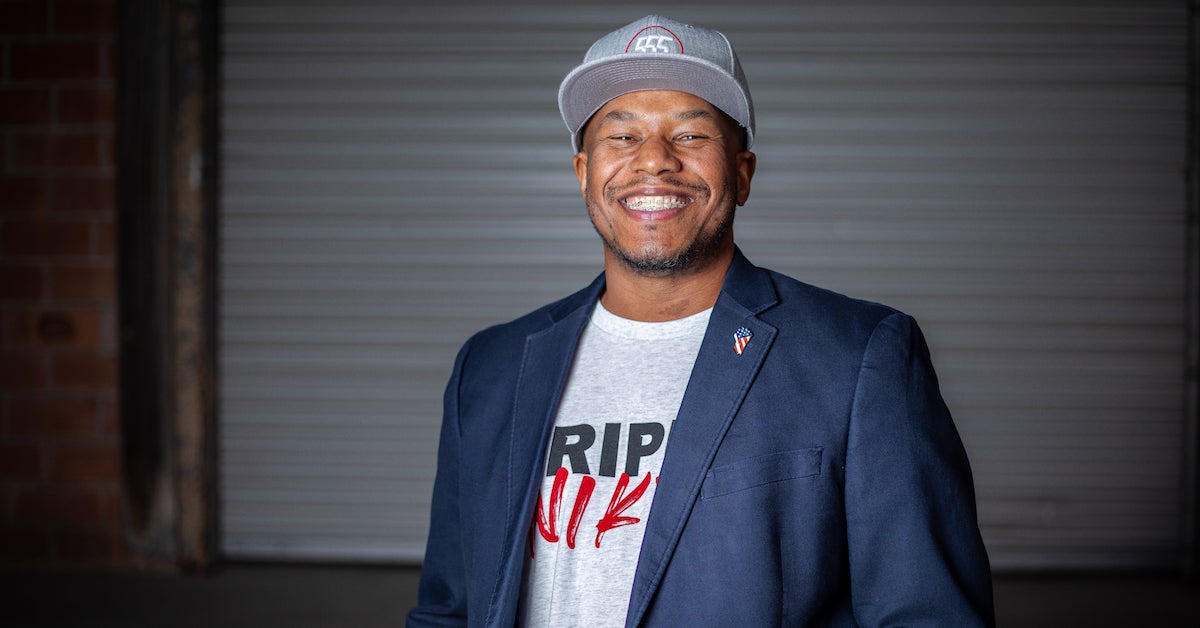 Army and service disabled veteran Curtez Riggs is making waves in the veteran entrepreneurial space. He aspires to help others to find their passion and purpose in it, too.

Riggs was always a scrappy kid. Growing up in Flint, Michigan he knew he’d have to work hard to make it. He was raised in a two bedroom home that housed six of his family members. “I didn’t have a lot, $20 meant a lot to us growing up,” he said. He started his entrepreneurial journey by picking up used bottles and turning them back into stores for cash. Before long, Riggs was doing it from his couch, running a team of pre-teens to do the heavy lifting while he managed the business. When he got older and got his first job, he passed the torch to his little brother to run.

Surrounded by blue-collar workers, college was never really on his radar. As the factories and shop work started to shut down, he knew he’d have to do something. Watching his family struggling or going into questionable activities, he wanted more for his own life. So, he graduated high school early and joined the Army. “I graduated in January and shipped out in February. To be honest – I’ve never looked back,” Riggs shared.

Although he knows that his values and character were well-established by his upbringing, Riggs recognizes that both the streets and the Army created a strong foundation for who he is today. “I grew up in a single parent home. My dad wasn’t around until I was older. The lessons that I learned were from a wide variety of people… some I shouldn’t have been around,” he explained. “So, for the first time in my life I am entered into an environment where everything is structured and disciplined. It’s the first time in my life that I had a sense of purpose. Loyalty, discipline, respect, honor and integrity. Those are the things the Army taught me that affect every decision that I make today.”

Although he knew how to hustle and work hard, he didn’t realize what it was. “I’ve always had the heart and mind of an entrepreneur, I just didn’t know what to call it,” Riggs explained. After going through a tough divorce, he devoted himself to improving his credit score and his life. As he was trying different things, Riggs was exposed to creating content which led to a relationship with USAA.

That relationship with USAA resulted in Riggs cultivating his first conference, although he didn’t realize that’s what it was at the time. “They gave me my very first check, $12,500. I thought I was ballin,” Riggs said with a laugh. “I had successfully sold a brand on an idea that I had. The faith and trust they had in me allowed me to do something small for the community.”

The mix of 80 veterans, active duty, military spouses and civilians that came together at that first event to network struck him as pivotal. The years after that saw tremendous growth in participation, with more than 900 attendees in 2019. “When you talk about entrepreneurship and where it comes from… it has always come from a desire for me to help someone else, and to give back to a community that raised all of us that were essentially lost,” Riggs shared.

The Military Influencer Conference is about relationships, Riggs said. People from all walks of life and communities can come together in a shared mission of service and entrepreneurship. “At the end of the day, it’s an inclusive community where we can connect and grow together,” he said. Although the Military Influencer Conference brand is very successful, it’s not the only thing he remains deeply passionate about.

The racial divide in the country hits home for Riggs. “The color of my skin, right? I am Black, I can’t color my skin anything else,” he shared. But Riggs said that he has what those in the community call a ‘Harvard voice’. He shared a story of talking to a high six figure sponsor on the phone and that everything was going incredible, the sponsor was ready to invest. When they switched to a video call to continue the conversation, things went downhill fast.

“I guess that guy never Googled my name. He kept calling me ‘Curtis,’” he explained. As they switched to video, Riggs’ son came into the room. “The executive introduced himself and I said that it was great to talk to him again. He gave me an odd look and then asked me, ‘When is Curtis going to get on the call?’ My 7 year old son said, ‘Curtis? Who’s Curtis? His name is Curtez.’ The gentleman then realized I wasn’t white; it was clearly shown on his face. The questions went from, ‘How can I invest in your brand,’ to asking me, ‘How did you get the money to afford to do this?’ And, ‘What city are you from?’

Riggs said his son asked him afterward why the gentleman kept asking him all of those questions and eventually, his son told him he shouldn’t do business with him. Then, it clicked. “My 7 year old son realized that this man had a problem with me because of who I am before I did. So, I am very passionate about the health and well-being of people that look like me,” he said.

Riggs discussed the racial unrest and police brutality cases against those who are Black and the impact it has had on him. “If we want to save Black lives we need to elevate Black leaders. We need more positive role models besides athletes. We need more people who have grown from the gutter and gone on to do phenomenal things who can then reach back and help the next generation grow,” he explained. “Our goal by creating this brand is to educate and empower.”

It’s Riggs’ hope that his story and journey will inspire others to dive into their own hopes and dreams. Riggs shared that “no” just means new opportunity and everyone has the power to create their own futures. All they have to do is step forward and do it.