That time a baseball player saved Old Glory from the torch 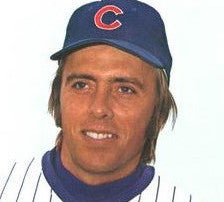 If you were watching Super Bowl LIII, you were probably very interested in the commercials, because the game sure wasn’t of much interest. Maybe you saw an ad for Zaxby’s chicken featuring former NFL center Jeff Saturday and MLB legend Rick Monday.

Long story short, they were ripping on Chick-Fil-A for being closed on Sundays. That’s not important, but this story is.

Rick Monday’s name may not ring a bell for younger NFL and MLB fans, but it’s a guarantee your elders know who he is. Besides being the top prospect for the 1965 MLB draft, playing for the Athletics, Cubs, and Dodgers for 19 seasons and winning a World Series with Los Angeles, Monday is best known for defending the American flag in the middle of a game.

The left-handed center fielder was playing for the Chicago Cubs at the time against the home team LA Dodgers on April 25, 1976. At the bottom of the 4th inning, two strangely dressed hippies made their way onto the baseball field and crouched down in the left center of the outfield.

It was supposed to be an act of protest filmed on live TV. The two men started trying to set an American flag on fire, right there in front of Dodger Stadium, the U.S., and the world. But after the batter in play hit a pop fly, Monday saw what the men were trying to do, ran over to them, and snatched the flag away to thunderous applause.

“If you’re going to burn the flag, don’t do it around me. I’ve been to too many veterans’ hospitals and seen too many broken bodies of guys who tried to protect it,” Monday later said.

Monday had served in the Marine Corps Reserve as part of a service obligation for attending Arizona State University.

The two men were arrested and charged with trespassing. Monday took the lighter fluid-soaked flag over to the opposing dugout. When Rick Monday walked to home plate on his next at bat, he came out of the dugout to a standing ovation from the home team’s fans. The story doesn’t end there.

He received the flag as a gift after it was no longer evidence in a criminal case. It was presented to him at Wrigley Field on May 4th, from the LA Dodgers, and he has kept it throughout the years. These days, he and his wife take the flag on fundraising tours across America to raise money for veteran-related issues.