Was George H.W. Bush almost eaten by cannibals? - We Are The Mighty 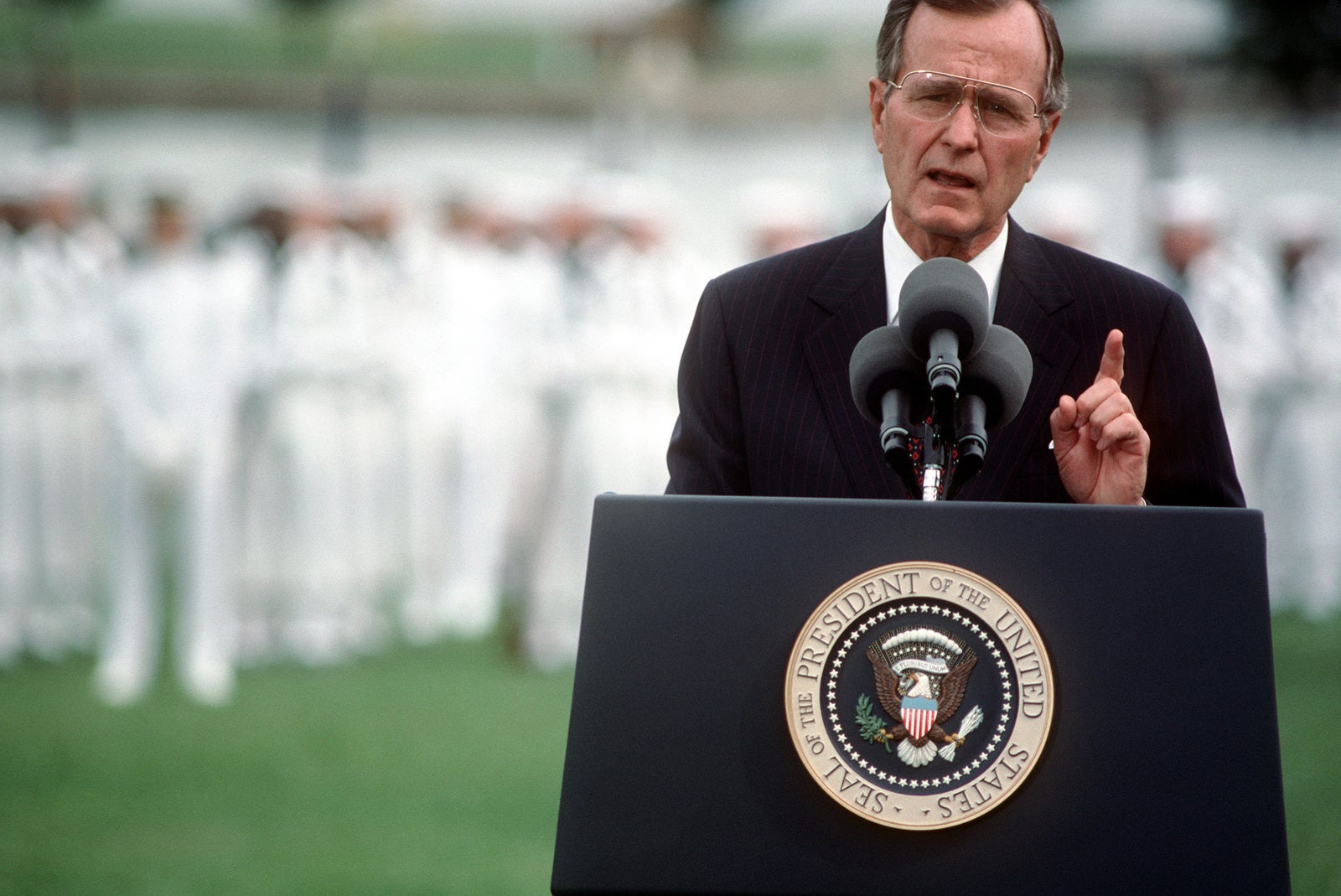 President George H.W. Bush makes a point as he speaks during the retirement ceremony for Admiral William J. Crowe Jr., chairman, Joint Chiefs of Staff. The ceremony is being held at the US Naval Academy in Annapolis.

The 41st President of the U.S., George H.W. Bush, served as Commander in Chief from 1989 until 1993. He also served as Ronald Reagan’s VP from 1981 until 1989. But before his stint in the White House, he had a prolific political career, working in the Texas House of Representatives, as a UN Ambassador, on the Republican National Committee and director of the CIA.

However, Bush got his start in the Navy, where he was almost captured by cannibals after a crash landing.

At just 18 years old, he joined the service, becoming one of their youngest pilots to date. During WWII, he served in the Pacific Theater, flying a Grumman TBF Avenger torpedo bomber. His first combat mission took place in May of 1944 and under the callsign/nickname Skin, Bush went on to fly a total of 58 missions with 128 completed landings.

It was during one of these missions over Japan that our former president had a run-in with a crew of Japanese torturers, an experience which he narrowly escaped.

A downed plane and hungry captors

After an attack on Chichijima, a Japanese base, Bush was able to attack several of his intended targets. Along the way, however, his plane was hit by enemy fire and went down. Others on the plane died in the crash, but he was able to bail out, landing in water. Those in other planes who survived the fall were captured by the Japanese. Meanwhile, Bush found a raft and paddled away from land as an attempt to get away. He was eventually rescued and taken aboard the USS Finback, a submarine. He was spotted by the watchman and pulled aboard, before the vessel went back underwater.

The other survivors were tortured, beheaded or killed by other means, and were partially eaten their captors. It’s reported at of the nine Americans who landed alive, eight were killed, and four had parts of their livers and thighs eaten. The future President Bush was the ninth.

As for the cannibalism, there are a few explanations to this in the 2003 book by James Bradley, Flyboys: A True Story of Courage. In the book, Bradley aligns that consuming the liver is a Japanese tradition, citing the cultural belief of health benefits from consuming human flesh. However, in WWII, cannibalism also became a necessity when food was sparse, with other parts of the body also being consumed. Because only portions of bodies consumed in this case, it’s believed it was ritualistic, but that theory has not been proven.

This event sparked many trials after the end of the war. Thirty Japanese soldiers were sentenced; punishments ranged from prison time to death by hanging. Members were tried for murder and “prevention of honorable burial,” as wartime laws are not worded for instances of cannibalism.

George H.W. after the war

After this near-death experience, the future president is said to have had a type of awakening. He believed something was to come of his life, having been spared from a terrible death.

He later told the press: “Why had I been spared and what did God have in store for me? In my own view, there’s got to be some kind of destiny and I was being spared for something on Earth,” Bush later said. “I think about those guys all the time.”