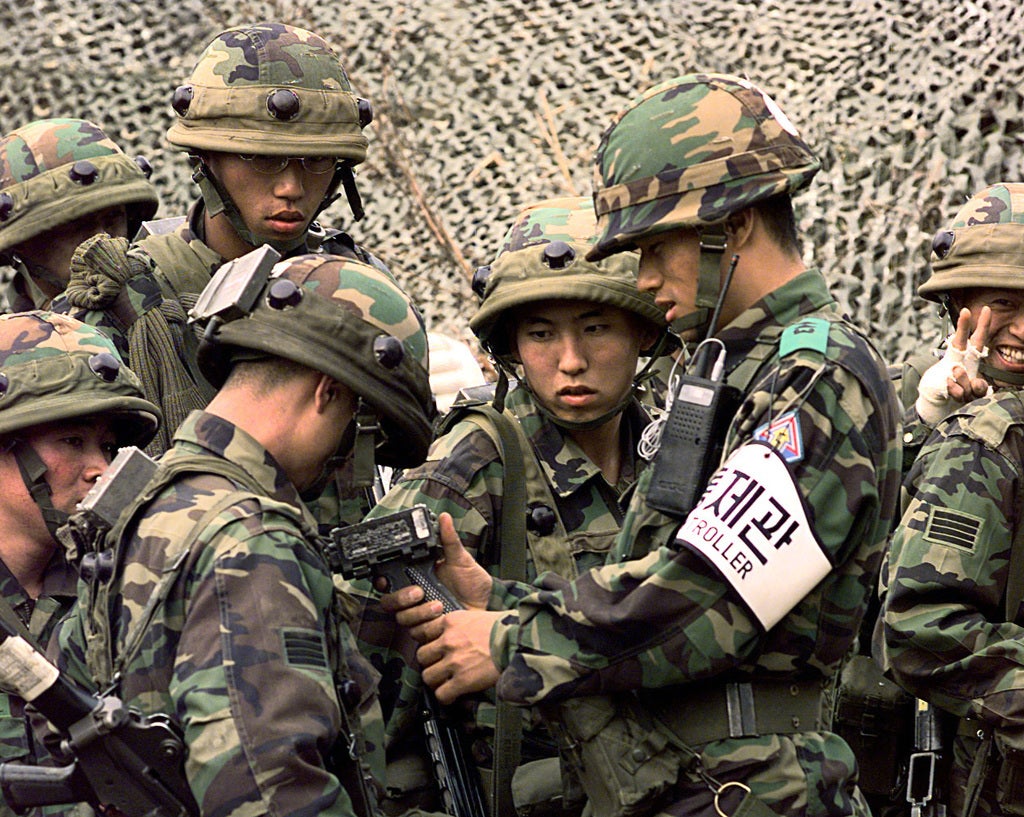 Republic of Korea Army (ROKA) soldiers have their Multiple Integrated Laser Engagement System (MILES) gear tested by a Korean observer/controller at the Twin Bridges training area on Oct. 31, 1998. The ROKA forces will be using MILES for the first time against the 3rd Brigade, 2d Infantry Division from Fort Lewis, Washington, during a simulated battle at Twin Bridges, located 25 minutes west of Tongduch'on, Republic of Korea, on Nov. 2, 1998, during the combined exercise Foal Eagle '98.

In October of 1983, a team of North Koreans bombed the Martyr’s Mausoleum in Yangon, Burma in an attempt to assassinate South Korean President Chun Doo-Hwan. The president survived, but 21 others were killed, including 17 South Koreans and important members of the South Korean government.

Although the South publicly denounced North Korea for its actions in the United Nations, privately, the country vowed revenge and began to train a team of special operators to infiltrate North Korea to inflict biblical retribution.

South Korea, one elderly veteran says, had been training commandos for such missions since the North attempted to assassinate the South’s president at the Blue House in 1968. That mission was called off, but the Republic of Korea trained thousands of secret specialists in case a mission was necessary.

In response to the Yangon Incident, the South Korean military decided to destroy some of North Korea’s most significant landmarks, like the Tower of the Juche Idea and the Pyongyang Central Broadcasting Tower.

Training began immediately after the future commandos were selected. But they weren’t picked from the regular army or even the South Korean Special Forces. They were recruited from the civilian population with the promise of overwhelming sums of money given to them or their families, should they not survive the mission. The South Koreans allegedly preferred to get young single men with no parents for the training.

For basic training, these civilians were forced to run at least 8 miles per hour while carrying 19-pound rucksacks and 3-pound weights on each ankle. The idea was to be able to stay ahead of North Korean special forces once their missions were complete. One trainee remembers his rucksack caused his back to bleed, created a giant blister, and soon turned his back into a giant callous.

The trainees also needed to learn how to charge through barbed wire and iron fences at top speed, search for booby traps and evade them, all so they could make it to the North through the demilitarized zone.

Once in North Korea, the operators would have to survive far from civilization, hiding out in the mountains and evading the Korean People’s Army. To do so, they learned to survive by eating rats and snakes in the south. Once in a major city, however, things could go wrong very fast.

The trainees learned to be North Korean soldiers, use North Korean weapons, and wear North Korean uniforms. Despite successive presidents calling off major retaliation against the North (including the bombings of prominent landmarks after the Yangon Incident), Southerners still made thousands of incursions across the DMZ.

In the days before satellite imaging, the only way to get intelligence and imagery across the border was to actually go there and snap photos. Retaliatory attacks were made, but if the North Koreans cared, they didn’t share it with the world.

Thousands of South Koreans were trained to go north, and thousands went. Thousands also did not return. Those who did were sworn to secrecy. What is known about the infiltrators only comes from the son of one of them, who overheard things his father would talk about while staring into space, drinking a soju.