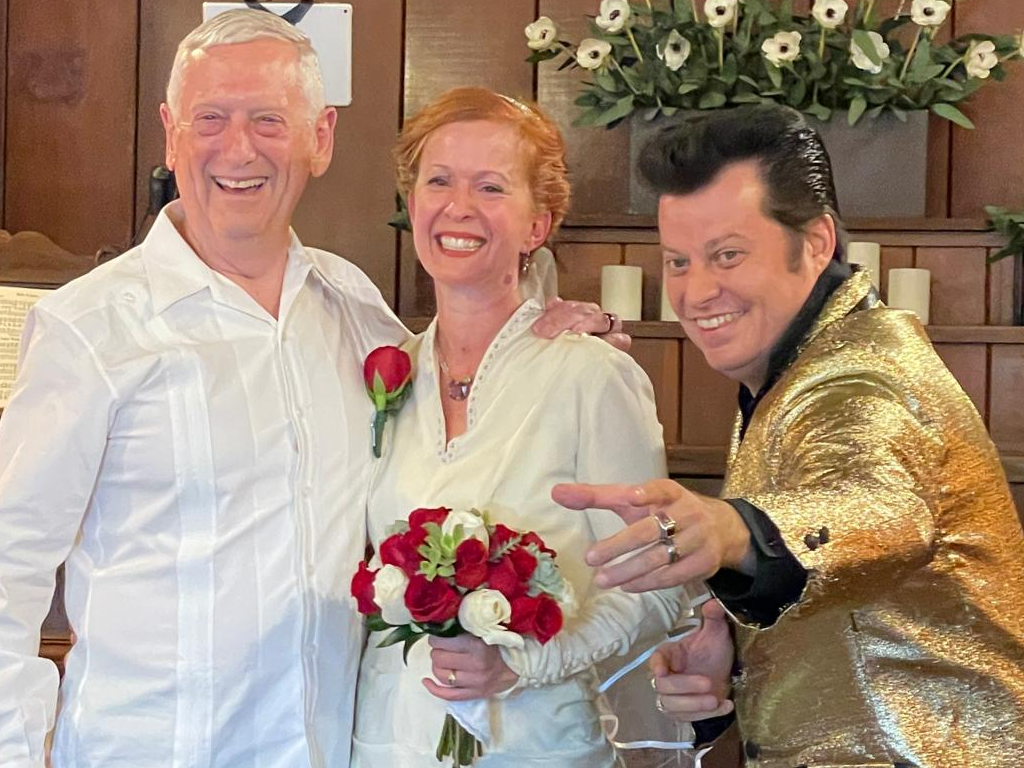 On June 28 2022, a bombshell dropped. The legendary General Mattis (cue Foo Fighters: There goes my hero), the Saint Patron of Chaos, was married…in Las Vegas…by an Elvis impersonator.

To quote General George Armstrong Custer at the Battle of the Little Bighorn in 1876, “I didn’t see that one coming.” Marine veterans around the globe are coming to terms with this monumental event. No one could have forecasted this scenario. The great Warrior-Monk getting married now that his uniformed service is in the rear-view mirror is only minorly shocking. We all want companionship; but Vegas?! Elvis?! This is the kind of stunt Lance Corporals pull off every long weekend. Who would have thought this would come from our old boss, this icon? Listed below are 5 bizarre events that should have happened before General Mattis was married in Las Vegas.

Someone found the keys to the HMMWV

The new guys checking into the Fleet Marine Force (FMF) don’t know that the High Mobility Multipurpose Wheeled Vehicle (aka HMMWV, humvee, or hummer) doesn’t have keys. It’s not intuitive. In the civilian world (from which the Corps takes normal human beings and transforms them into the lightweight, air-cooled, MRE-fed, motivation-operated weapons known as United States Marines) all vehicles have keys. A common prank is to send the new guy in search of keys for the hummer. “PFC Lahr, go see Lance Corporal Ward and ask him where the keys to the humvee are.” The hard-charger then spends half a day on a fool’s errand that cannot be accomplished.

Someone found a box of grid squares

Same scenario but with a different object. To the uninitiated there is no such thing as a physical grid square. It’s not an actual object. Grid squares are imaginary lines on a map that are crucial to executing the military method of land navigation. They are akin to lines of latitude and longitude. When the new guy receives the task “PFC Harris, go to supply and get the squad a box of grid squares,” the Leatherneck takes off with a Message to Garcia attitude intent on accomplishing the mission. The old salt dogs are all in on this caper and most of the day is spent before the “cat is out of the bag.”

Someone found a roll of flight line

Here we go again. This practical joke is more common outside of the Air Wing. In the Wing, the young Marines all know what the flight line is because their work in some way supports it. Back on the good old ground side where crayon munching demands a refined palette and discriminating taste, being sent to fetch “a roll of flight line” is more common. It could be plausible. Maybe it’s some tool the grunts use to guide in the helicopter for extraction from the field (?) We certainly don’t want to hike back. And so it goes, “PFC Hurd, go fetch me a roll of flight line Warrior!” Aye Corporal!

Finding a can of squelch

Yet another practical joke, this antic sends the new guy on another escapade that cannot be accomplished. In radio terms, squelch is the process of muting a channel when there is nothing on it. It results in the constant hiss of white noise which can be annoying. This concept is a familiar one for those in uniform, but for those who are early in their enlistment the term “squelch” just sounds vaguely familiar. Perhaps it is a key ingredient or component to the execution of military secrets known only to those with security clearances and access. “PFC Virges! Get down to the comm shop and grab me a can of squelch!”

Discovering “pit love” is not an actual thing

This one may need a bit of explaining. The Marine Corps takes great pride in the old adage, “Every Marine a Rifleman.” Every recruit must qualify with the service rifle before graduating boot camp and earning the title Marine. They are then required to qualify with the rifle every year, up to a certain rank and time in service. When on the rifle range the detail is split in two. One half shoots, while the other half is in “the pits” or “the butts.” These are the folks that are lined up on a concrete catwalk below the berm, lined up under each target. When the shooter fires onto the paper and cheesecloth targets, those Marines in the pits pull the target down on its steel and chain cage, mark the shot with an opposite black or white spotter, then return the target above the berm.

There is a common, unsanctioned practice of showing some “pit love.” This occurs when a shot is close but not “in the black” and the spotter marks it in the black anyway. In extreme cases, when the shooter is on the border of not qualifying the spotter will show pit love by straight up marking shots in the black to give the shooter the last few points required to qualify. The hope is that when the spotter becomes the shooter on the firing line, he too will receive some pit love. One would have predicted that “pit love” is a myth, and that ALL Marines are superb shooters, before predicting General Mattis getting married in Vegas.

The practical jokes listed above are not incidents of hazing. They are good natured fun at the expense of the new guy and his naivete. As he becomes familiar with the culture, he too sees the irony and humor, albeit at his expense. The zeal and energy he displays in an attempt to execute these tasks is also a bit encouraging, standing in stark contrast to the laissez faire attitude of those who succumb to cynicism in their military service. The optimism of youthfulness is a good thing. There are many other pranks including finding chem light batteries or a tube of elbow grease, but the bottom line is they are not real things (conversely pit love is a real thing). Preposterously, Marines would have predicted all these things coming to pass before our hero, legend, and role model the Former Secretary of Defense (we affectionately called our Secretary of Offense) General James N. Mattis, USMC Retired, being married in Las Vegas by an Elvis impersonator. However, I suppose it is simply one more thing that endears him to Lance Corporals throughout the ages. In many respects he is on another level as a warrior, but in this escapade, well….he is just like us. Semper Fidelis, Sir.

Editor’s note: This article originally misidentified General Mattis’ middle initial as “T.” The article was updated on July 9 with the correct initial of ”N.” and we gave our entire staff a knife hand and a stern look.