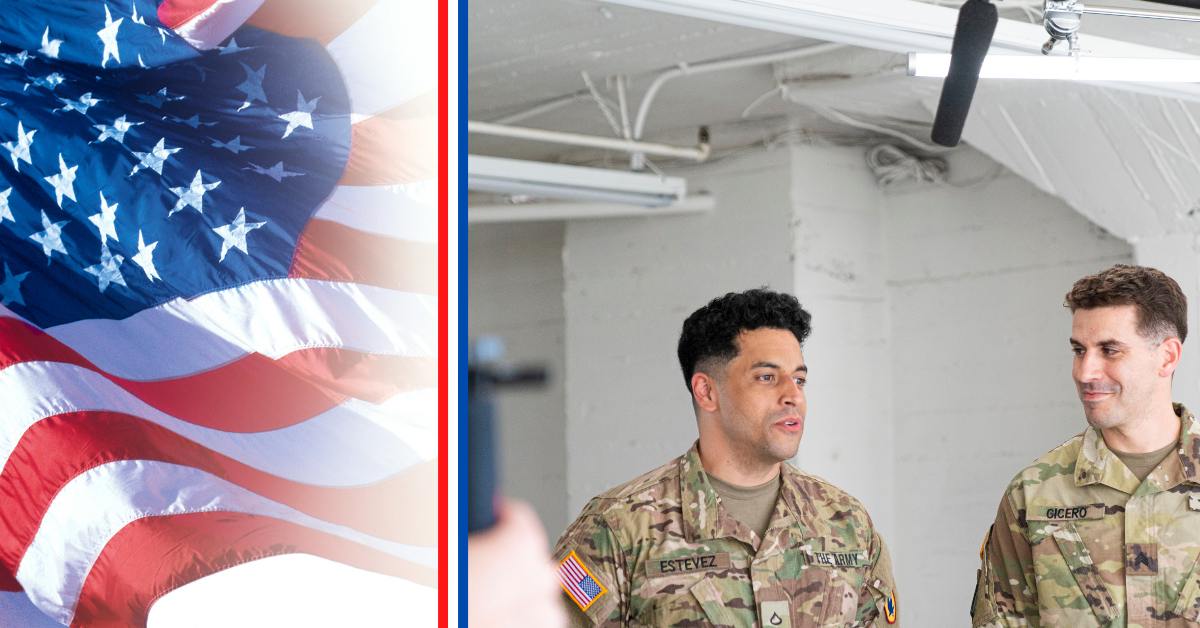 Photos courtesy of Graber and Anthony.

“A Combat Veteran” is known for its sharp wit, unbeatable humor and the very realistic peek it gives behind the military curtain. The two guys behind it all have created an even bigger opportunity to laugh – this time with a play.

Veteran soldiers Andrew “Drew” Anthony Hernandez (known as Drew Anthony) and Juston Graber have been making waves within the Los Angeles acting scene for some time now. Now they’re ready to take it to the road.

“We want to do something different. Bring live theater to the veteran community,” Graber explained. “All of the characters will spark somebody’s nostalgia.”

Though the name of the theater piece is Enlisted, the play also offers an insight to the life of an officer leading enlisted combat troops. Specifically, it’s a comedic look at a unit before, during and after a deployment, with a window into leadership attempting to gain control of its soldiers.

“We did some research to see what was out there. What was done in the past and a lot of the work that’s been published on theater and stage has been more dramatic work, more of a murder happening in the unit, or some kind of some kind of drama,” Anthony shared. “I think this shows people the quirky day to day shenanigans that really happen in the military.”

One of their goals is to bring in civilian audiences along with their military brothers and sisters, showing them the lighter side of military service. It also looks to erase any preconceived notions. “When many civilians see somebody in uniform their mindset goes to some kind of biased political stance,” Graber said. “This play has no politics in it whatsoever. It’s all comedy to bring people together for a night of laughter, enjoyment and entertainment.”

Anthony echoed the sentiment of giving a new view on the military community. “What we’re hoping to do with this play is show a different kind of a light on people. Because the same way with our cast being a mix of veterans and civilians, when you join the military it’s full of people from everywhere that you have to work with. And it’s all to one specific unified mission,” he said. It’s kind of annoying to see that the military just gets painted as one way, it’s a lie. It’s bogus. It’s annoying. And we’re hoping to break that with this play.”

Enlisted was funded through fundraising efforts within the military community. They raised the money in six weeks through the support of about 800 donors. You can see the play at the El Portal Theater in North Hollywood August 5, 6 and 7. The duo hope to bring it nationwide.

“If we’re successful here in Los Angeles, we plan to go to Texas next. We’re still looking at venues but we’re eyeballing San Antonio, Dallas or Fort Worth,” Graber shared.

Both hope their play sparks good conversation, something they feel is lacking. “We really feel like it’s so needed, especially right now with everything going on in our society and country. And it will really humanize the military community,” Anthony added.

The only way you can watch the play is to come in person. Though they’ve been asked to create digital copies for purchase, there are no plans to do so at this time.

“We’re so good at carrying each other and rely a lot on improv through our videos, feeding off of what the other person is saying in A Combat Veteran. This isn’t that, it’s live. There’s no room for errors,” Graber laughed. “I think that’s what makes the performance that much more special.”

To learn more about Enlisted and to grab tickets to their Hollywood premier, click here.