America named four tanks after General George S. Patton - We Are The Mighty 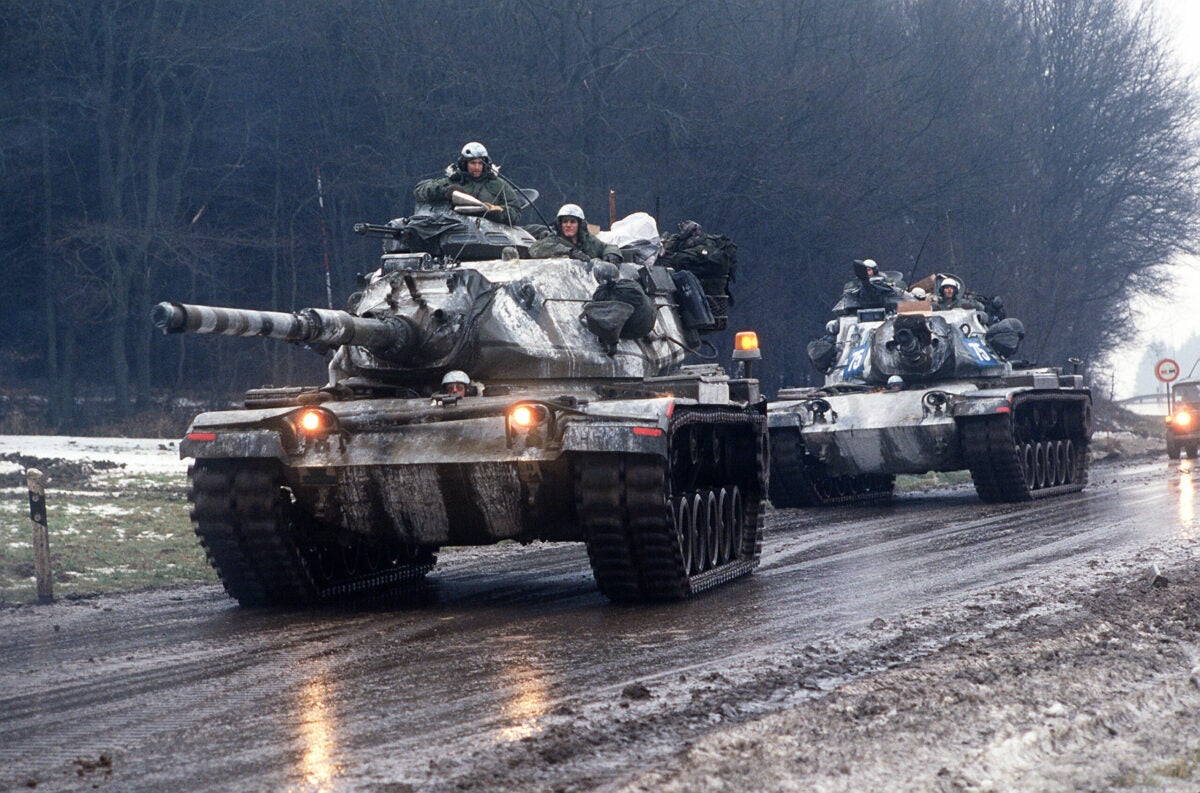 General George S. Patton’s commands during WWII were characterized by fast and aggressive mobilized charges. At the spearhead of these advances were his tanks. Originally trained in horseback cavalry, Patton established the American Expeditionary Force’s Light Tank School during WWI and embraced the new machine’s role on the modern battlefield. Fittingly, his name is featured heavily in the American tank line that would follow WWII.

America’s primary tank during WWII was the M4 Sherman Medium Tank. However, while the Sherman served well in an infantry support role, it suffered in tank-on-tank battle. The Sherman’s armor and gun were outclassed by the German heavy tanks like the fearsome Tiger. In response, the U.S. Army developed the M26 Pershing Heavy Tank which saw limited action at the end of WWII. After the war, the M26 was redesignated as a medium tank. Though its gun was an improvement over the Sherman’s, the Pershing lacked the mobility required of a medium tank. To fix this, the Army fitted it with an improved engine, transmission, and a new gun. About 800 Pershings were modified in this way and renamed the M46 Patton. The new M46 entered service in 1949 and saw action in Korea where it proved very capable against the North Korean T-34 Medium Tanks. Still, the M46 only made up about 15% of the U.S. tank strength in Korea during the war.

The M46 Patton was upgraded with a new turret that featured increased protection for the crew and a rangefinder. Classified as a main battle tank (MBT), it entered service as the primary tank of the U.S. Army and Marine Corps in 1951. Moreover, unlike the M46, it was heavily exported to SEATO (Southeast Asia Treaty Organization) and NATO allies. It is the only Patton series tank that did not see combat with the U.S. Interestingly, it is also the last U.S. tank to feature a bow-mounted machine gun in its hull. With the arrival of the new M48, the M47 was eventually declared obsolete and relegated to a target practice role.

Introduced in 1952, the M48 Patton was designed from the ground up. It improved primarily upon the protection, mobility, and fuel efficiency of the M47. Like the M47, it served as the primary tank for both the Army and Marine Corps and served extensively in Vietnam. Though the conflict saw few tank-on-tank battles, the M48 performed admirably in an infantry support role. When the U.S. withdrew from Vietnam, many M48s were handed over to ARVN Forces. In Vietnamese hands, the M48 managed to defeat PAVN T-34 and T-55 tanks. However, due to fuel and ammo shortages, these victories were short-lived. Like the M47, the M48 was heavily exported and is still in service with Greece, Turkey and Taiwan.

The fourth and final tank to bear Patton’s name, the M60 is a second generation main battle tank. Although it was developed from the M48, it was never officially named Patton. Still, the name stuck. The M60 entered service in 1959 and reached operational capability the next year. However, its first action was during the 1973 Yom Kippur War. In the hands of Israeli tankers, the M60 performed well against the Soviet-built T-72s. Upgraded with explosive reactive armor, the Israeli M60s again saw combat during the 1982 Lebanon War. The M60’s first American action came the next year during Operation Urgent Fury with the Marines in Grenada. During Operation Desert Storm, the Marines again employed the M60 with great effect. It proved deadly against the Iraqi Army’s Soviet-built armored vehicles and tanks.