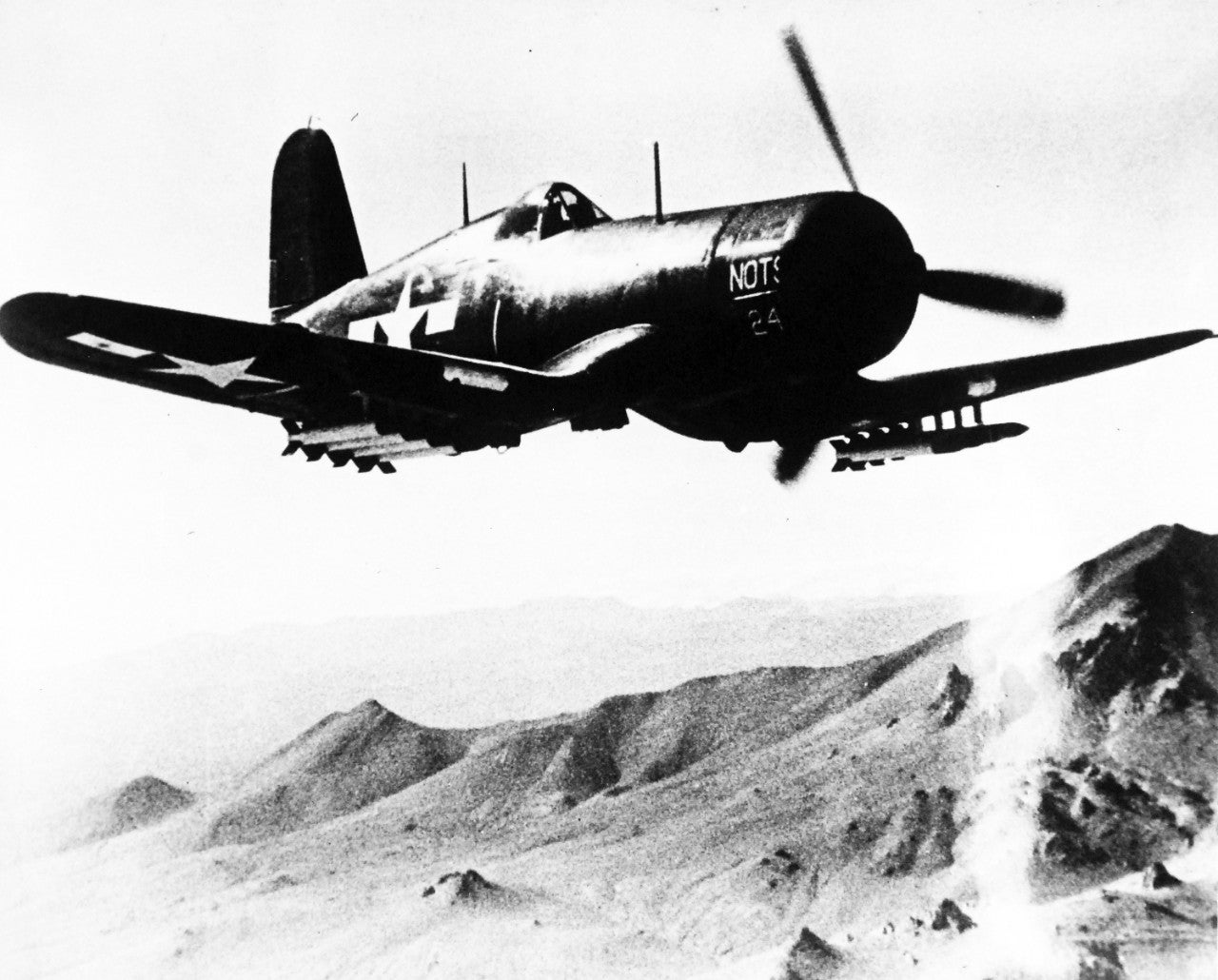 The Vought F4U Corsair is an iconic WWII fighter plane. Thanks to its distinctive long nose, inverted gull wing and appearance in the classic TV show Baa Baa Black Sheep, the Corsair has etched itself into the minds of many Americans. Moreover, the Corsair was an exceptional fighter plane that outperformed many Allied and Axis fighters. However, this performance came at a dangerous cost which set the Corsair on a different path than originally intended.

In 1938, the U.S. Navy Bureau of Aeronautics published a request for a high-speed single engine fighter plane to lead its carrier air wings into the next decade. Vought responded with its Corsair prototype. Equipped with a 1,805 hp Pratt & Whitney engine, the Corsair became the first single-engine U.S. fighter to fly faster than 400 mph in 1940. With further development, the Corsair achieved excellent climb rates and dive speeds making it a very capable fighter.

On July 31, 1942, the first F4U-1 Corsair was delivered to the U.S. Navy. Fitted with an improved Pratt & Whitney engine capable of 2,000 horsepower, the Corsair had a top speed of 446 mph. This was exceptional for a carrier-based fighter. For comparison, the legendary F6F Hellcat, which ended the war with a kill ratio of 19:1, had a top speed of 391 mph. However, the large engine and fuel tank at the front of the Corsair forced the cockpit further back along the airframe. Its large propeller also necessitated long landing gear. While this resulted in an elegant-looking aircraft, it meant that Corsair pilots had to orient the plane’s nose up to the point of losing sight of the deck during landings.

Due to the nature of carrier landings, the required nose-up attitude of the Corsair made it a deadly challenge for pilots to land. Many had to approach the deck nearly sideways and straighten out at the last minute in order to maintain visibility. Moreover, the Corsair had a tendency to stall one wing before the other during landing. As a result of all this, Navy pilots nicknamed the Corsair the “hog,” “hosenose” and “bent-wing widow maker.”

Despite the Corsair passing its carrier qualification trials, the Navy didn’t want it anymore. Though the F6F Hellcat didn’t have the same performance as the Corsair, it was much easier to land on the deck of a carrier. As such, the Navy equipped its fighter squadrons with Hellcats and divested most of its Corsairs to the Marine Corps. The Marines flew primarily from land bases anyway and eagerly took on the more powerful Corsair. This also streamlined maintenance for carrier wings and Marine airfields.

The Corsair was a natural fit in the Marine Corps. With the Marines’ doctrine of combined air and ground operations, the Corsair excelled as a fighter-bomber. Loaded with bombs, napalm tanks and rockets, the Corsair provided accurate and deadly close air support to the Marines on Peleliu, Iwo Jima and Okinawa. Famed aviator Charles Lindbergh conducted experiments as a civilian advisor to determine how to maximize the Corsair’s range and payload and even conducted strikes on Japanese positions in the Marshall Islands.

Although repurposed from its original design, the Corsair was instrumental in winning the war in the Pacific. It flew 44% of all Navy and Marine fighter sorties and earned a kill ratio of over 11:1. Moreover, the Corsair flew the majority of U.S. fighter-bomber missions during the war. It delivered 15,621 short tons of bombs, or 70% of all bombs dropped by U.S. fighters. The Corsair continued its close air support role in the Korean War and was flown by the first African American U.S. Naval aviator, Ens. Jesse L. Brown.