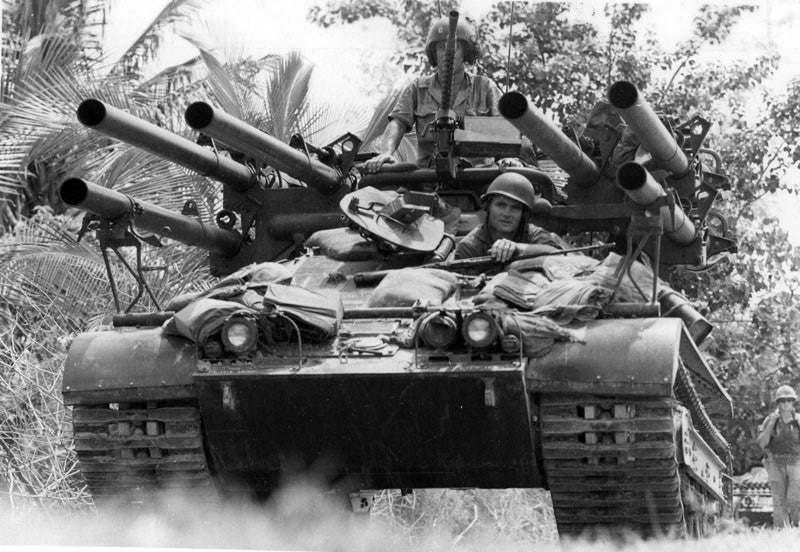 The M50 Ontos might be the craziest-looking armored vehicle in American history. But with six mounted recoilless rifles, the tank-killer design did more than its fair share of work on the battlefield, whether it was with the Army or the Marines. The Marine Corps would eventually find more use for it than the Army.

This tracked vehicle behemoth was first designed to be a lighter-weight, air-transportable tank destroyer in the 1950s. To do this, it used two arms holding three manually loaded 106 mm recoilless rifles each. It was a powerful weapon, both facing the enemy and anything unfortunate enough to be behind it when it fired all six rifles.

During its trials at the Aberdeen Proving Grounds in the mid-1950s, it successfully tested each of its turrets in single fire mode. But when the M50 fired all six turrets at the same time, the blast from the combined force smashed the masonry on nearby buildings and destroyed the rear windows in several parked vehicles.

The Army ultimately decided to cancel the production of the M50 as an anti-tank weapon because crews needed to leave the safety of the armor to reload the recoilless rifles. Another issue with the tank was that it could only carry a limited number of rifle rounds, given the small size of the tank and the need for mounted machine guns to defend the crewmen.

The People’s Army of Vietnam, also known as the North Vietnamese Army, fielded tanks in combat against American and South Korean troops, but not at the same levels U.S. troops had experienced in wars past. NVA tanks were seen in combat, but were nowhere as numerous as the pitched tank battles of World War II or the Korean War.

When the U.S. Marine Corps brought the M50 Ontos to bear on the communists in Vietnam, they began to use its six recoilless rifles as an infantry support weapon. This direct fire support was never its intended use but it brought significant firepower to the battlefield for the Marines.

It was a highly mobile weapon, light enough to cross the pontoon bridges used by Americans in Vietnam, It was also able to be carried by CH-53 Sea Stallion helicopters along with a platoon of Marines and be dropped anywhere in the country. Time and again, its performance with Marines in combat was so effective, the enemy would break and run from fortified positions at the mere sight of its spotting round.

The Marine Corps used the M50 in Vietnam until 1969 and handed what was leftover to the Army, who used them until they ran out of parts for the vehicles. When they could no longer move on their own, the soldiers turned them into defensive fire positions.